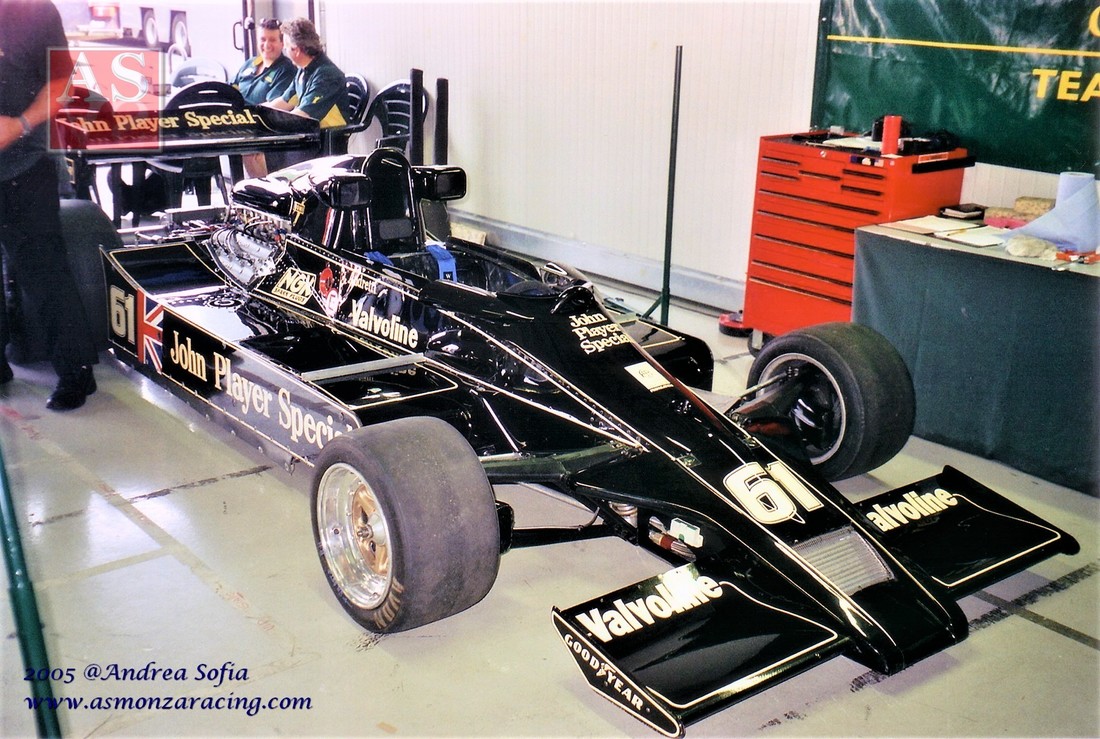 The Lotus 78 MkIII was the car built to run in the Formula 1 World Championship in 1977 and is to be considered as the first "wing car" ever designed and built. Designers Peter Wright, Ralph Bellamy, Charles Prior, Tony Rudd made a state-of-the-art, aerodynamic car. The studies in the wind tunnel, which began in December 1975 on an inverted wing profile applied to the sides of a car, showed a significant increase in aerodynamic load, assuming that such a device would increase vehicle adherence and increased the speed in the corner. These studies served to define the essential lines of the new car. The first Lotus 78 track tests took place at the end of the 1976 season, but Colin Chapman wanted to wait until the beginning of the 1977 season to make its debut in the Grand Prix. The debut took place at Argentinian Grand Prix in 1977 with Mario Andretti at the wheel and the season ended with the second place in the World Championship for Lotus and third in the Drivers World Championship for Mario Andretti. In 1977, the Lotus 78 won 5 Grand Prix, 4 with Mario Andretti and one with Gunnar Nilsson, to show that the road that was taken was the good one. The car also started the 1978 season, waiting for the new Lotus 79 to be ready for the debut and scored two victories, one with Mario Andretti at the Argentinian Grand Prix and one with Ronnie Peterson at the South African Grand Prix. The Lotus 78 was also the last car run by Ronnie Peterson, at the Grand Prix of Italy in 1978.
The Lotus 78 chassis was built in a traditional manner, using aluminium alloy panels, the nose and the front  bodywork were not part of the monocoque and were made of fiberglass. The front of the car was pretty tight, the fuel tanks were 3, the main was behind the driver, the other two were on the sides, one on the right and one on the left. In all the capacity was just over 170 litres and the fuel tanks were in rubber and cellular sponge.
The cockpit was particularly advanced and between the normal instrumentation you notice the large orange bulb of the oil pressure warning light. On the left side of the cockpit, you see the control lever to adjust the hardness of the rear anti-roll bar.
The Lotus 78 had two large sides that, besides containing the two tanks, also housed the two water radiators, one on the right and one on the left almost vertically positioned. The sides were designed with the shape of the bottom bends to create an inverted wing profile. The lower edge of the vertical bulkheads was fitted with a seal initially consisting of a series of nylon flexible brushes and then refined with ceramic mini-skirts equipped with preloaded springs that provided ground adhesion.
The area between the driver and the engine, in addition to hosting the main fuel tank, housed the oil tank while the oil radiator was placed on the nose. Overall, the Lotus 78 at the debut did not have a good mechanical balance, resulting rather unbalanced in the weight distribution to the back. Several changes were made during the season to improve weight balance.
The front suspension had a lower triangle with a very large base and an upper rocker arm, inclined to the longitudinal axis of the car that activated the vertical shock absorber. The front track was very wide to allow the airflow to channel inside and below the sides with smaller turbulence sources.
The rear suspension was very traditional and provided a lower triangle, two upper arms and a single radius rod. The inclined shock absorber, the  internal brake calipers and discs, the low exhaust pipes, and air extractor inexistent, make it clear how the rear-facing aerodynamics study was still at the dawn. 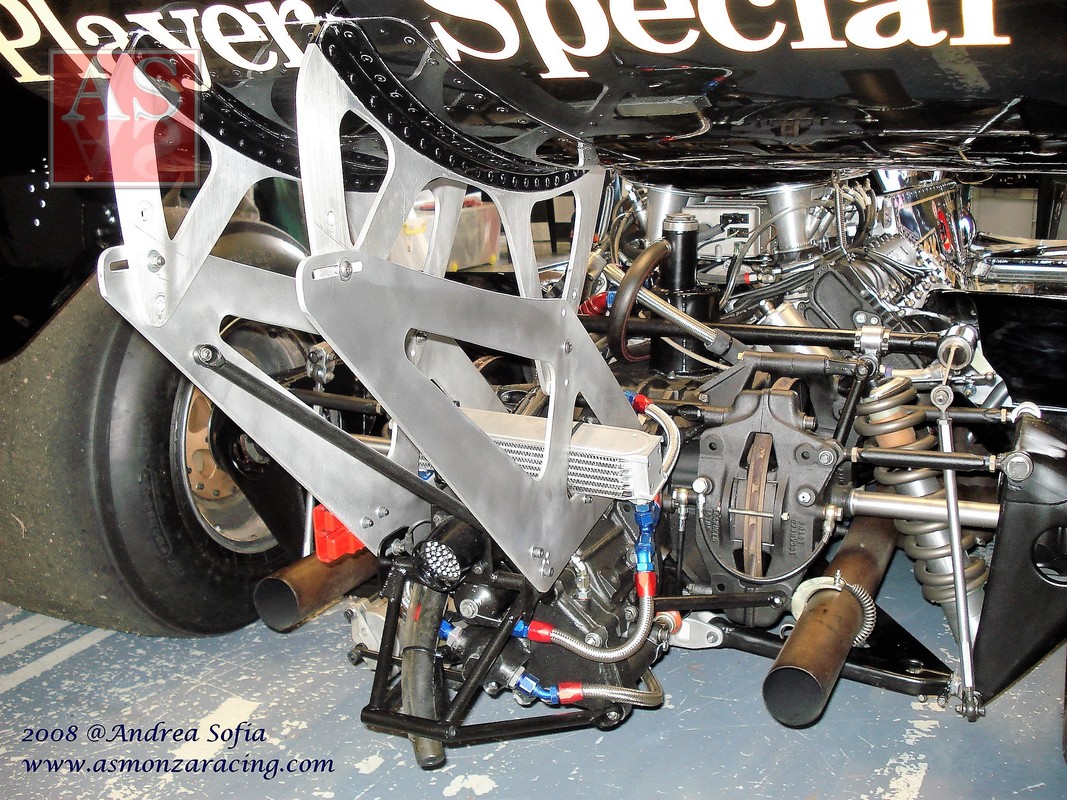 The large rear wing had a central support with extensive adjustment options. Despite the trend of the period were wing with lateral supports, the Lotus opted for the central support, believing that with the side supports the wing would flex. 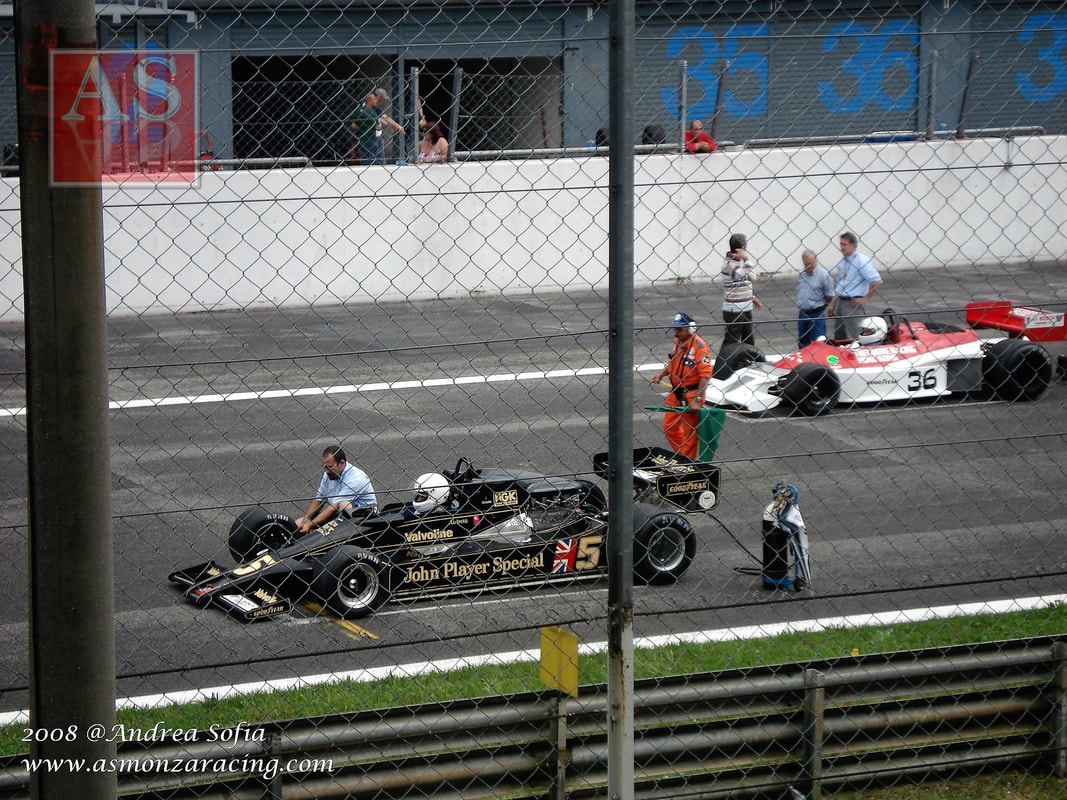 The Lotus 78 Mk III chassis 04, photographed on the starting grid during the Intereuropa 2008 Cup in Monza. Number 4 was the last chassis built, used by Gunnar Nilsson at the end of the 1977 season. During the 1978 season, Héctor Rebaque bought and run the cars #4,#1 and #2. 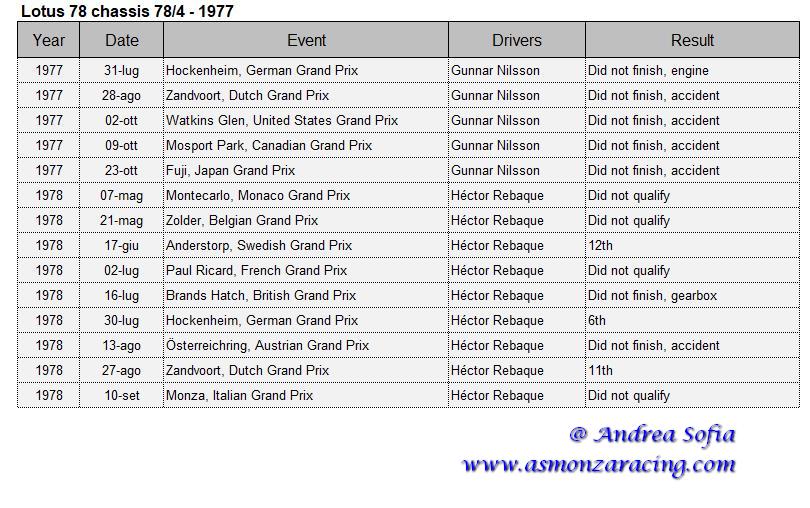