Classic appointment at the Autodromo Nazionale di Monza for the 500 Km, opening race of the 1986 European Touring Championship and also the first race of the season at the Autodromo Nazionale. The big favorites of the European series were the Tom Walkinshaw Team's Rover Vitesse, entered for the expert crews composed by Jean-Louis Schlesser - Armin Hanhe, Tom Walkinshaw - Win Percy and Jeff Allam - Eddie Joosen but the competition in the third division (displacement over 2500cc.) promised to be particularly fierce. The Rover finished the race in first and second place, replicating the victory obtained at the 500 km of the previous year. Third place for the BMW 635 CSi driven by Dieter Quester and Otto Rensing. The second division was won by the new BMW 325i managed by Linder Rennsport and driven by the Germans Winfried Vogt and Markus Oestreich while the first division was conquered by the Toyota Corolla GT AE86 of the Bemani Toyota Schweiz Team, fifteenth overall, with the Swiss drivers Philippe Müller and Bruno Eichmann. 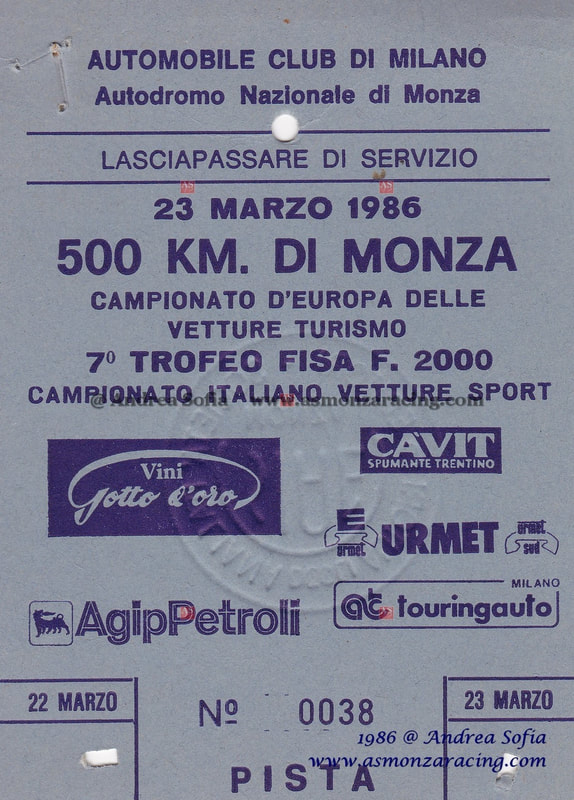 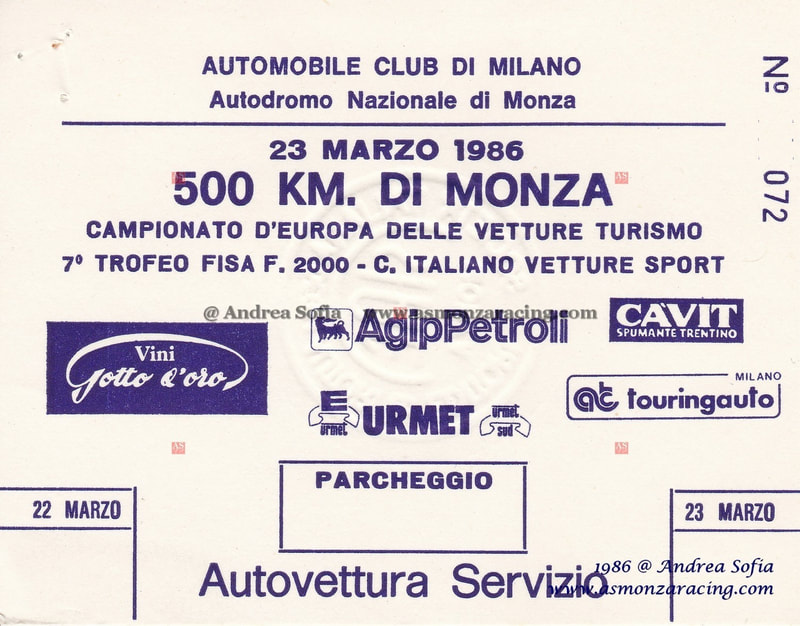 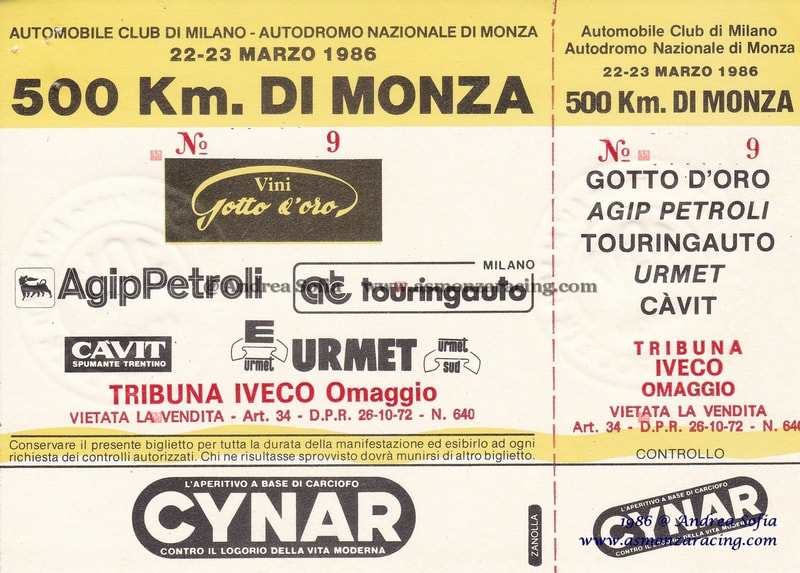 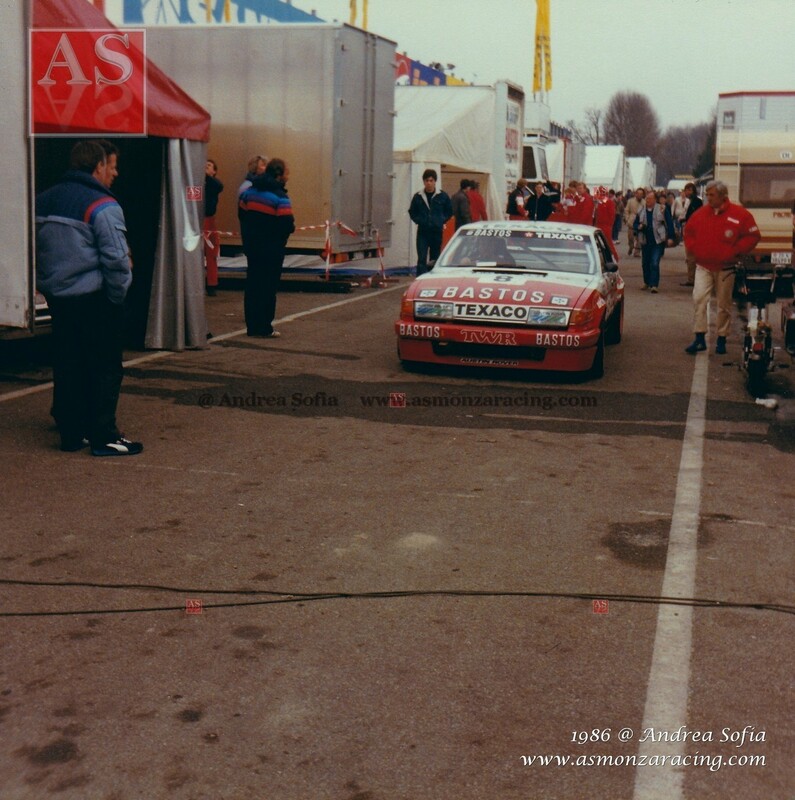 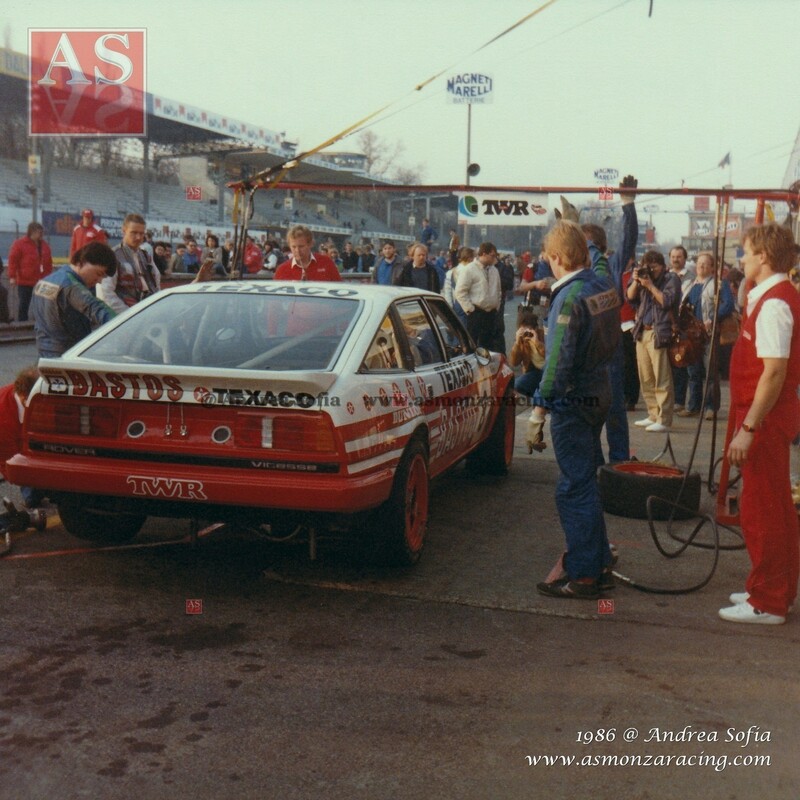 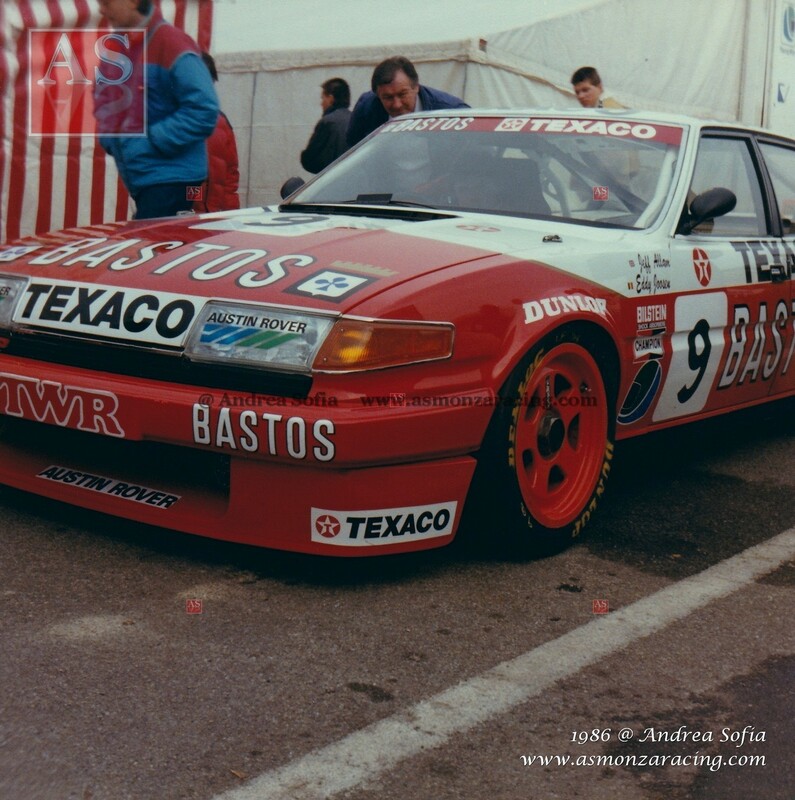 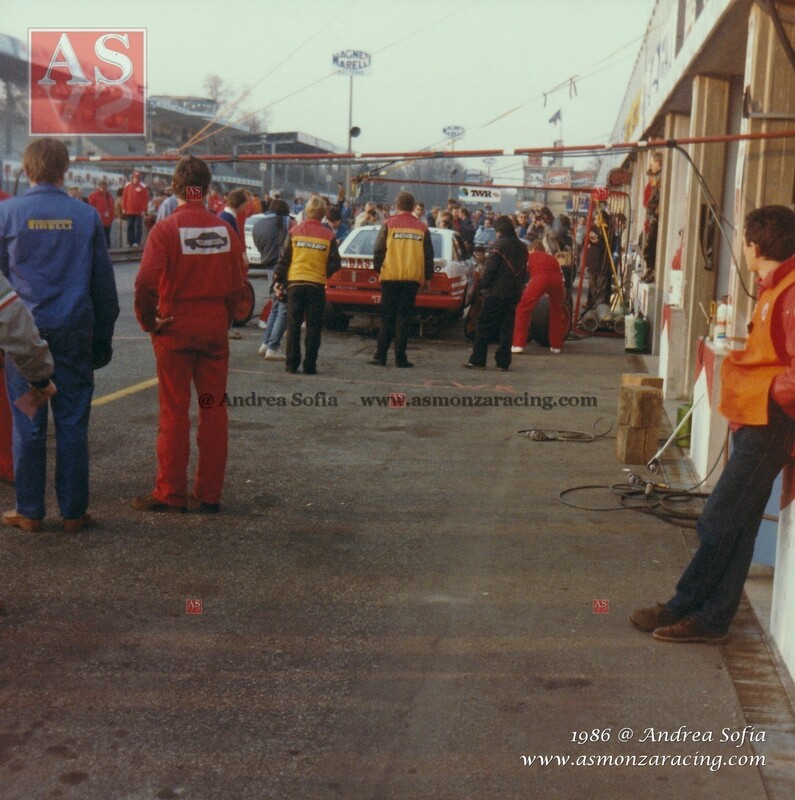 Monza, 500 Km 1986 Rover Vitesse TWR 3.5 V8 #8 Bastos Texaco Racing Team, Walkinshaw-Percy
With over 340 hp released from the English 3532 cc V8, the three Rover Vitesse arrived in Monza and dominated. The crews consisted of very experienced and equally fast drivers. The car number 7, entered for the French champion of the specialty Jean-Louis Schlesser and for the German Armin Hanhe scored the pole position, the number 8 of Tom Walkinshaw and Win Percy was fifth and the number 9 of Eddie Joosen and Jeff Allam sixth. The three saloon cars were equipped with Dunlop tyres. The Tom Walkinshaw Team's race tactic was clear from the start. At the very fast Schlesser-Hanhe crew was assigned the task of acting as a hare, tiring the formidable competition opposed by the Volvo and the surprising Holden Commodore. So it went the race, Volvo and Holden were KO ed and at the right time the three TWR Rover jumped to the lead, first, second and third. The race was won by Walkinshaw-Percy and in second place ended Allam-Joosen while Schlesser-Hanhe's car was forced to retire due to the breaking of the front suspension. Speed, reliability and tactics, perfect race.
Ford Sierra XR4 Ti 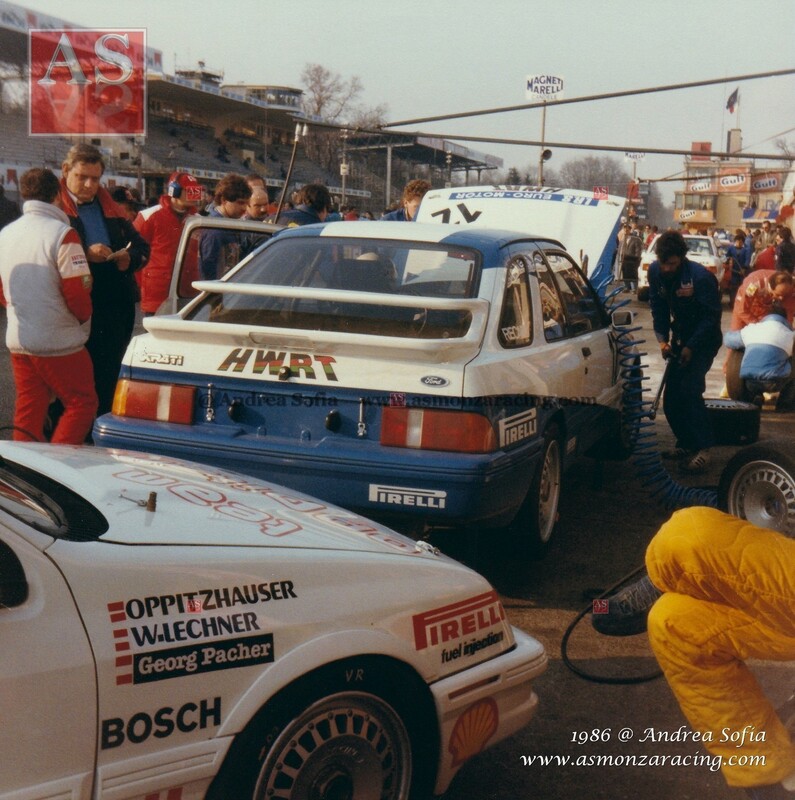 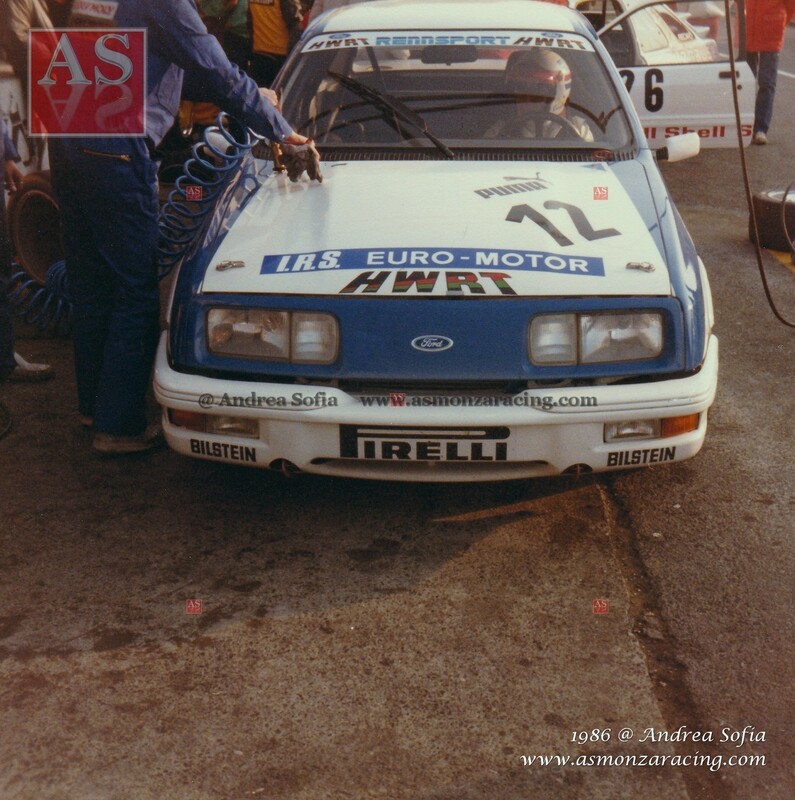 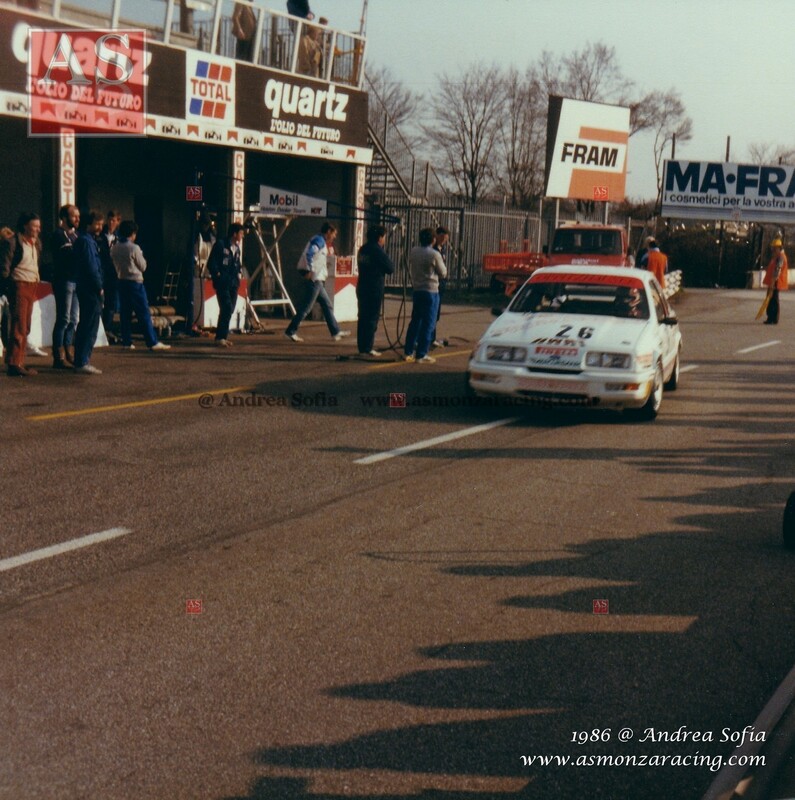 Monza, 500 Km 1986 Ford Sierra XR4 Ti #26 Oppitzhauser Racing Team, Pacher-Oppitzhauser-Lechner
Still in development after the sporadic appearances in some races of the past season, the Ford Sierra XR4 Ti were present at Monza with two cars prepared by Eggemberger for the crews formed by Steve Soper - Klaus Niedzwiedz and Siegfried Müller- Pierre Dieudonné, a car managed by the German Team HWRT Wolfe with the drivers Harald Grohs - Roman Feitler and a car for the Oppitzhauser Racing Team driven by Georg Pacher - Karl Oppitzhauser - Walter Lechner. Still short of preparation and with an inadequate number of hp the Sierra were not perfect even in the set-up that with a high rolling did not suit the fast corners of Monza. At the end of the qualifying practices the Eggemberger Team's work Sierra finished in eleventh place with Müller-Dieudonné while the sister car of Soper-Niedzwiedz was only fifteenth. Better made the HWRT Team's private car who placed ninth with Grosh-Feitler. Still a private car at the fourteenth place, the one driven by Pacher-Oppitzhauser-Lechner. No Ford at the finish line and the only one who distinguished, the car of HWRT Team, to underline the lack of global competitiveness of the Fords which however recovered by winning the European championship in 1988.
Volvo 240 Turbo 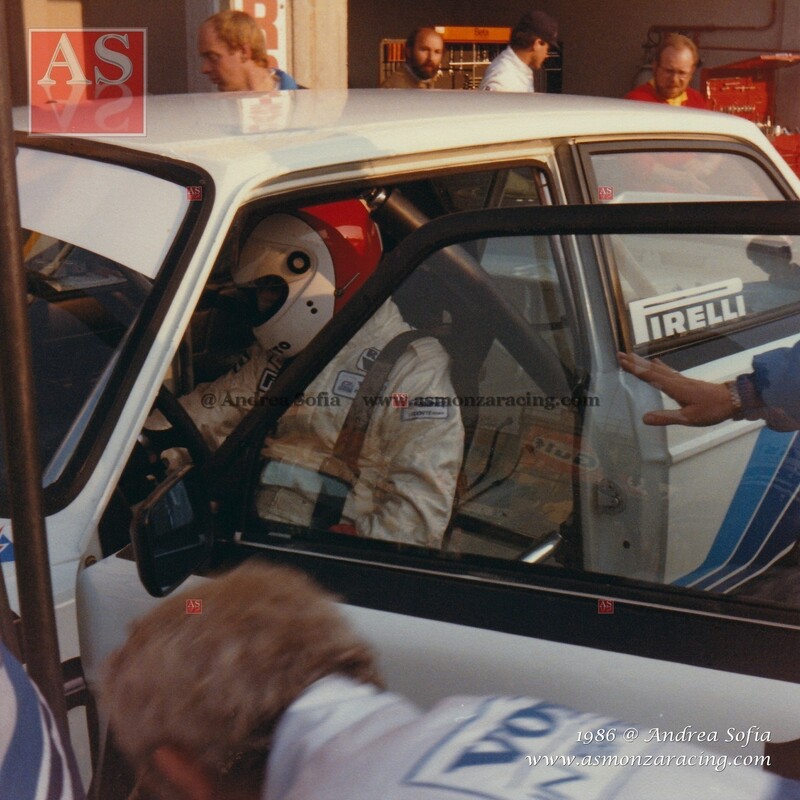 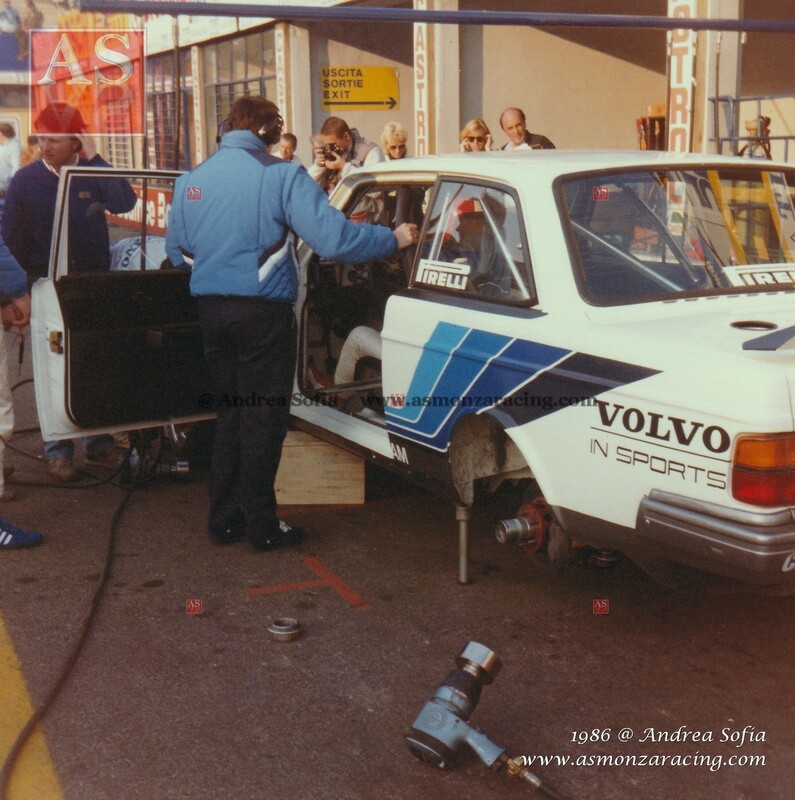 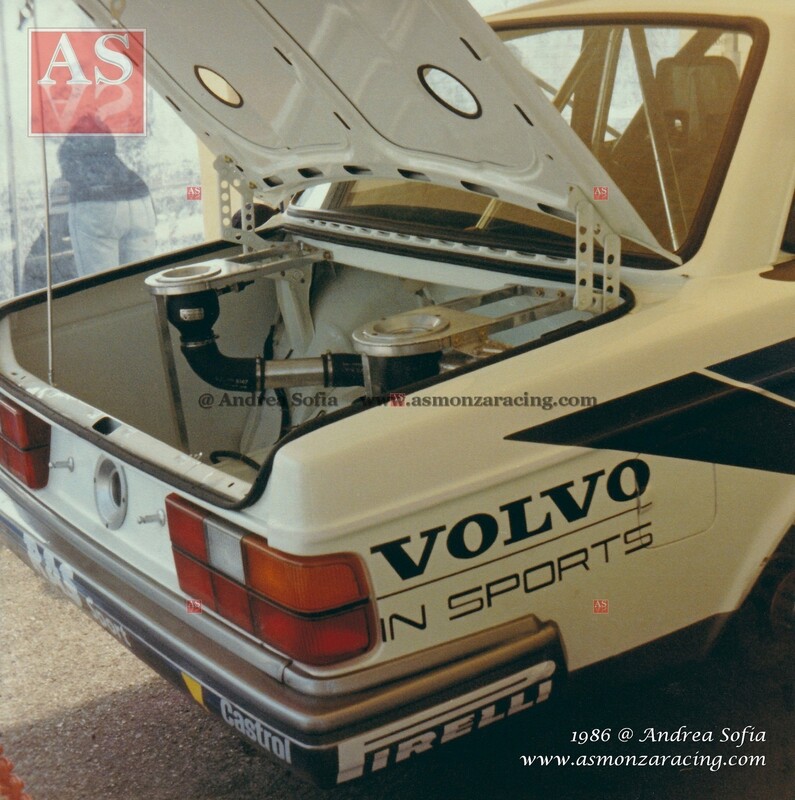 Monza, 500 Km 1986 Volvo 240 Turbo #2 RAS Sport, Grandberg-Olofsson
The Volvo took to the field at Monza with 2 cars entered by the Belgian Team Ras Sport, which replaced the preparer Eggemberger. Equipped with the straight 4-cylinder 2145cc turbo engine capable of delivering 340 hp, the Swedish sedans had undergone several modifications both in the set-up and in the engine compared to the 1985 version, among which the most important was the adoption of the water injection system that even if it caused a weight increase of almost 30 Kg plus a 30 liter tank for the liquid, allowed a considerable increase in power. The top drivers were Thomas Lindström, winner of the 1985 drivers' title and Johnny Cecotto, returning to competition after the serious accident suffered at Brands Hatch in 1984 with the Formula 1 Toleman. The second car was also driven by a very respectable pair composed by Ulf Grandberg and Anders Olofsson. In practice both the Volvo 240 Turbo with the Pirelli tyres proved to be very fast, scoring second and third respectively with Grandberg-Olofsson and Lindstrom-Cecotto and so it was also in the race where they fought long for the lead position. During the driver change at mid-race Lindstrom-Cecotto's car remained in the pits with an electrical problem and by the time he left it was now hopelessly delayed and ended the race in eighth place. On lap 63, Grandberg-Olofsson's car, leading at the time, entered the pits with injection problems and was forced to retire.
BMW 635 CSI Team Schnitzer 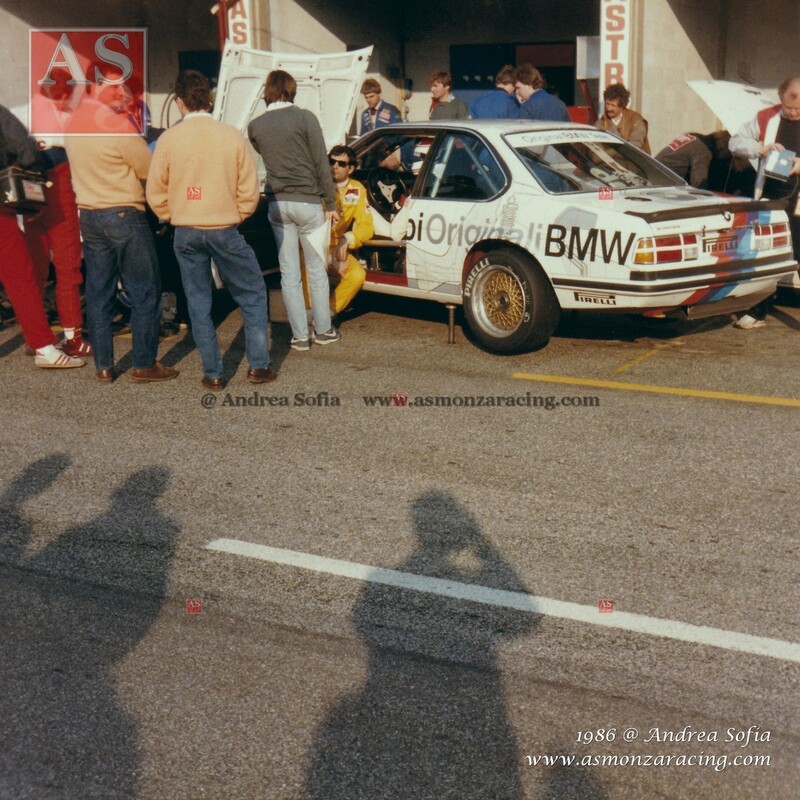 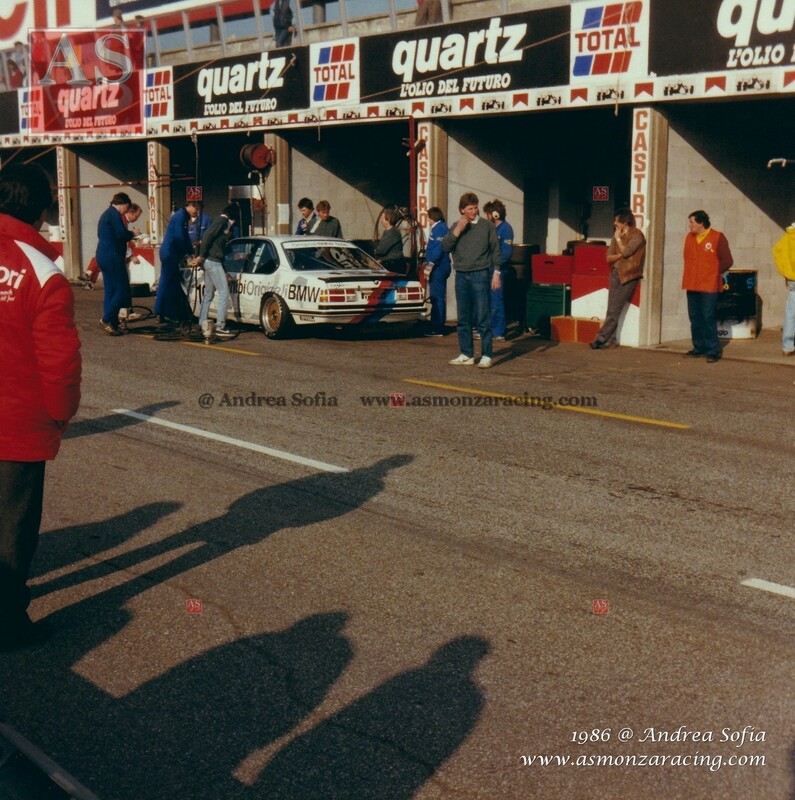 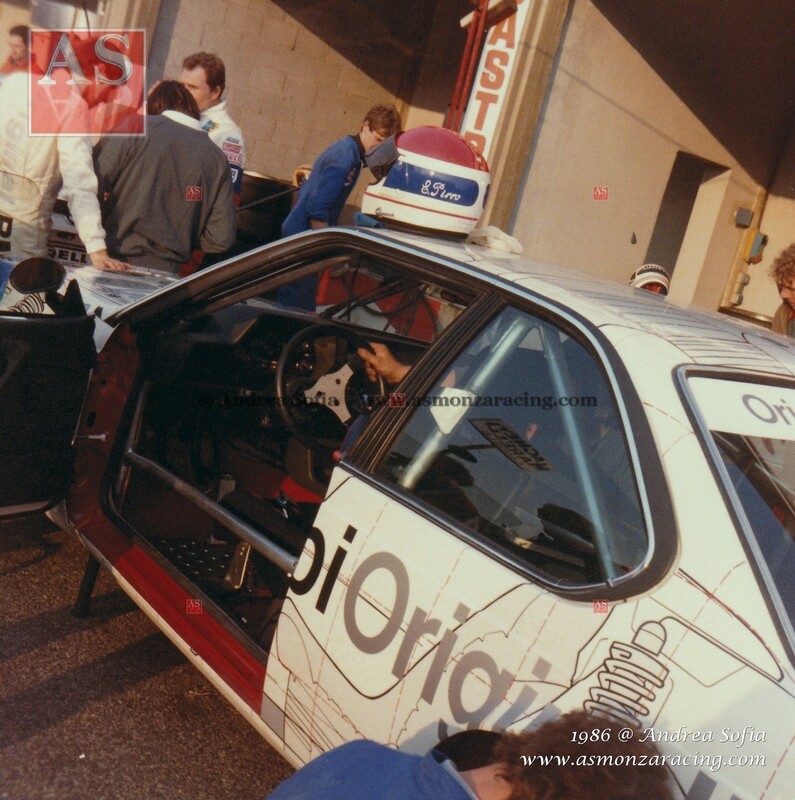 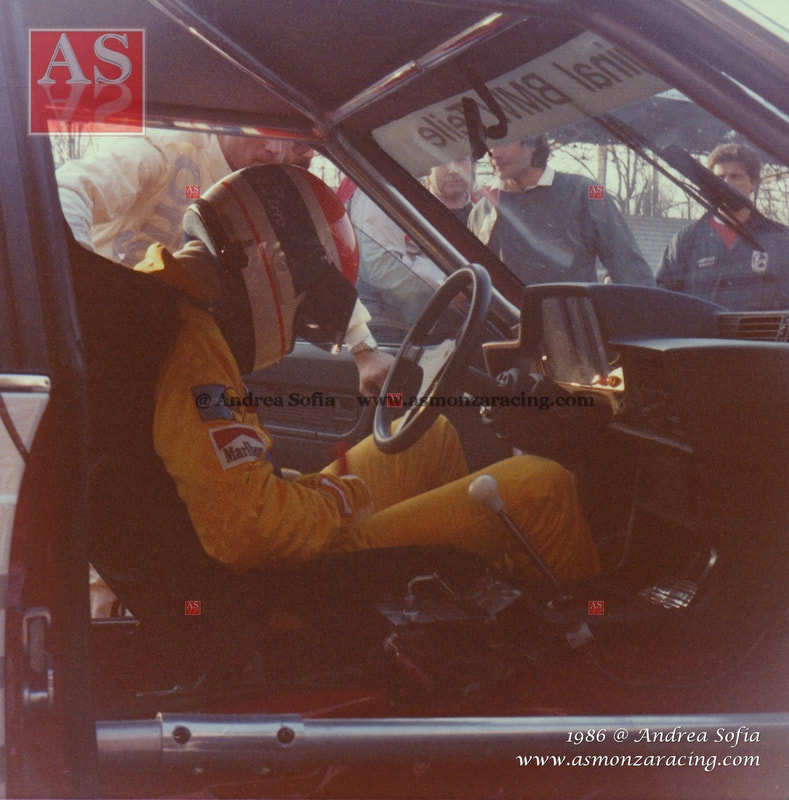 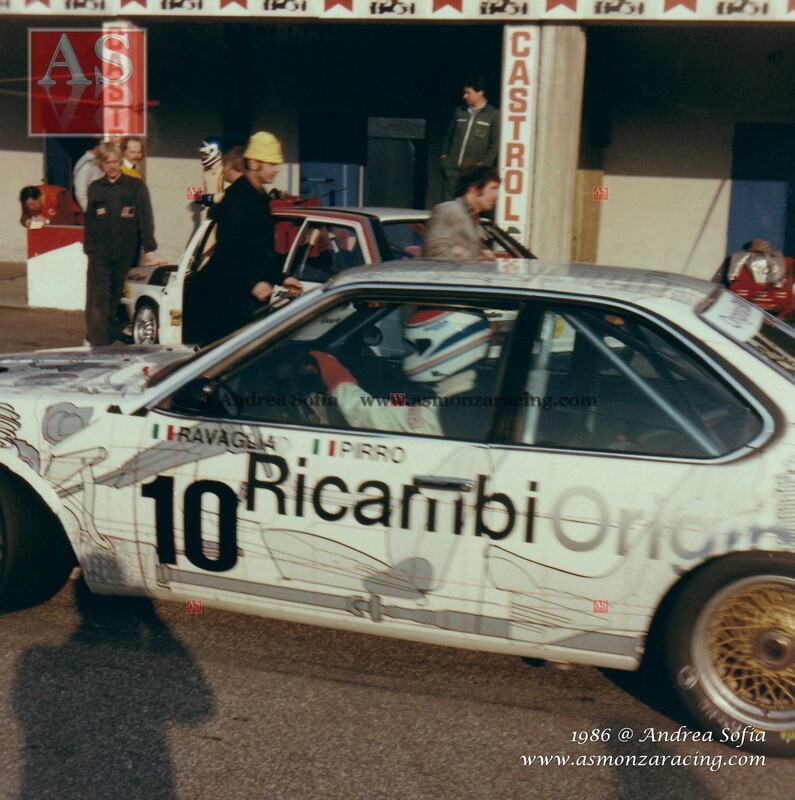 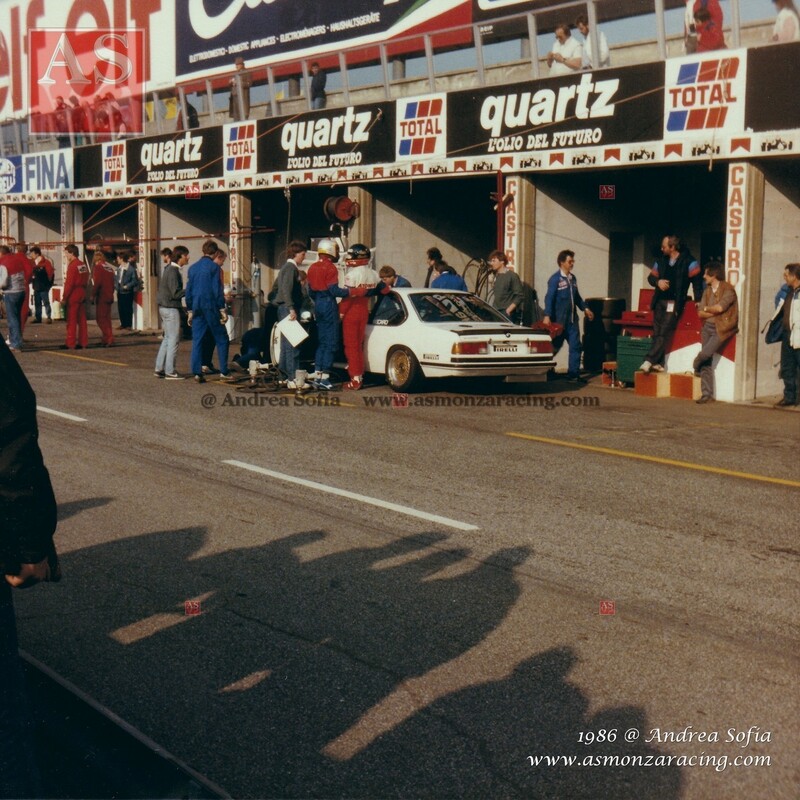 Monza, 500 Km 1986 BMW 635 Csi #11 Team Schnitzer, Quester-Rensing
Many changes were made during the winter to the 635 CSI coupe, at least to those of the Schnitzer official team, but the cars for 1986 were not yet ready and the team showed up at Monza with two cars that were however still in 1985 configuration, with only 300 hp they had no ambitions of victory. The crews were made up by the experts drivers Roberto Ravaglia and Emanuele Pirro who replaced Gerhrard Berger engaged with Formula 1 and Dieter Quester supported by the young Austrian Otto Rensing. In addition to the two works cars, another 10 BMW 635 Csi cars went to Monza, running by private teams. Ravaglia-Pirro turned out to be the fastest among the Bavarian coupes scoring the fourth row with the eighth time while Quester-Rensing were tenths. In the race the Schnitzer team drivers, despite the lack of power, fought hard and after the withdrawal of Ravaglia-Pirro, which took place on lap 25 due to a broken wheel, Quester-Rensing managed to reach a third position saving BMW's honour.
Holden VK Commodore 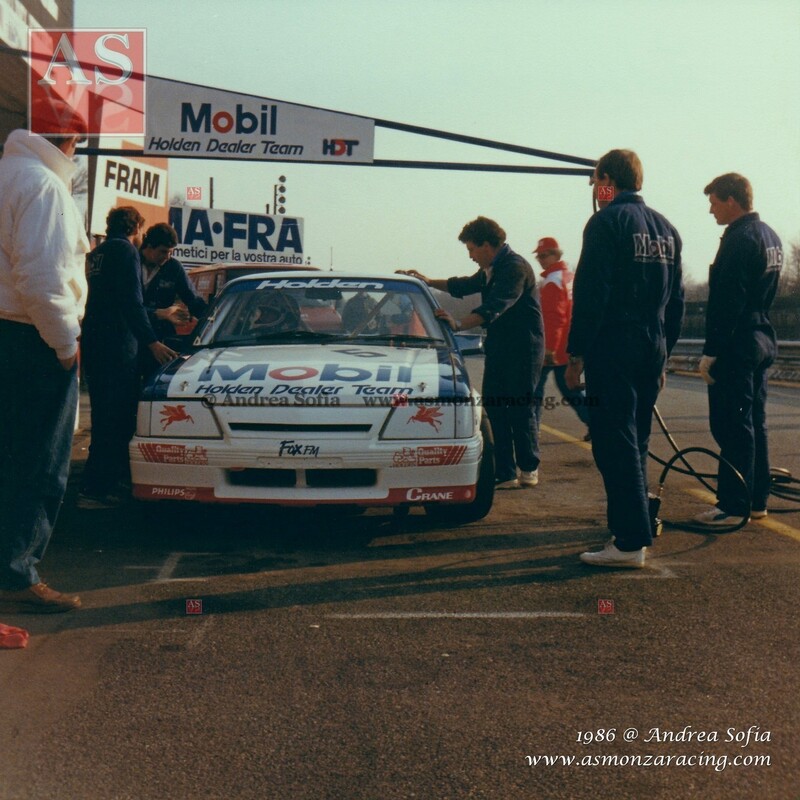 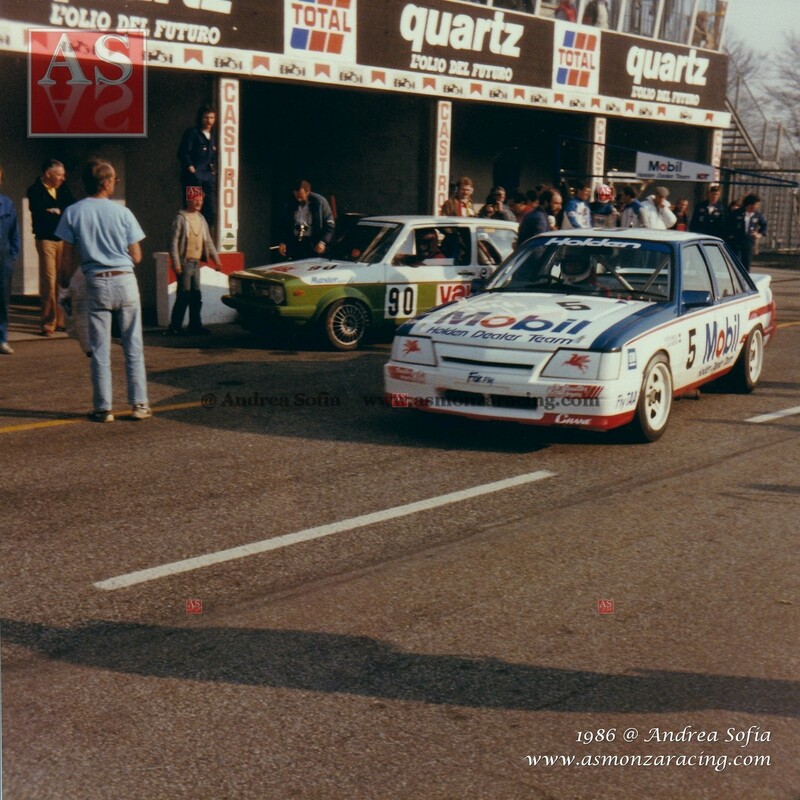 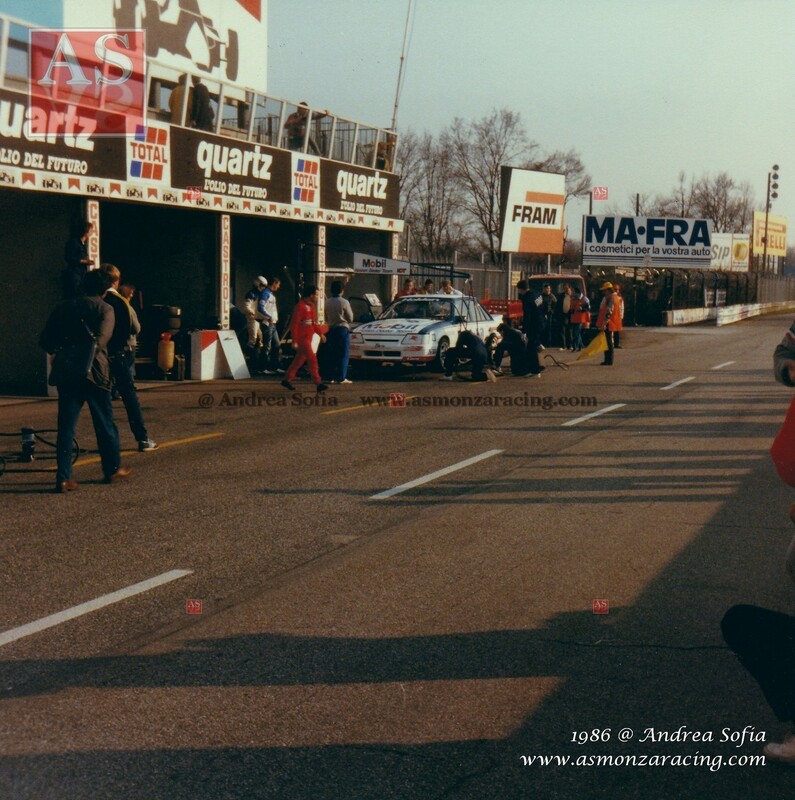 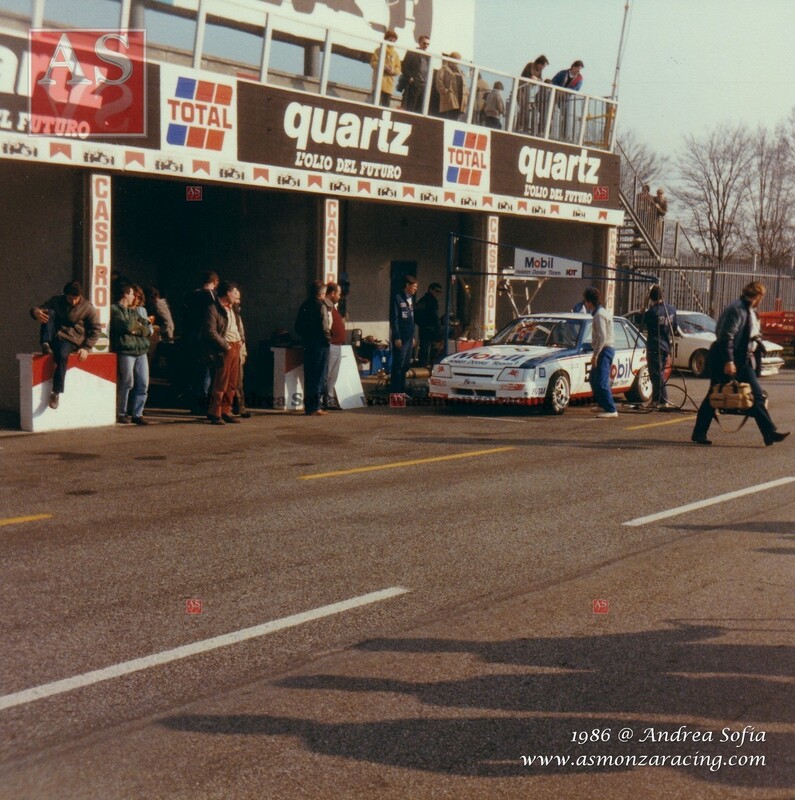 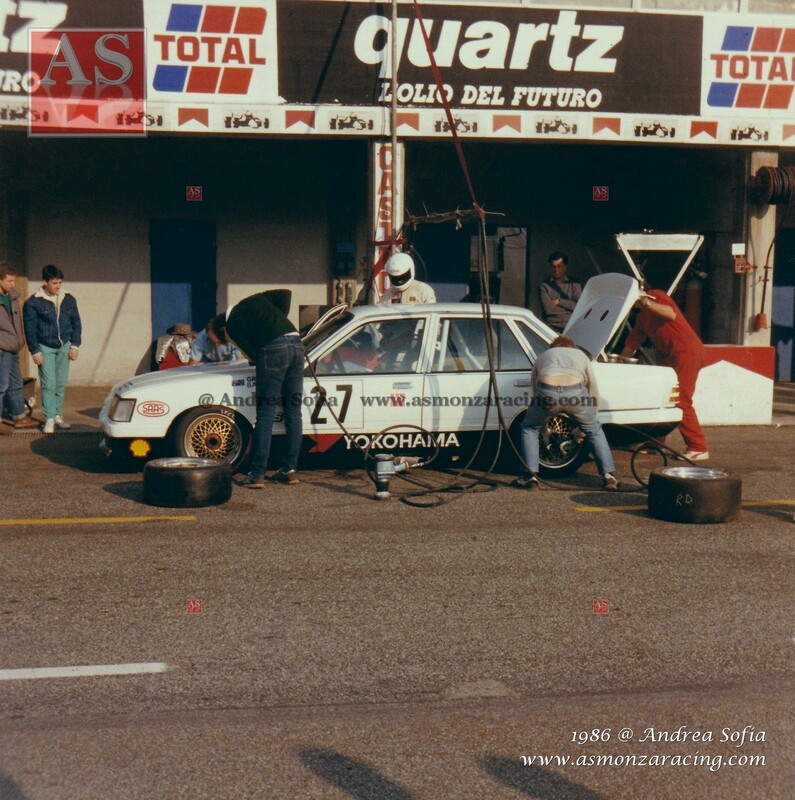 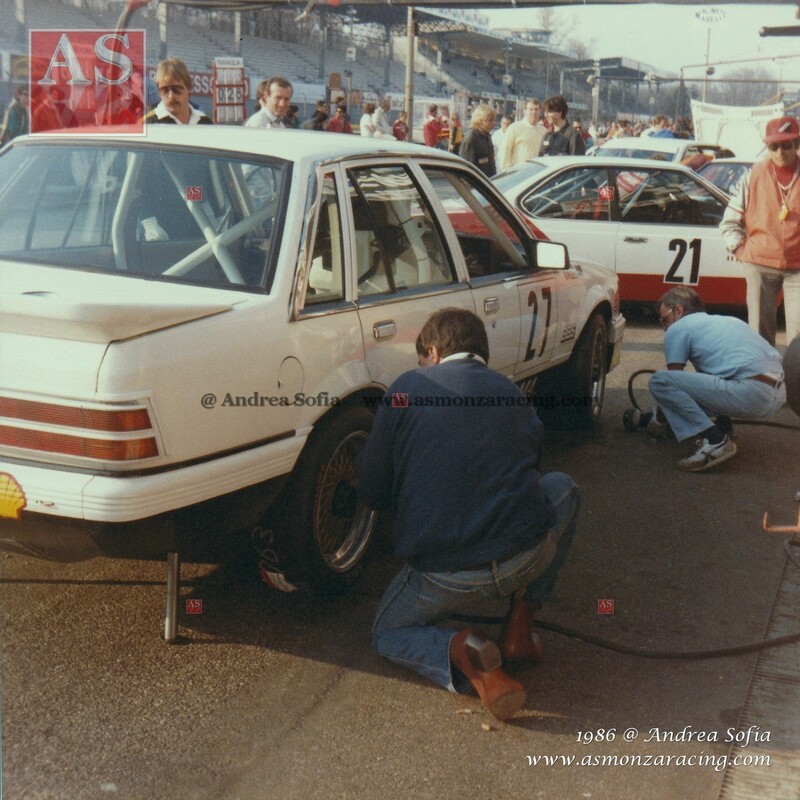 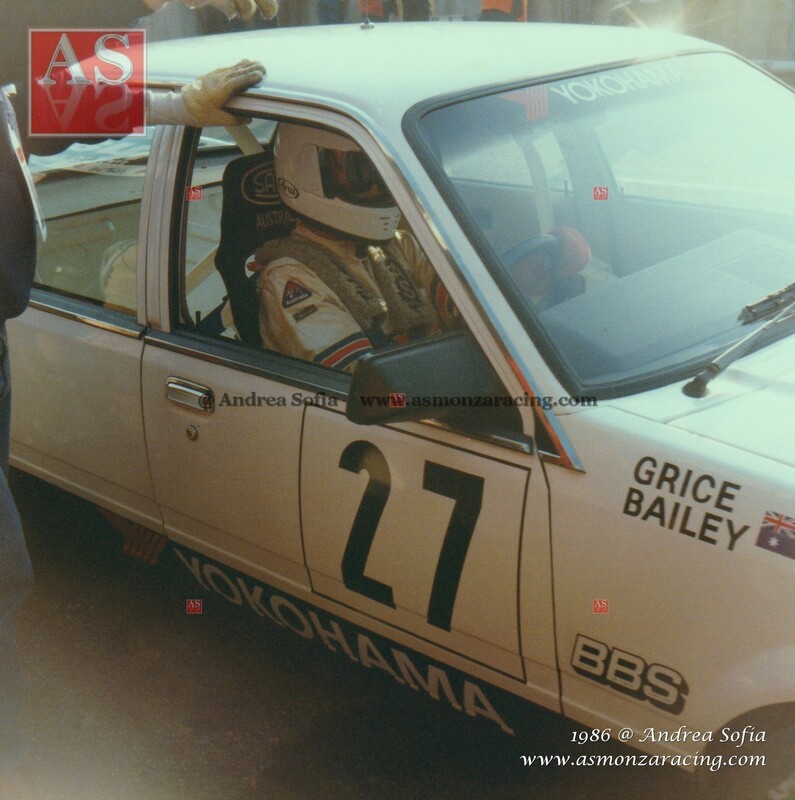 Monza, 500 Km 1986 Holden VK Commodore #27 Australian National Motor Racing, Team, Grice-Bailey
The novelty of the 1986 European Touring Championship was the presence of the two Holden Commodore coming from the Australian production Championship. One car was managed by the Australian National Motor Racing, with Allan Grice and Graeme Bailey (who in 1986 won the Bathurst 1000) and the other one from the Mobil Holden Dealer for the champions Peter Brock and Allan Moffat. The two teams arrived in Monza at the last moment but immediately they turned into light, running so fast that at the end of practice they finished fourth with Grice-Bailey and seventh with Moffat-Brock. The Australian saloons were very well prepared in terms of set-up and were equipped with not very sophisticated 5-liter V8 engines with rods and rockers capable of delivering more than 400 hp and pushing the cars to over 260 km/h. On the first lap the Grice's Holden was second behind Schlesser's Rover and on the fifth lap he took the lead but before half race while Graeme Bailey was at the wheel he went out at the ascari chicane and finished the race in the sand. Even the other Holden did not pass half the race and after being an excellent protagonist was forced to retire due to transmission problems.
Mercedes 190 E 2.3-16 Snobeck Racing Team 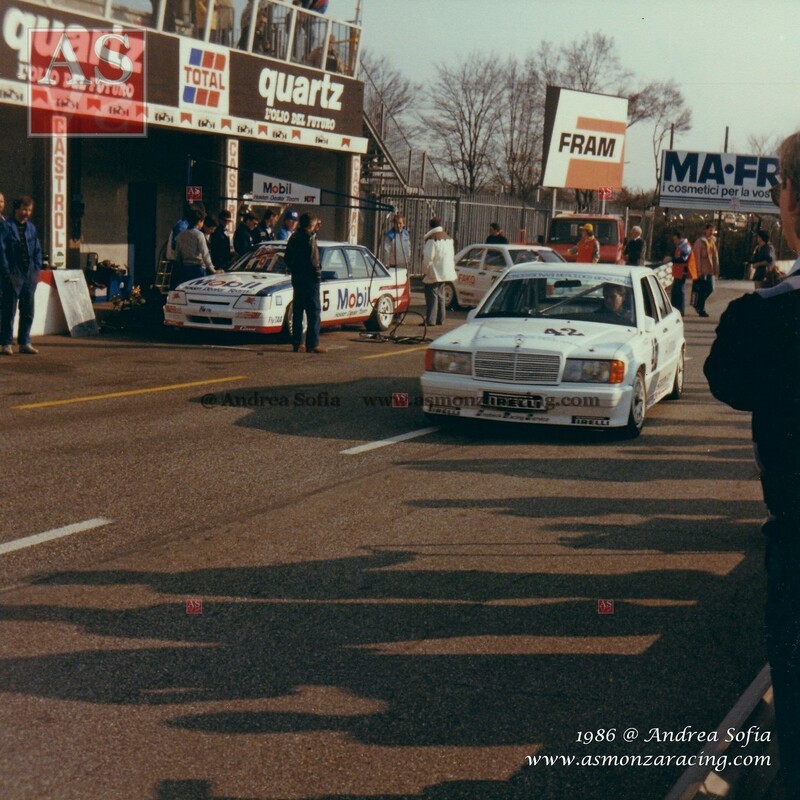 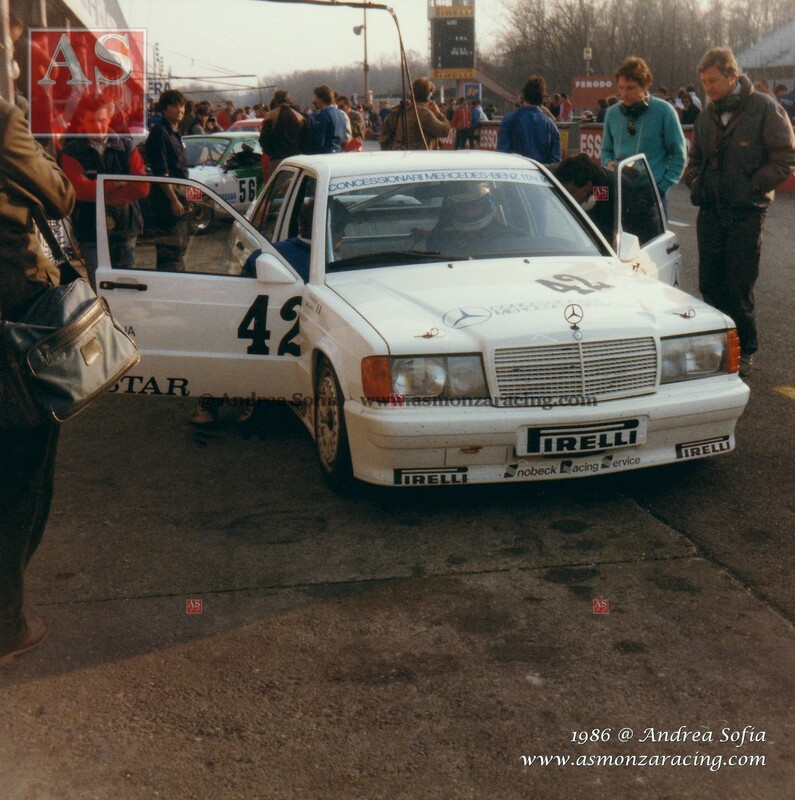 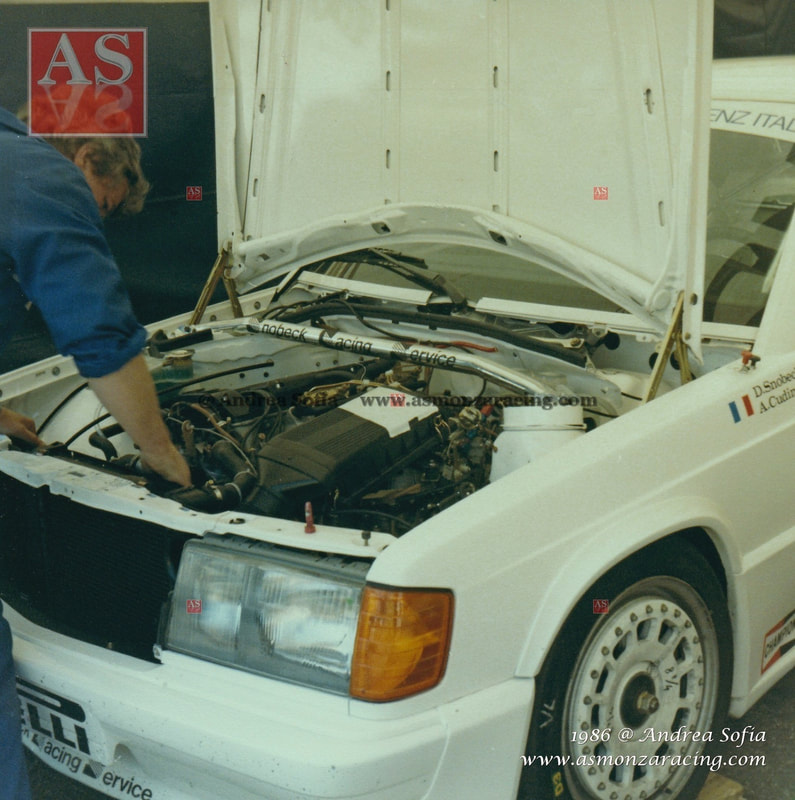 Monza, 500 Km 1986 Mercedes 190 E 2.3-16 #42 Snobeck Racing Team-Mercedes France, Snobeck-Cudini
In the second division, for cars with displacement within 2.5 liters, BMW entered the new 325i which were fast in a straight line and reliable but still lacking in set-up. The car of the German preparator Linder entered for the drivers Markus Oestereich and Winfried Vogt was thirteenth in practice and fourth overall at the finish line, only three laps back to the winner and winning his division. To strongly contrast BMW in the second division the Mercedes took the field with the very fast 190E 2.3 16. Equipped with the powerful and refined 16-valve engine of over 250 hp. The cars were very fast and although they were heavier than the BMWs, their set-up was much better and they were very comfortable in the Monza chicane. In particular, the number 42 of the Dany Snobeck Team, driven by Alain Cudini and Dany Snobeck himself was the fastest in the second division's cars, finishing 12th in practice. In the race after a tough battle he finished fifth overall and second in class behind the Team Linder's BMW 325i.
Toyota Corolla GT AE86 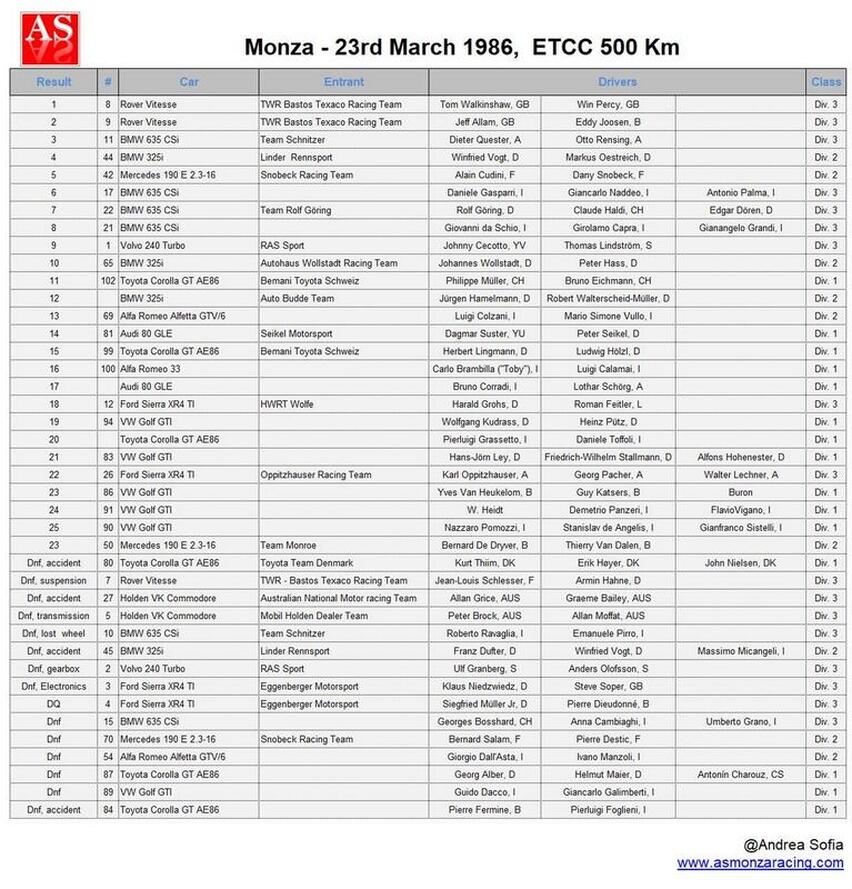