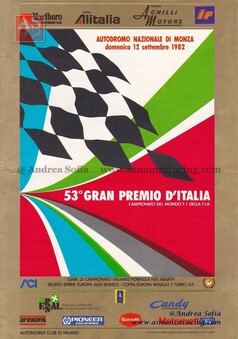 The 1982 represented for Formula 1 the year in which each team felt the absolute necessity of using a turbocharged engine to have a chance of success. Of the 30 cars entered in the Italian Grand Prix, 8 were equipped with turbo engines, Renault, Brabham, Ferrari and Toleman that eventually occupied the first six positions on the starting grid and the first 3 positions on arrival. The supremacy of the turbocharged engines was now evident. The Italian Grand Prix 1982 was the 15th and penultimate round of the World Championship and the standings saw Keke Rosberg leading with a 3 point lead over Didier Pironi injured at Hockenheim. For the Monza race, Ferrari hired Mario Andretti to replace Didier Pironi. Andretti returned to Ferrari in Formula 1 from the distant United States Grand Prix at Watkins Glen in 1972. Patrick Tambay had already replaced the late Gilles Villeneuve. 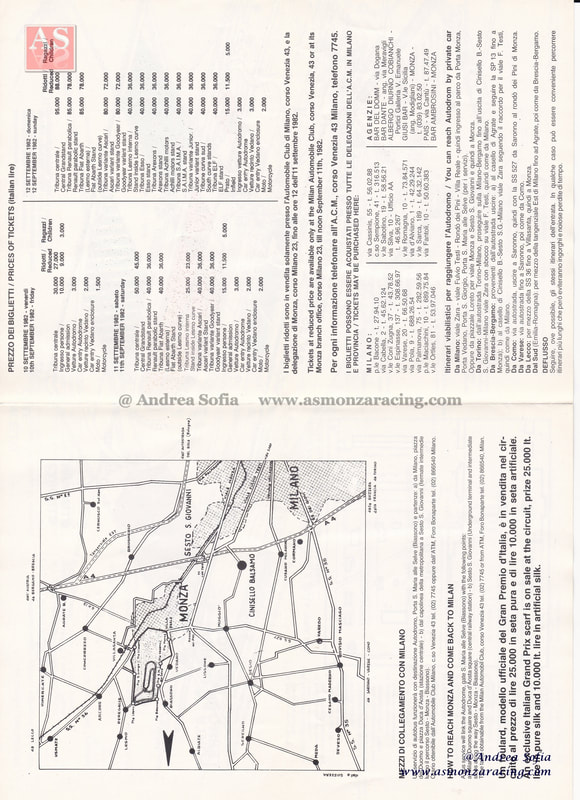 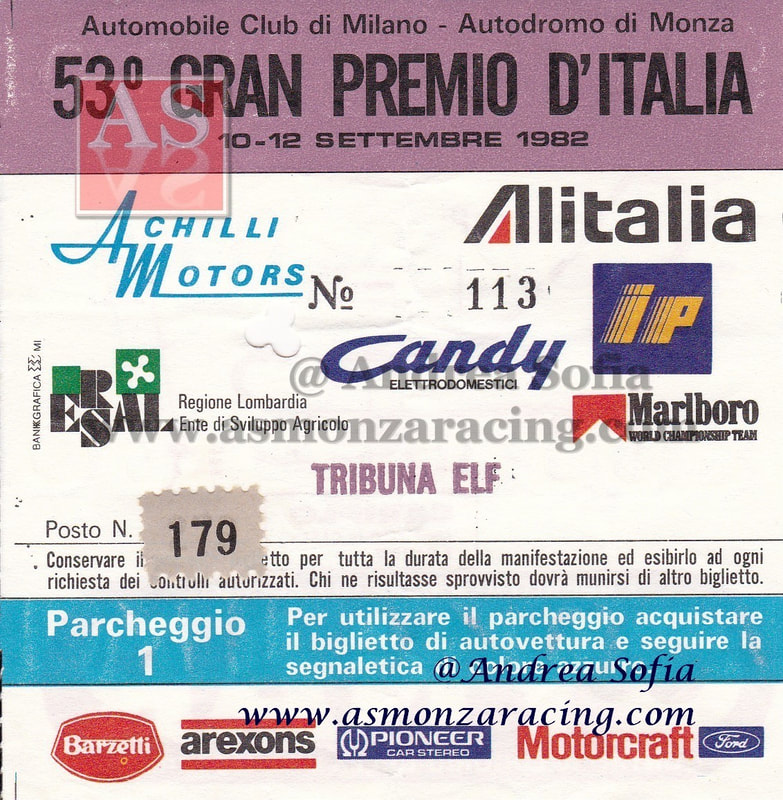 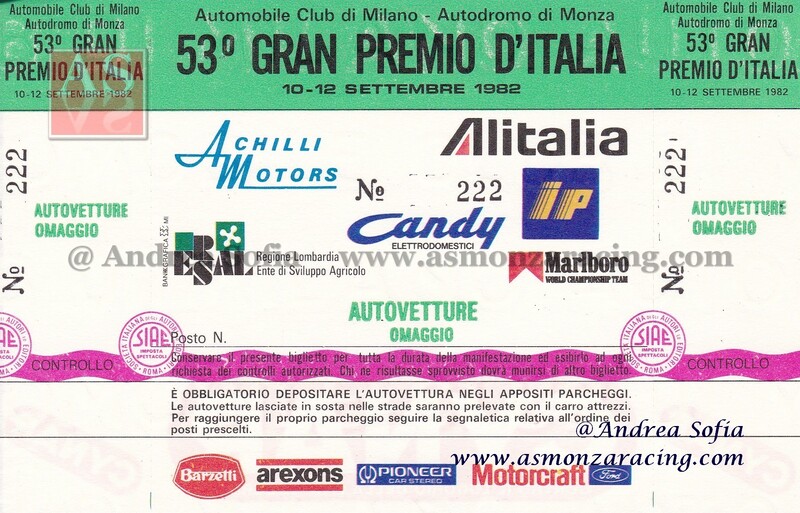 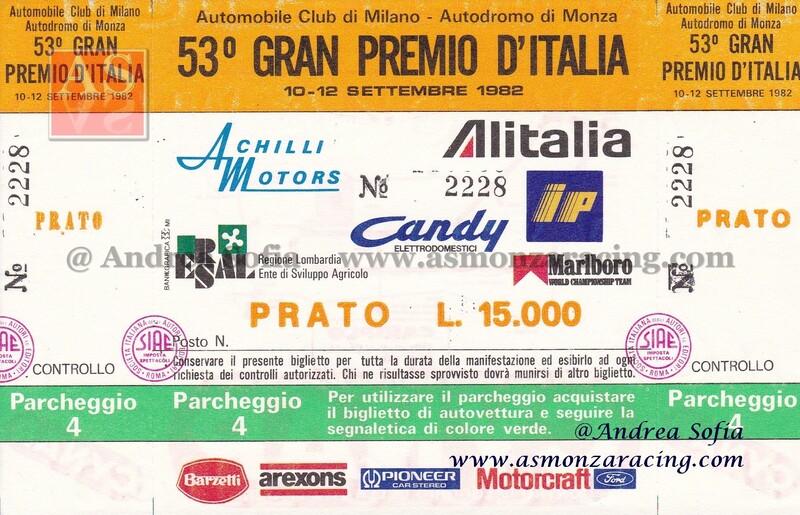 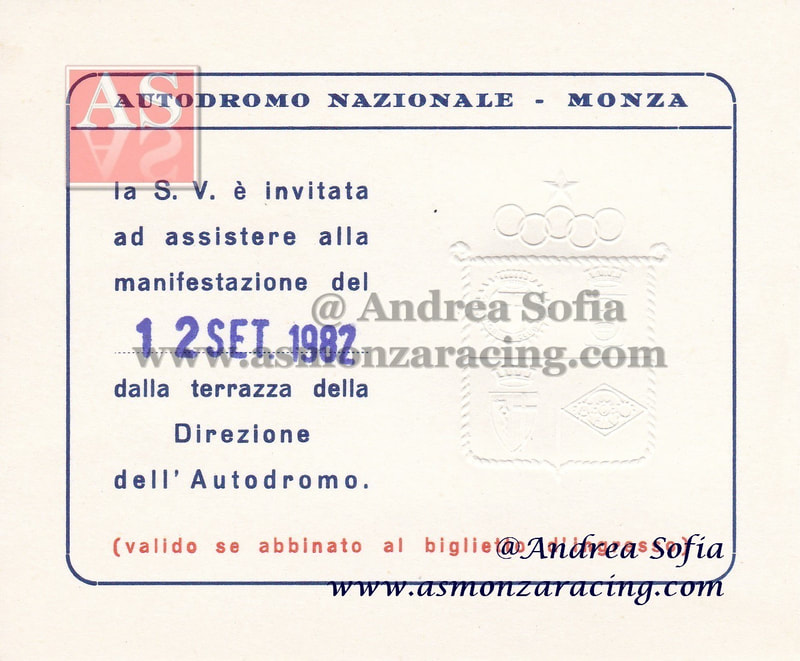 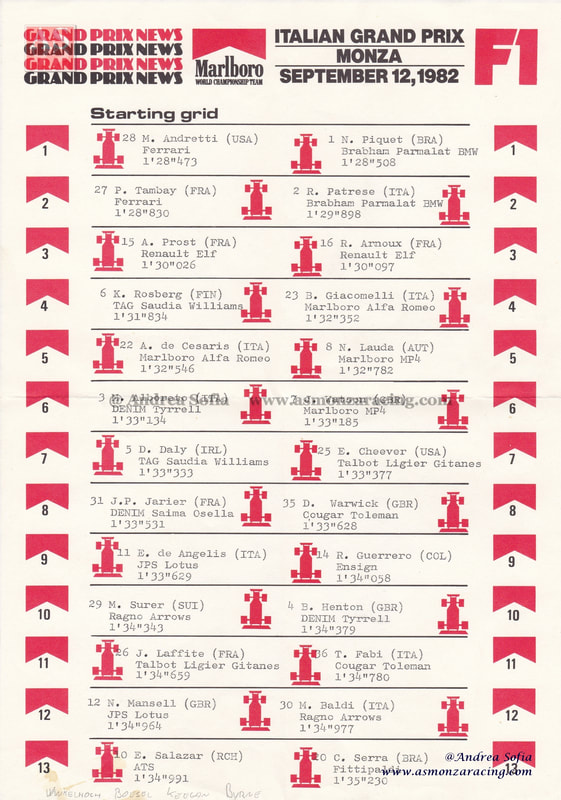 La griglia di partenza del G.P. d'Italia 1982
At the end of the qualifying practice Mario Andretti scored the fastest lap in 1'28"473, thus winning the pole position. At the start Renè Arnoux from the first row alongside Andretti started well and managed to get the lead at half of the first lap and led the race until the end despite a loss of fuel inside the cockpit had soaked his suit. Fourth career victory for Arnoux, just announced as a Ferrari driver for 1983, second place for Patrick Tambay and third for Mario Andretti, plagued from the start by problems with the gas throttle: Present and future of Scuderia Ferrari in just one podium.
Brabham BT50 - BMW 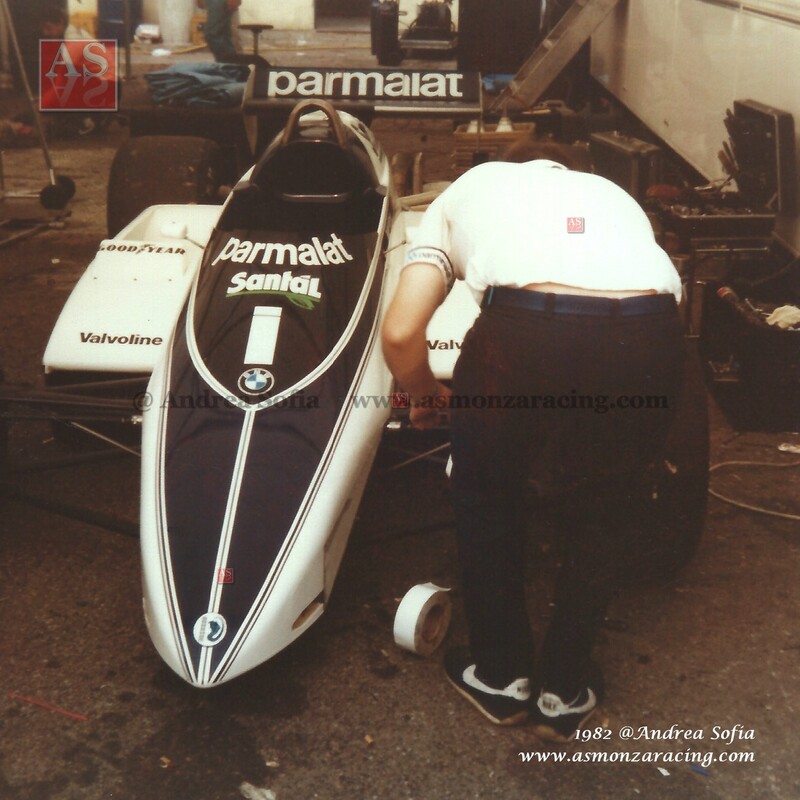 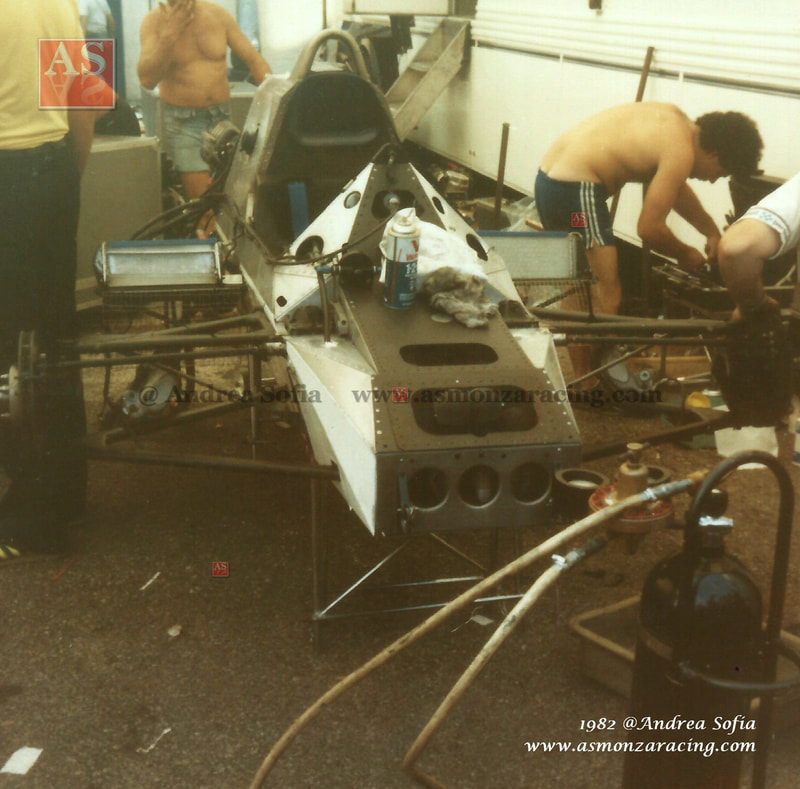 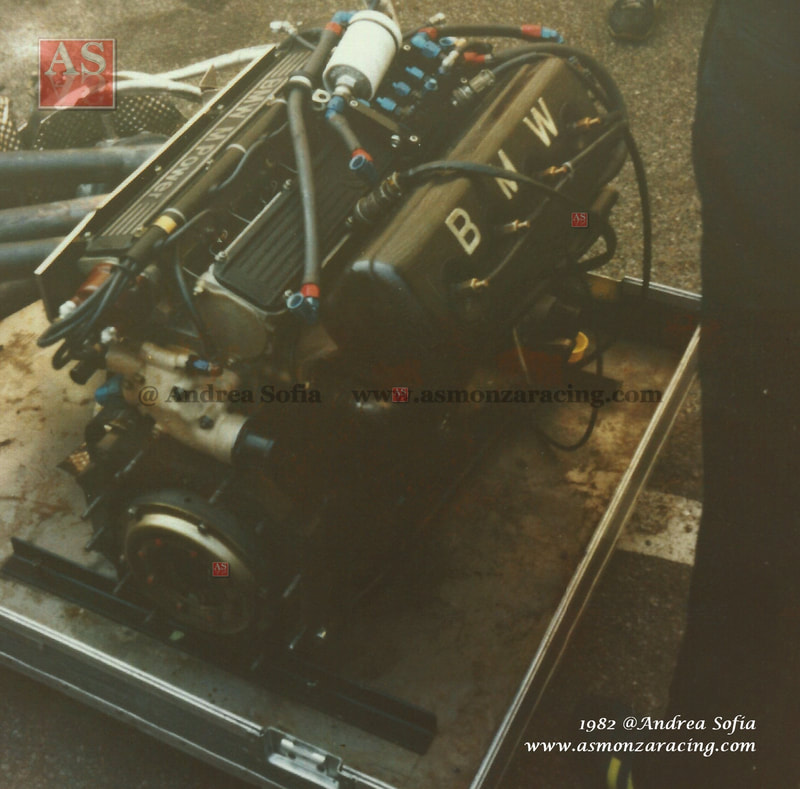 Italian Grand Prix, Monza 1982. Brabham Team
The Brabham BT50 equipped with the 4-cylinder turbo engine BMW brought to Monza were three, the # 5 for Neslon Piquet, the # 4 for Riccardo Patrese and the # 2 as a T-car, equipped with carbon brake discs. Nelson Piquet, the outgoing World Champion, qualified with the second fast time alongside Mario Andretti while Riccardo Patrese qualified fourth. At the start Piquet, forced to driven the T-car due to an engine failure in yours #5 chassis, took the lead but was immediately resumed and already in the middle of the first lap he was fifth. At the eighth lap Piquet stopped in the pits and retired due to problems with the clutch. Same fate for Patrese, also stopped with the broken clutch.
Williams FW08 - Ford Cosworth 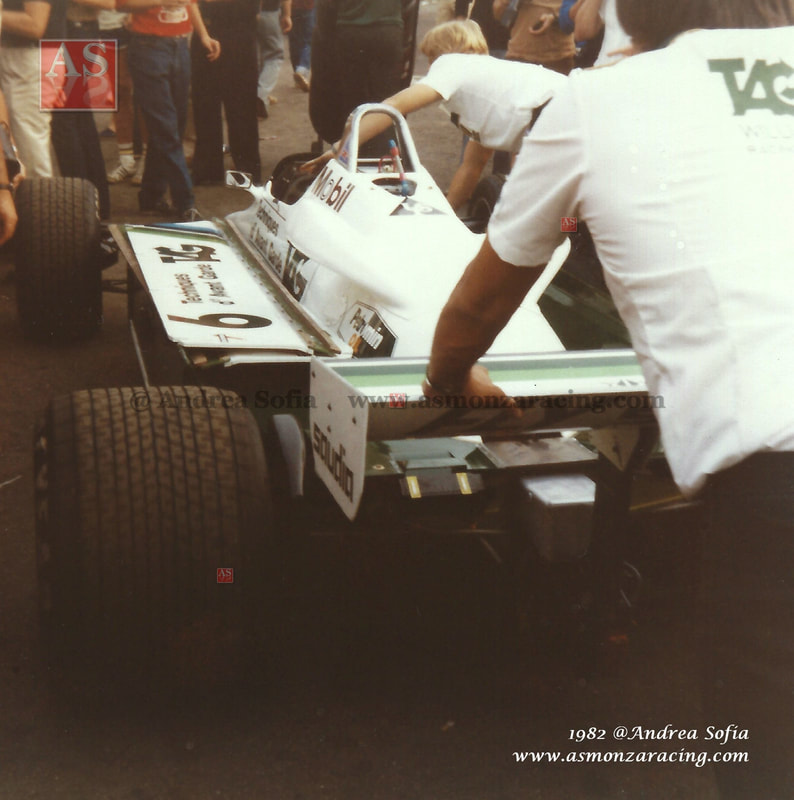 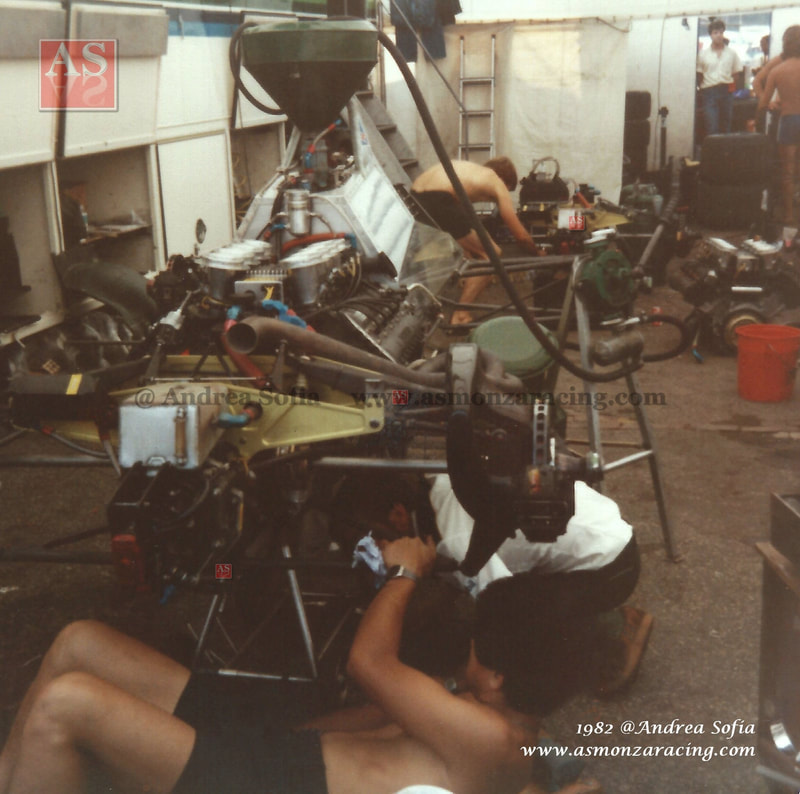 Italian Grand Prix, Monza 1982. Williams Team
Little luck for Williams. Keke Rosberg finished the race in eighth place after being forced to stop at the pits to mount a new rear wing after suffering the break of the support and the loss of the rear wing on the track. Derek Daly, hit by rear by Roberto Guerrero at the first chicane after the start was forced to retire with the broken rear suspension without even having completed a lap. In practice Rosberg obtained the seventh time resulting the fastest among the non-turbo cars while Daly obtained the thirteenth time.
Renault RE30B
McLaren MP4B - Ford Cosworth
Lotus 91 - Ford Cosworth
Talbot Ligier JS19 Matra 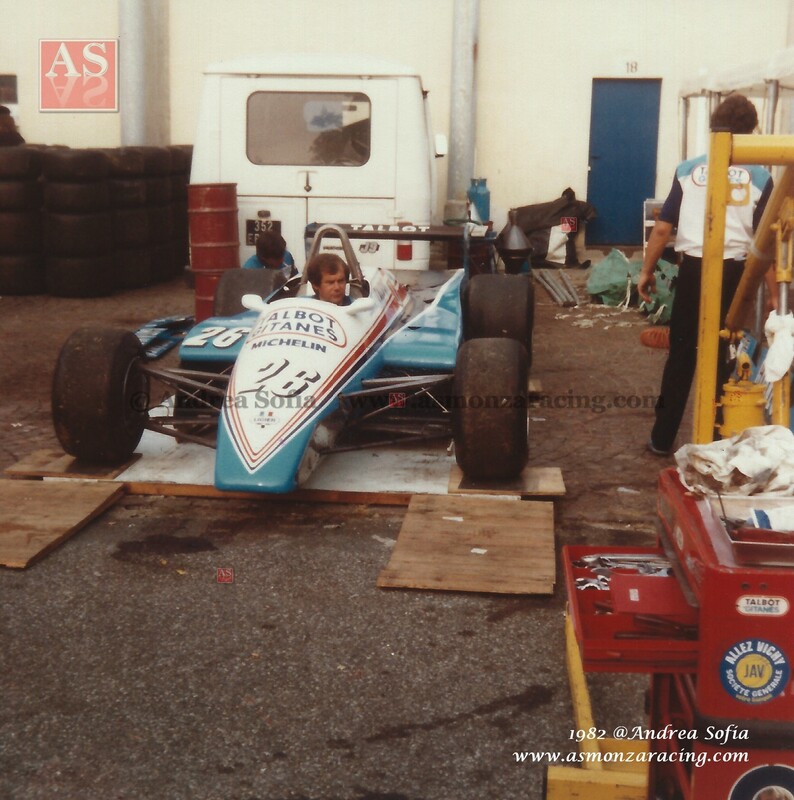 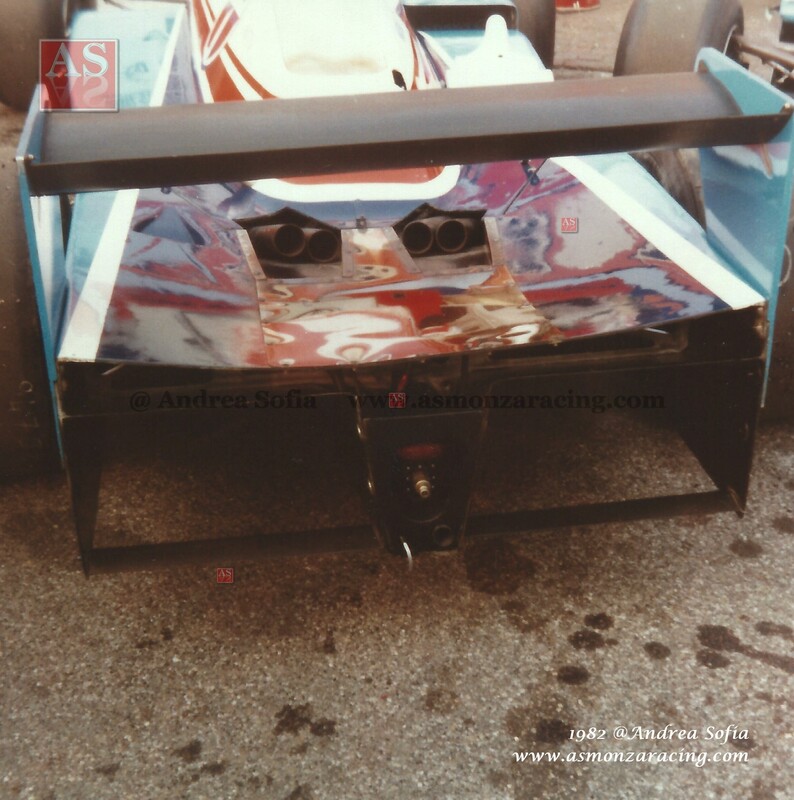 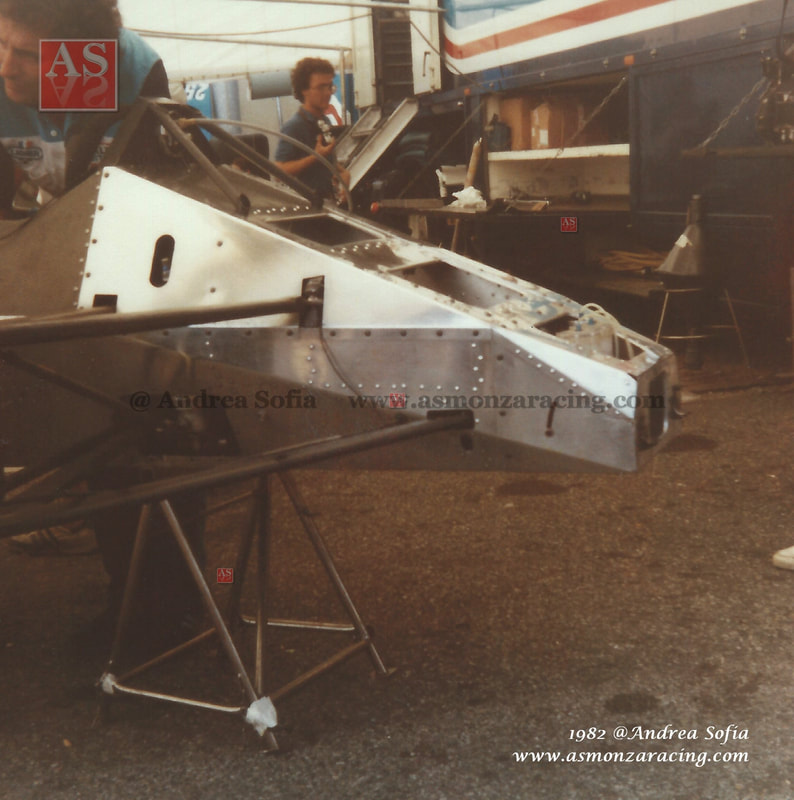 Italian Grand Prix, Monza 1982. Talbot Ligier Team
Jacques Laffite with the number 25 and Eddie Cheever with the number 26 were the drivers of the Talbot Ligier Team in 1982. The JS19, designed by Jean-Pierre Jabouille and Michel Beaujon was a conventional car equipped with the Matra MS81 V12 engine and was never competitive. At Monza Cheever and Laffite qualified in seventh and ninth row respectively. At the finish line only Cheever arrived in sixth position while Laffite broke the gearbox on lap fifth.
Tyrrell 011 - Ford Cosworth 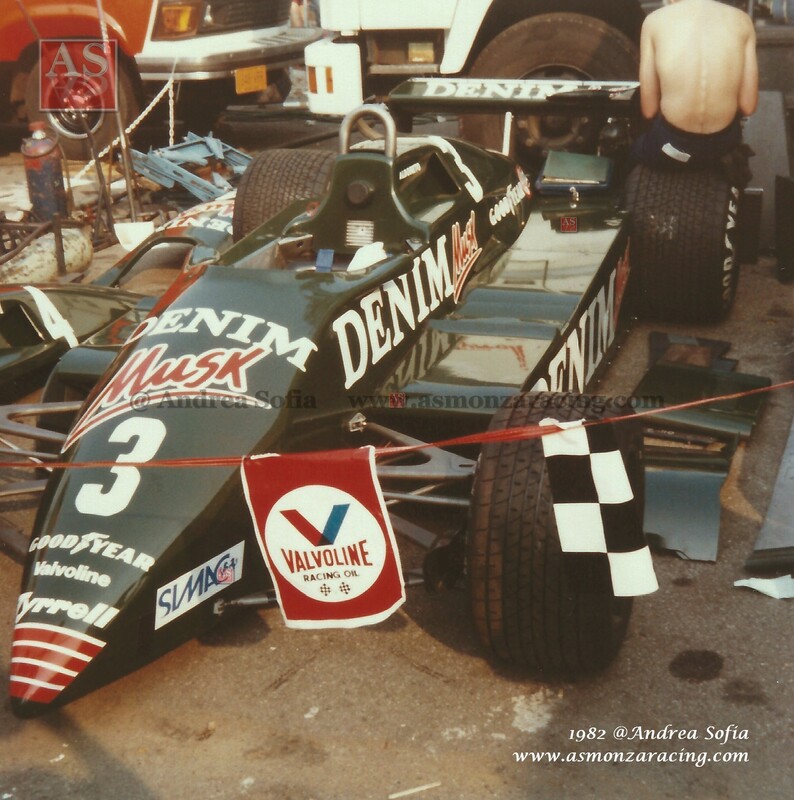 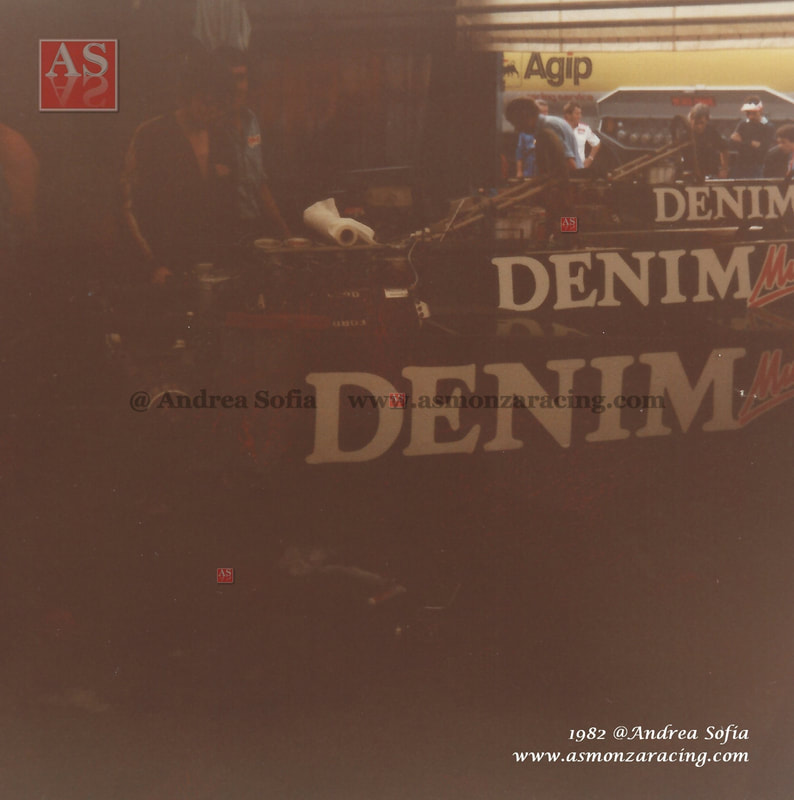 Italian Grand Prix, Monza 1982. Tyrrell Team
The Michele Alboreto and Brian Henton's Tyrrell showed up at Monza with the only novelty represented by the body color that from blue became dark green due to the new sponsor DENIM. The cars were practically the same as the previous Grand Prix and after qualifying in sixth row Michele Alboreto and in the eleventh row Brian Henton, at the end Michele Alboreto had a good race that saw him reach the fifth place while Henton remained involved in a multiple collision that put Derek Daly and Derek Warwich out of the game besides him at the first lap.
The Tyrrell 011 had an aluminum honeycomb panels chassis and was powered by the classic Ford Cosworth DFV. The car was not very competitive, mainly due to the financial difficulties of the team that failed to develop the car. At the last Grand Prix of the season in Las Vegas Michele Alboreto scored a lucky victory managing to contain the comeback of John Watson and the excessive consumption of the tires.
Fittipaldi F9 - Ford Cosworth 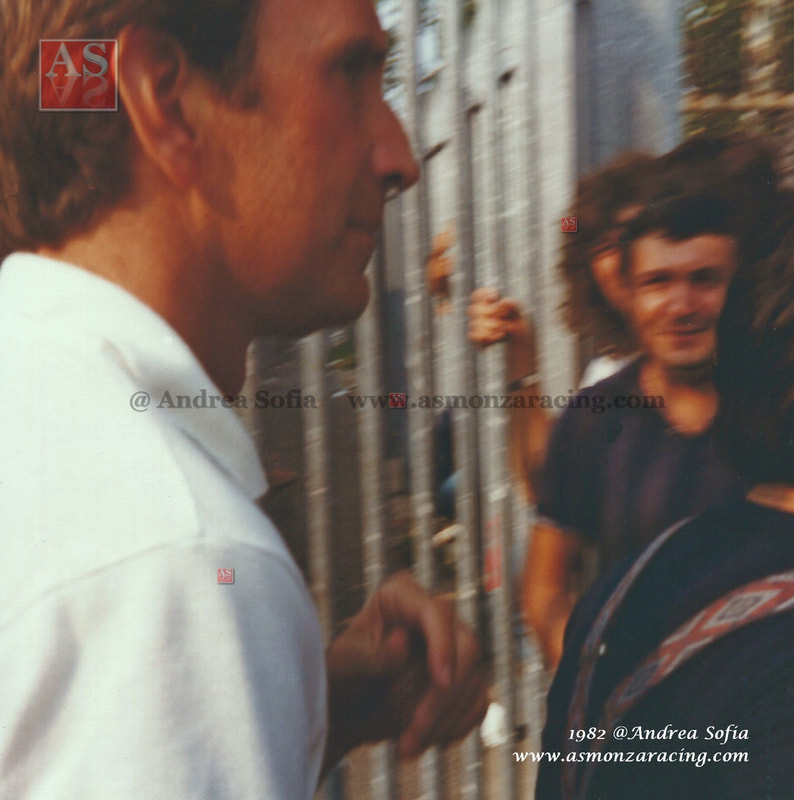 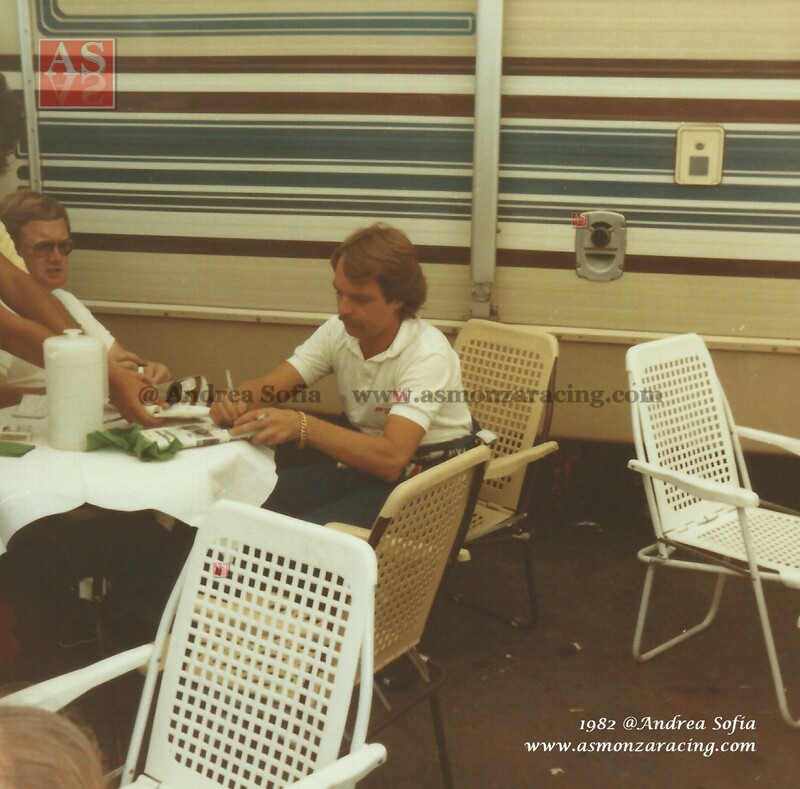 Italian Grand Prix, Monza 1982. Williams Team, Keke Rosberg
The fight for the drivers' title remained a matter between Keke Rosberg on Williams and John Watson on McLaren, the only two remaining to contend for the 1982 World Title with the last challenge at the Grand Prix in Las Vegas. For the constructors' title the fight remained confined between Ferrari and McLaren.
Toleman Team 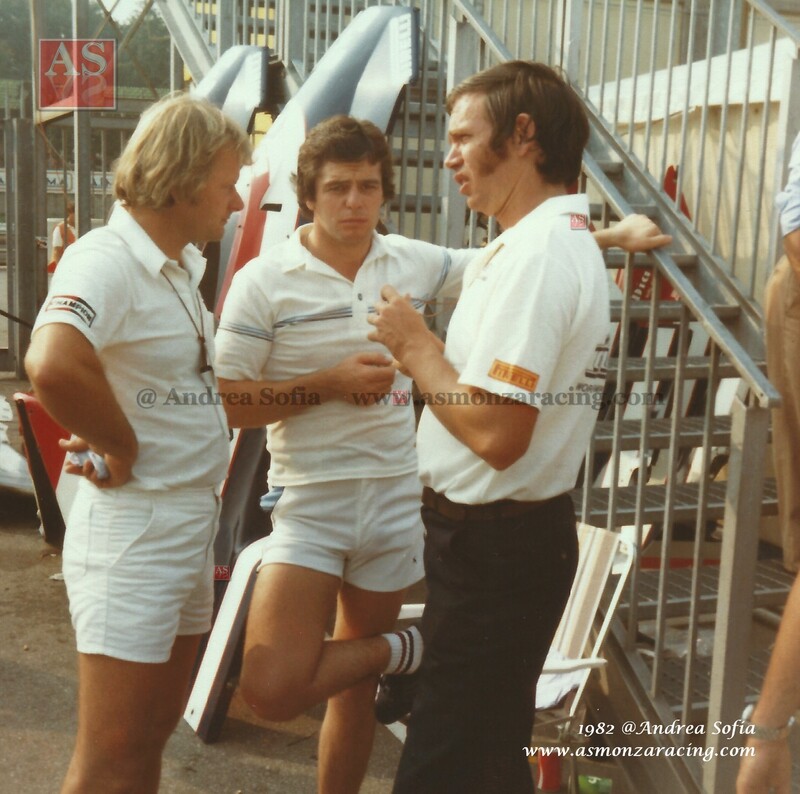 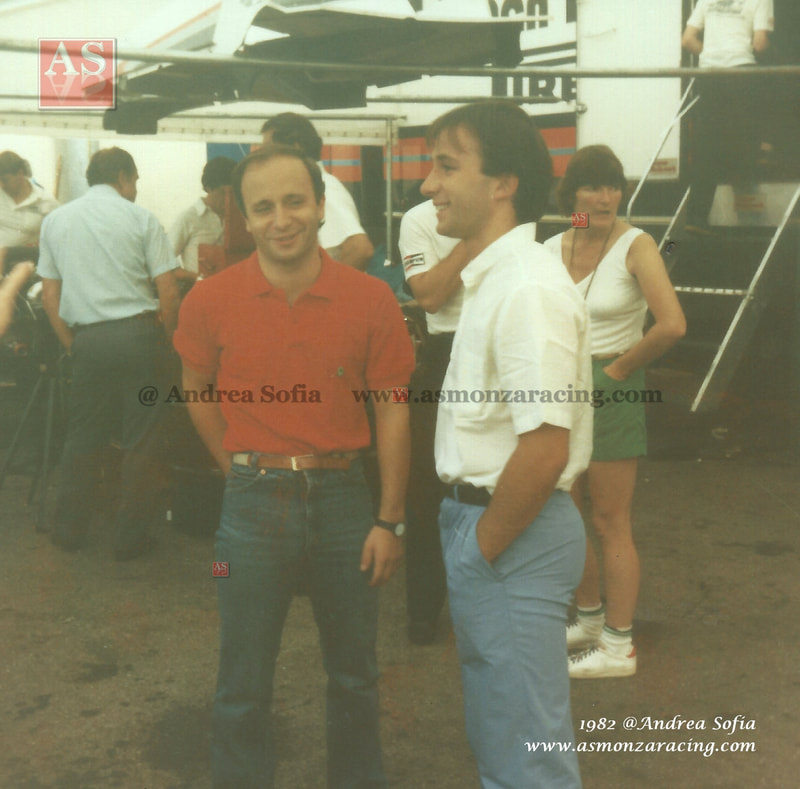 Italian Grand Prix, Monza 1982. Teo Fabi (red) with his brother Corrado (white) fresh Formula 2 European Champion 1982
The Team Toleman drivers were Derek Warwick and Teo Fabi. At Monza Derek Warwick brought the new car to its debut, the TG183 with the chassis entirely in carbon fiber while Teo Fabi used the TG182.
The Toleman were powered by the 4-cylinder turbo designed and built by Brian Hart, still uncompetitive.
Derek Warwick qualified in the eighth row while Teo Fabi in the eleventh. Neither of them completed the race, Warwick was eliminated on the first lap in the multiple collision that also eliminated Henton and Daly while Fabi broke the engine on the second lap. 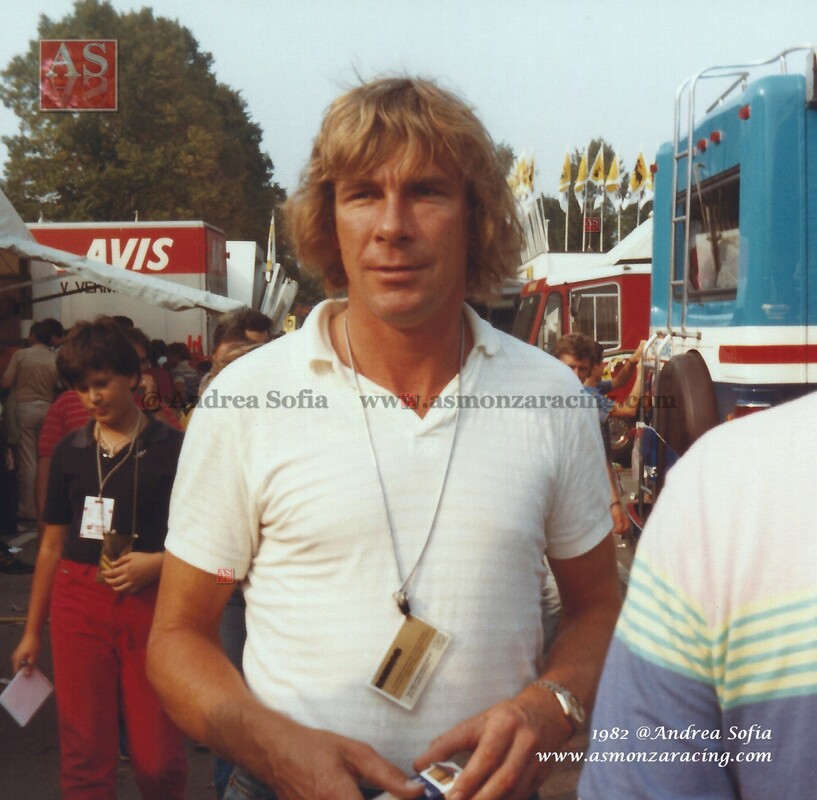 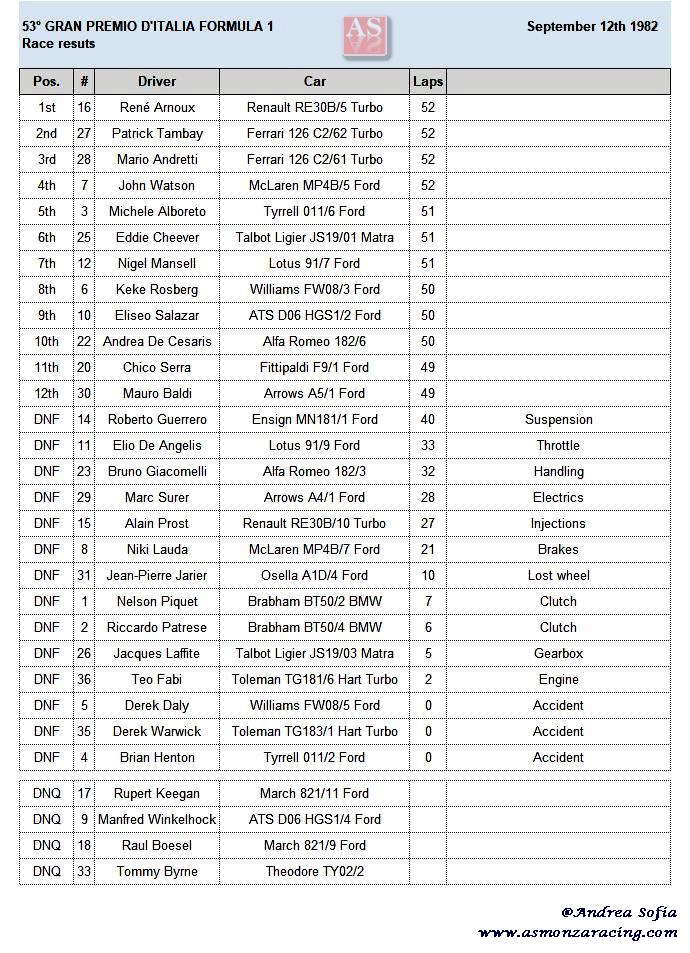