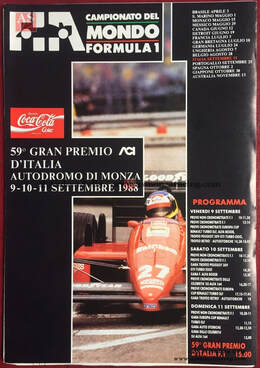 1988 was the last year of turbocharged engines in Formula 1. Since 1989 all cars would have been equipped with naturally aspirated engines. The 1988 Italian Grand Prix, twelfth round of the world championship, took place on 11 September at the Autodromo Nazionale di Monza. The championship was dominated by Ayrton Senna and Alain Prost's McLaren Mp4/4, who came to Monza at the top of the standings with 75 and 72 points respectively, fighting for the championship. The third in the standings, Ferrari driver Gerhard Berger, was at 28 points. In the constructors' classification, the McLaren team was in the lead with 147 points, with the title already mathematically won. The Ferrari team was second at 44 points. Also in Monza, the McLaren MP4/4 powered Honda turbos were the fastest of all. Senna took pole position, Prost was second. Berger and Alboreto were third and fourth, followed by the two Megatron turbo powered Arrows, driven by Eddie Cheever and Derek Warwick. First among the naturally aspirated engines was the Belgian Thierry Boutsen, behind the wheel of the Benetton B188, powered by Ford Cosworth DFR, who qualified with the eighth time. 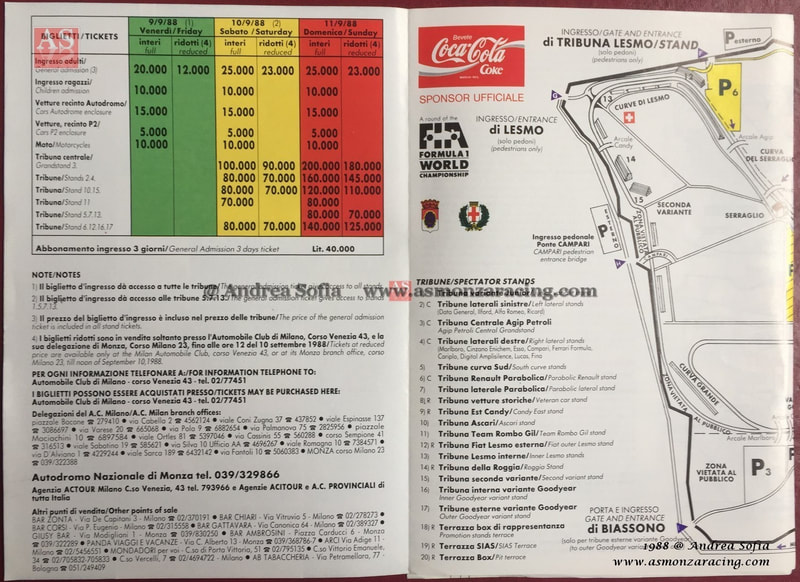 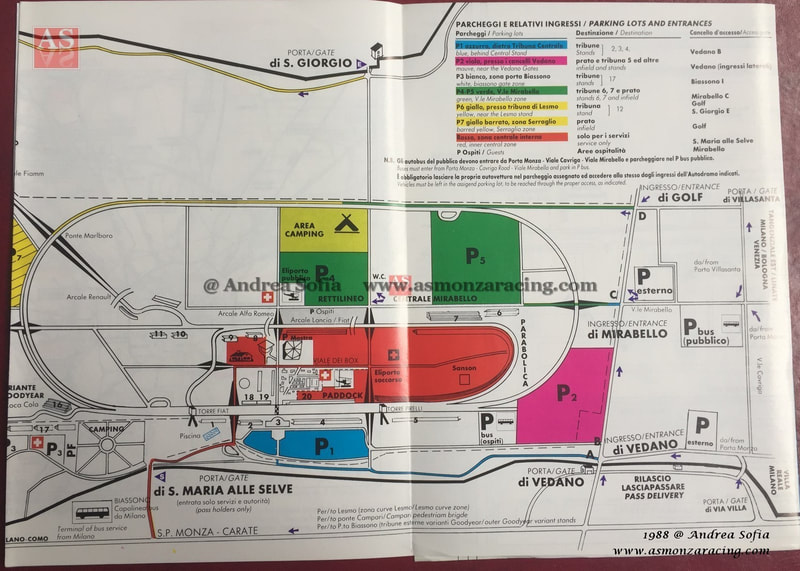 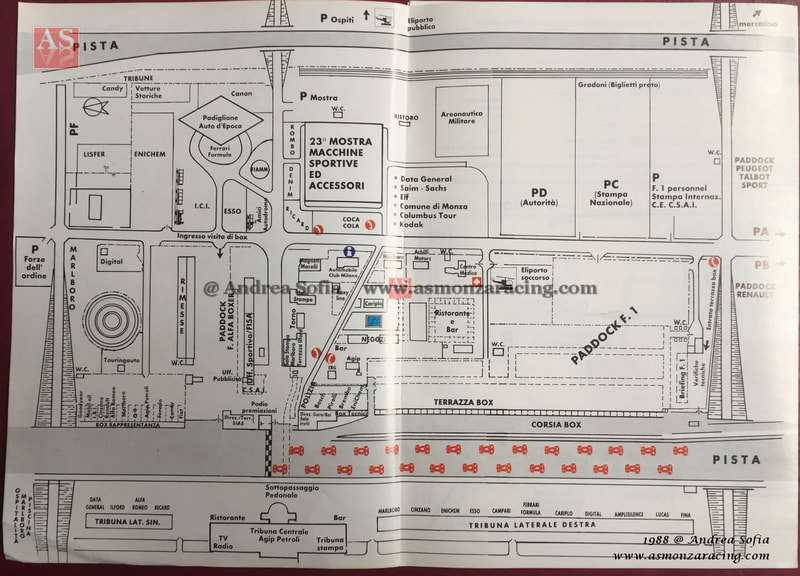 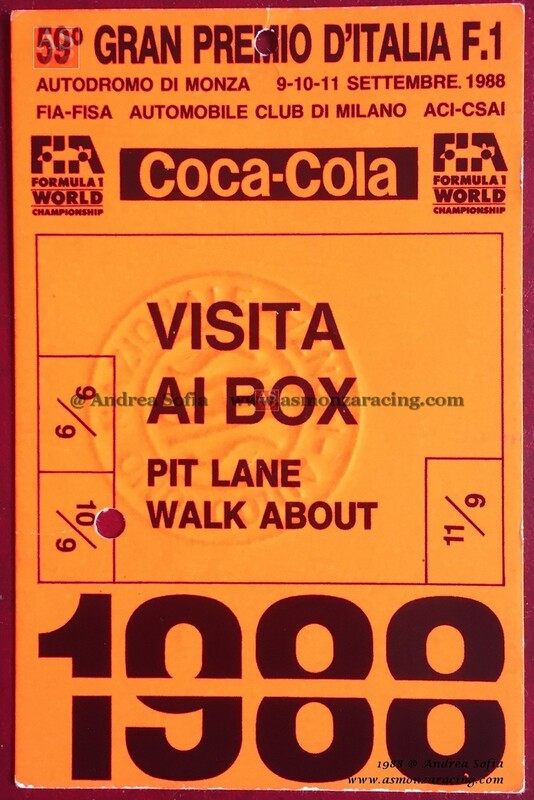 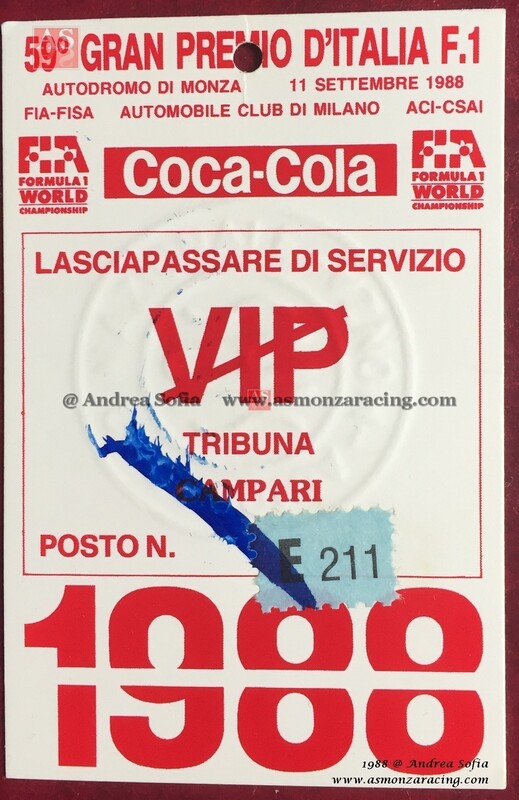 At the start Senna took the lead braked last at the first chicane, followed by teammate Alain Prost, who had had the best acceleration, the two Ferrari of Berger and Alboreto and the Arrows of Eddie Cheever. The Belgian Thierry Boutsen, first among the non-turbo engines, moved to sixth place. Aside from the comeback of Derek Warwick, who started badly and the fight in the center of the group between Patrese, Capelli, and Piquet, the race also seemed too quiet. Prost thought about waking up the audience, when on lap 31 he slowed down with engine problems. On lap 36 Berger moved to second place and Prost returned to the pits and retired. At lap 49 Senna, was preparing to double the Frenchman Jean-Louis Schlesser at the first chicane. The two drivers did not understand each other, the French delayed the braking, the Brazilian came along and the two cars came into contact. End of the race for Senna who gave the victory to Berger, as the previous year he gave it to Piquet.
Ferrari F1-87/88C
McLaren MP4/4 – Honda 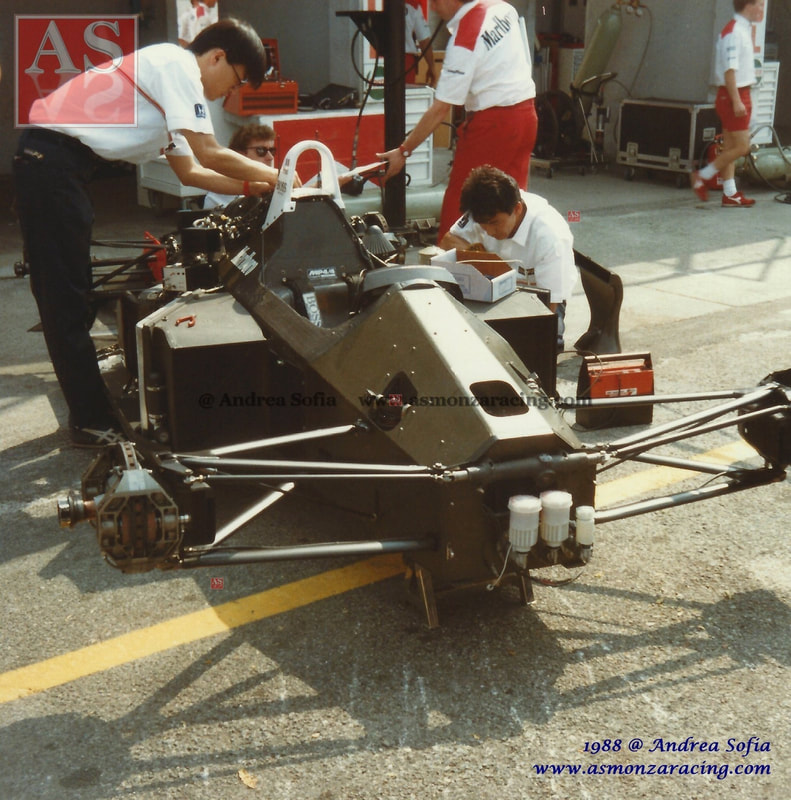 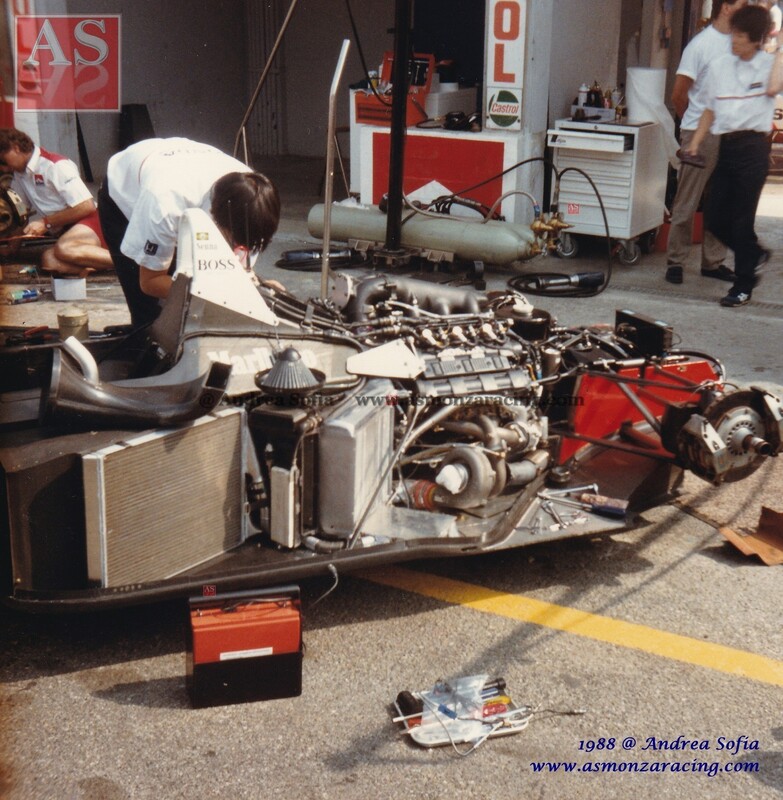 Italian Grand Prix, Monza 1988, McLaren MP4/4 Honda - Ayrton Senna
Tenth pole position of the season for the Brazilian driver. Monza will remain the only Grand Prix not won by McLaren in 1988. Two laps from the end Senna who was leading the race with three second lead over Berger, ended up spinning at the first chicane, due to a misunderstanding during the dubbing by Jean-Louis Schlesser, thus giving Ferrari the victory. Alain Prost was unable to keep up with his Brazilian teammate all weekend. His race lasted until lap 31 when he suddenly slowed down due to engine problems that brought him to the pits for the final withdrawal on lap 36. The McLaren Mp4/4, equipped with the Honda RA168-E turbo engine, allowed Ayrton Senna to win his first world championship.
March 881 - Judd 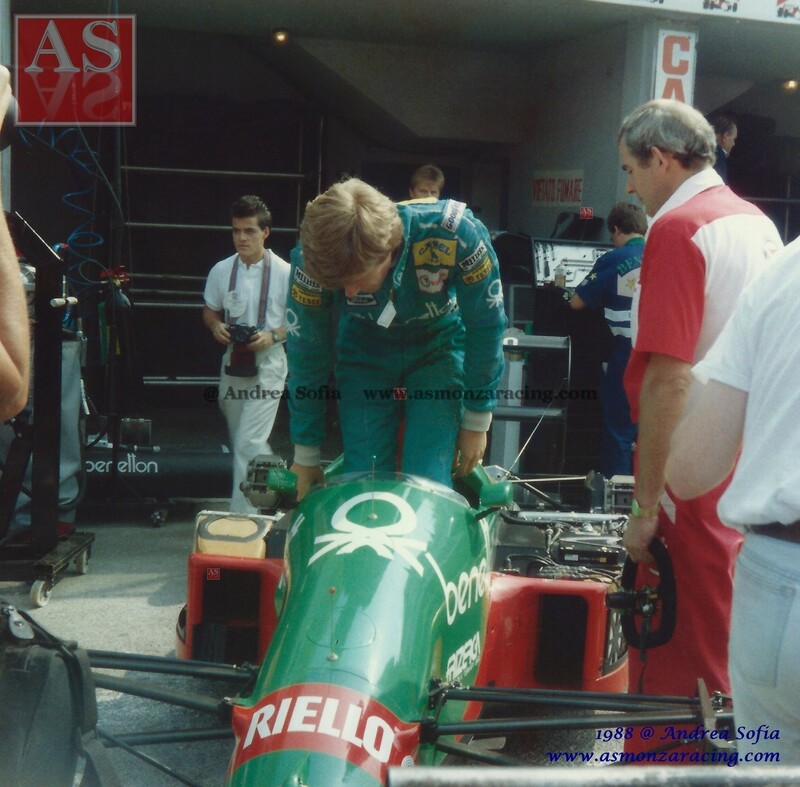 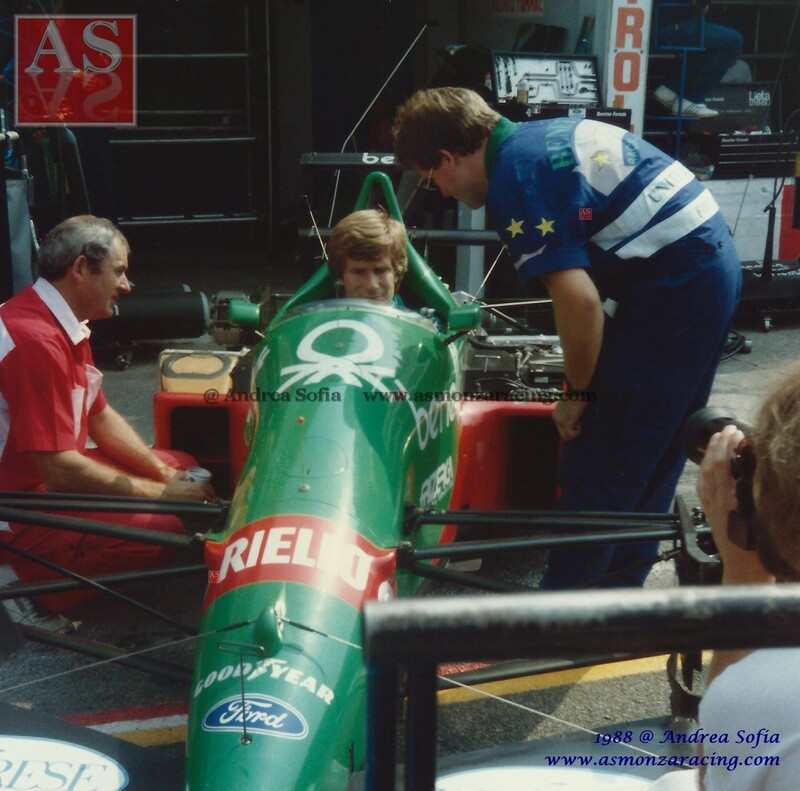 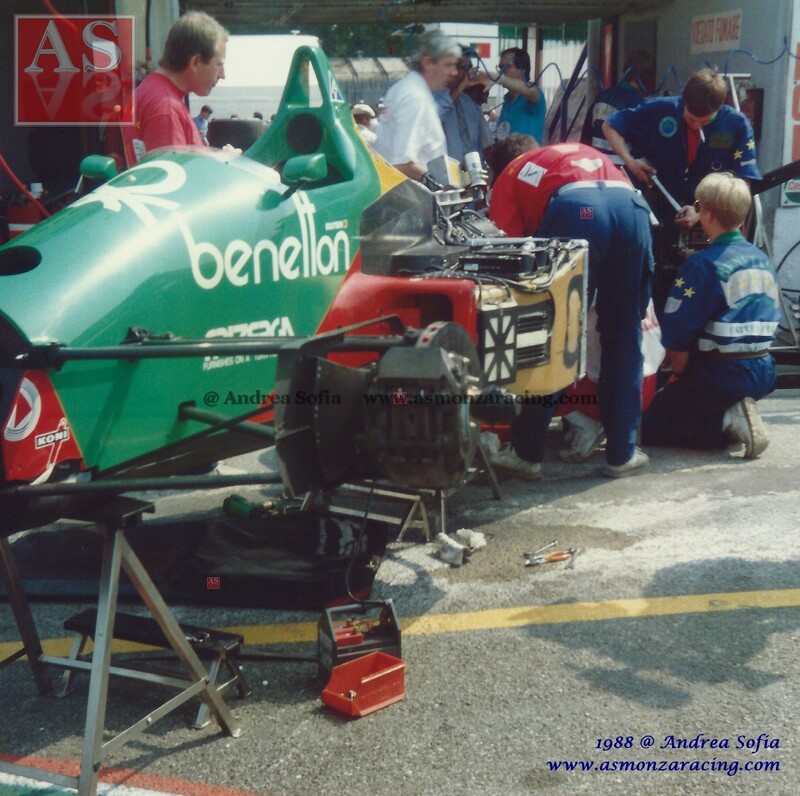 Italian Grand Prix, Monza 1988, Benetton B188 Ford DFR
The Benetton B188, designed by Rory Byrne was exclusively equipped with the 3.5-liter Ford Cosworth DFR. At Monza Thierry Boutsen was eighth in practice, being the fastest among the non-turbo engines and his teammate, the Italian Alessandro Nannini ninth. In the race, the Belgian finished sixth and the Italian finished ninth.
Lotus 100T - Honda
Williams FW12 – Judd
Lola LC88 - Ford DFZ 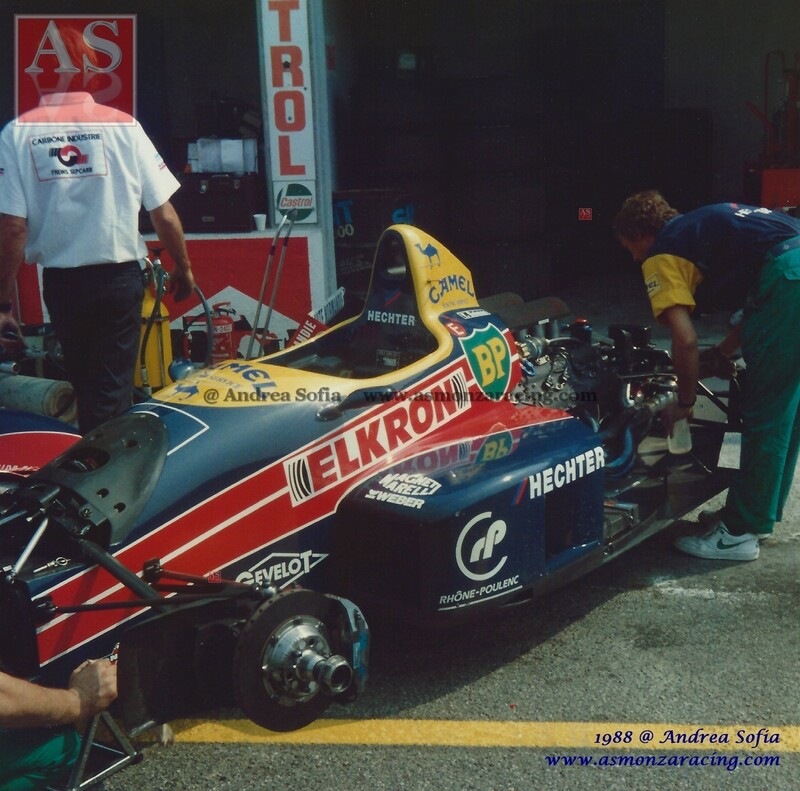 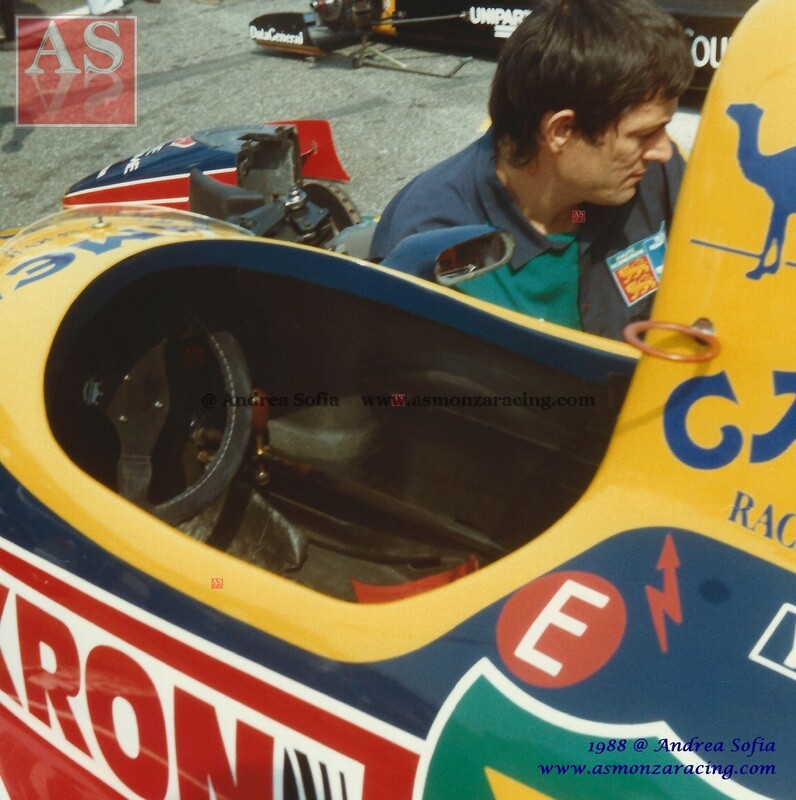 Italian Grand Prix, Monza 1988, Lola LC88 Ford DFZ - Yannik Dalmas
The team drivers, the French Philippe Alliot and Yannik Dalmas, at Monza had to struggle with a single-seater that was not at all suitable for fast tracks and despite the fact that Alliot had used in practice an experimental engine prepared by Heini Mader, credited with 15 HP more than the standard version, always prepared by Mader, did not go beyond the twentieth position on the starting grid.
Ligier JS31 - Judd
Tyrrell 017 - Ford DFZ 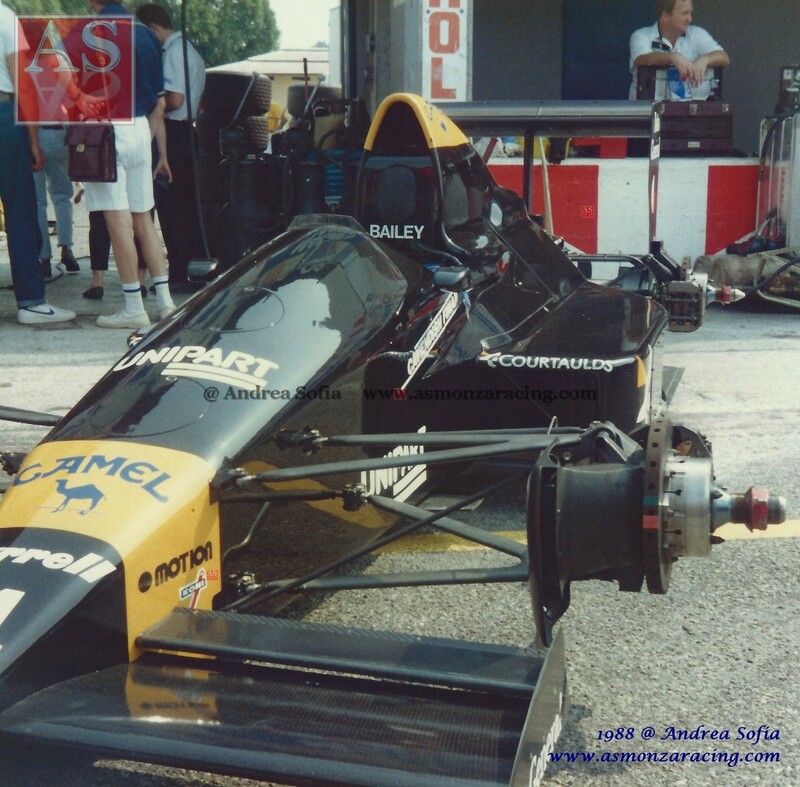 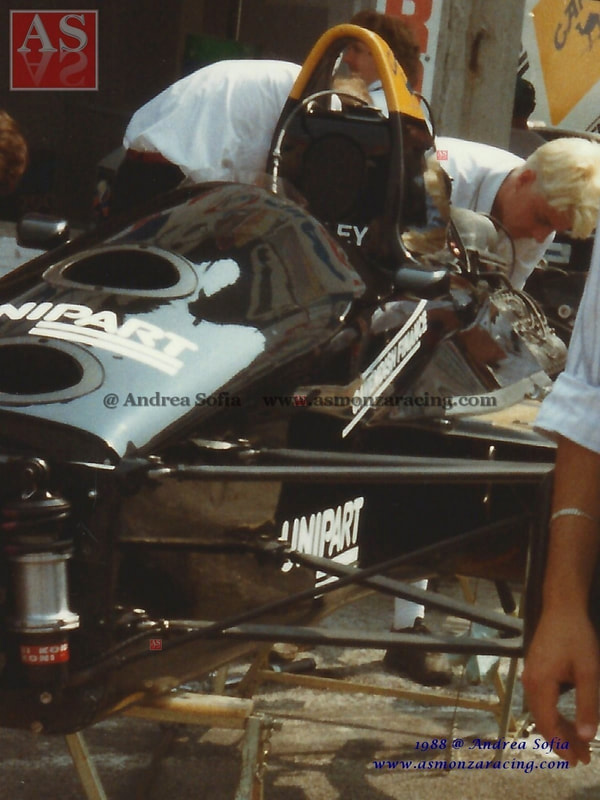 Italian Grand Prix, Monza 1988, Tyrrell 017 Ford DFZ - Julian Bailey
The British Julian Bailey and Jonathan Palmer were two other drivers who, throughout the season, were struggling with an uncompetitive single-seater. The Tyrrell 017, powered by the Ford Cosworth DFZ, was designed by Maurice Philippe. In Monza Jonathan Palmer did not qualify while Julian Bailey snatched the last position on the grid and finished twelfth in the race. 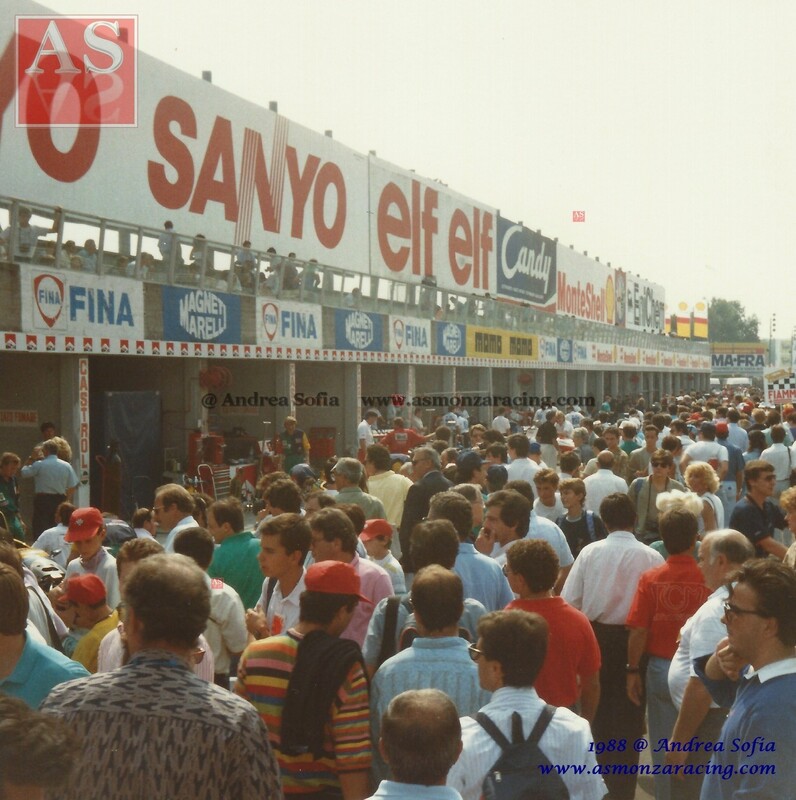 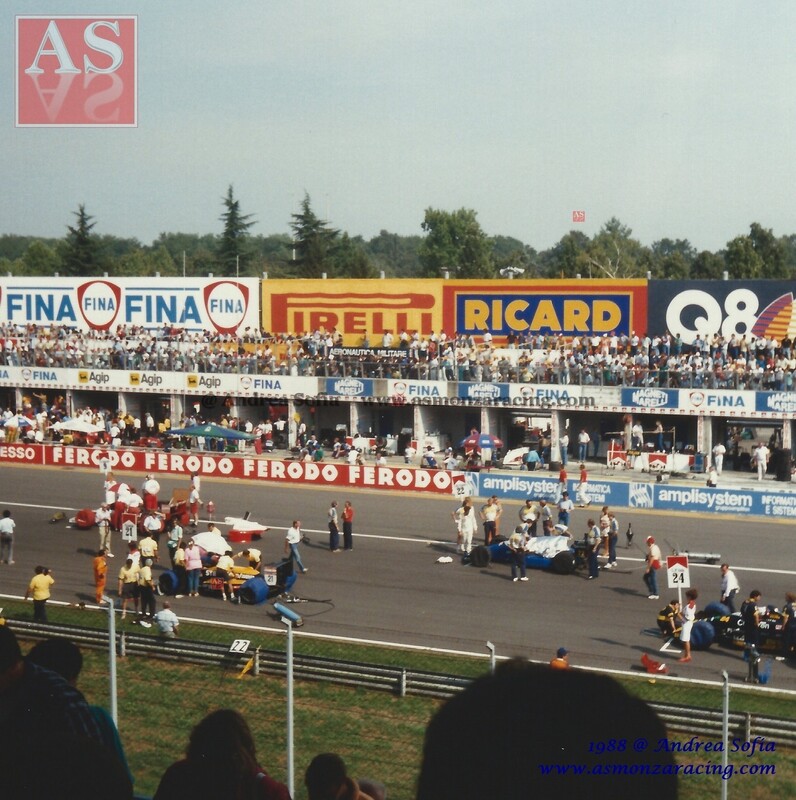 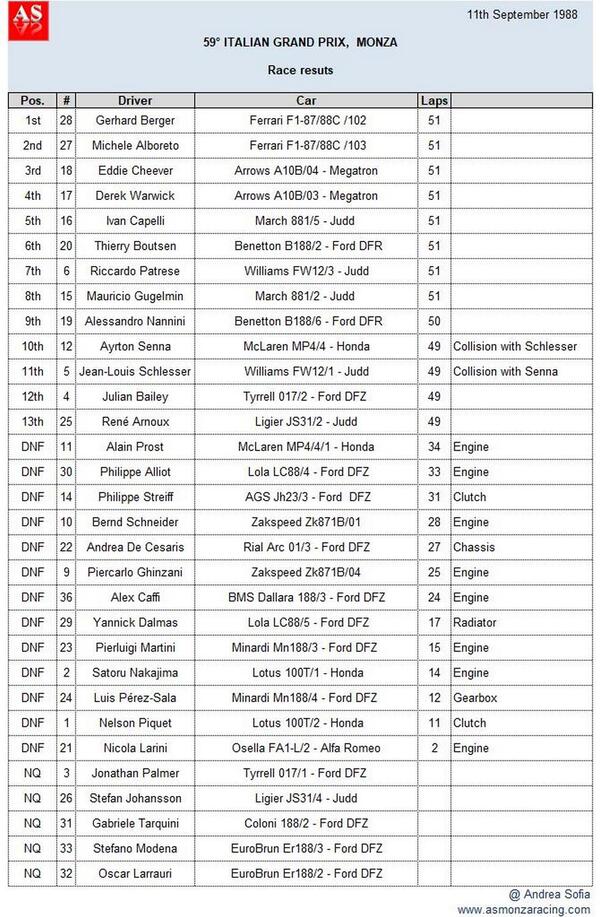