The 1000 km of Monza in 1988 was the third race of the FIA ​​World Sports-Prototype Championship, after the two races held in Spain, the 800 km of Jerez and the 360 ​​km of Jarama. The championship standings, on the eve of the Monza race saw Sauber-Mercedes in the lead followed by the Jaguar and the Porsche of Team Joest. The field of entered at the 1000 km of "Brianza" was very respectable. In total 14 C1 cars, including two T-Cars, represented by Jaguar, Sauber-Mercedes, Porsche, Cougar and 15 C2 represented by 6 different manufacturers, Spice with 5 specimens, Argo with three specimens, Tiga and ALD with two and Gebhardt, Rondeau and Olmas with a car each one. For the large C1 cars, the rules provided for a minimum weight of 800 kg and no more than 510 litres of fuel available for the 1000 km race, while for the C2 class the minimum weight was 700 kg and the maximum quantity of fuel to be used for 1000 km fixed at 363 litres, 10% more than the previous year.
After the Monza's race,  particularly spectacular and fought with continuous changes in front, despite the rules regarding fuel consumption, the Silk Cut Team Jaguar came out victorious for the second time in three races and found itself at the top of the championship in front of the Sauber-Mercedes. 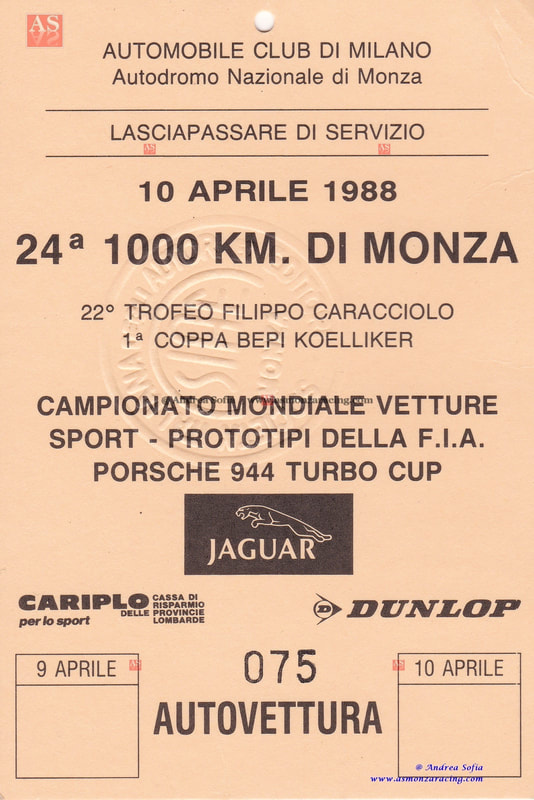 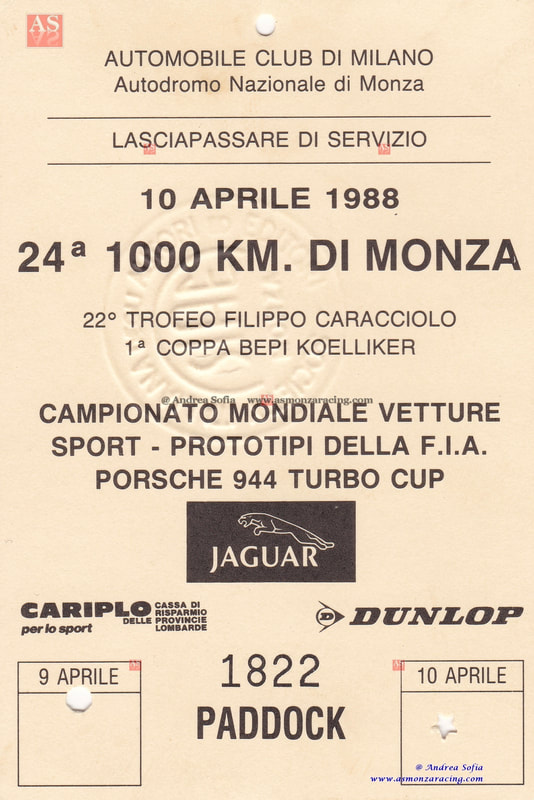 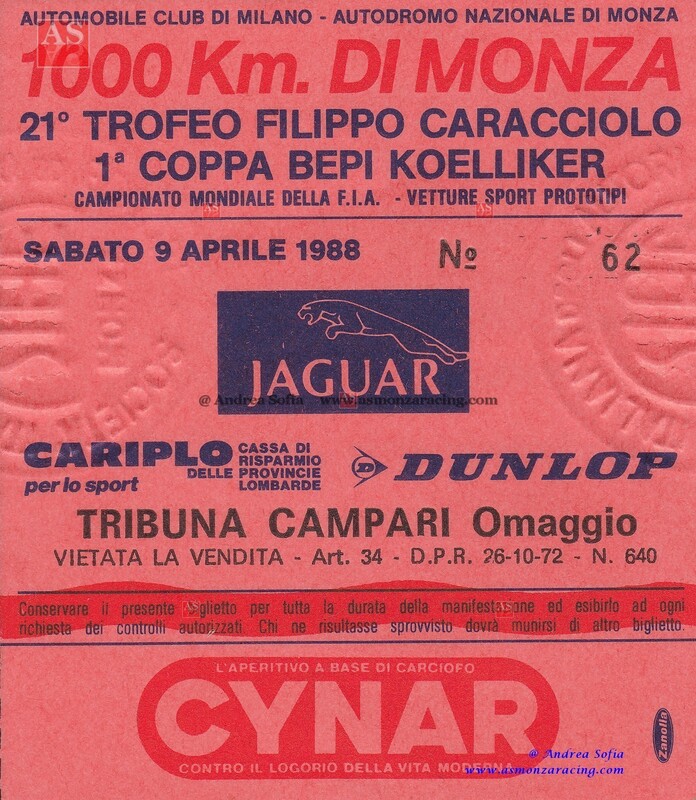 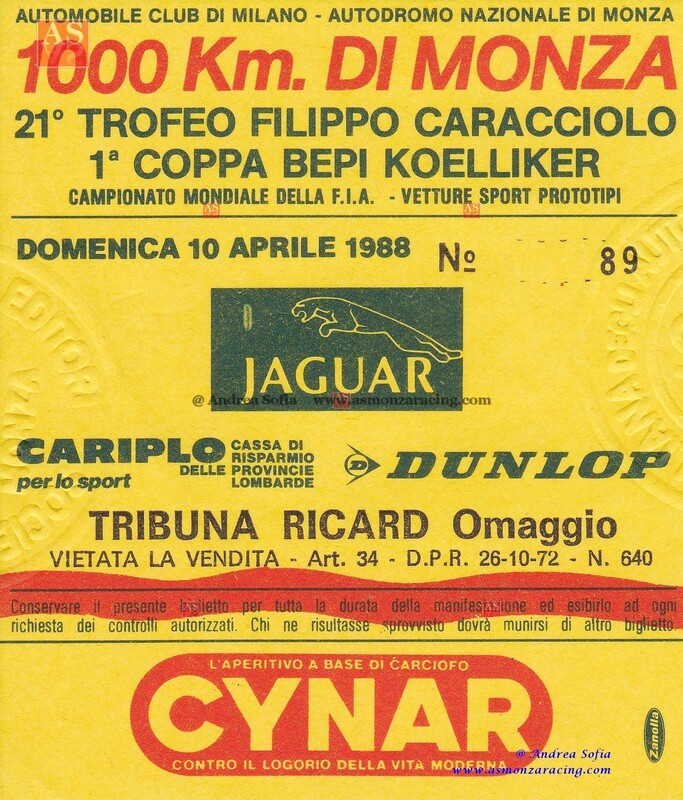 Monza 1000 km, 1988. Pass and tickets
TWR Jaguar XJR-9
Tom Walkinshaw's TWR Team, back from the victory in the second race of the World Championship at Jarama, brought three Jaguars XJR-9 to Monza, the third scheduled race. The cars, built by Tom Walkinshaw Racing in Kidlington, Oxfordshire in collaboration with Jaguar, were the evolution of the previous year's XJR-8 model and were fitted with a monocoque made of carbon fibre and kevlar, and equipped with a 6125 cc V12 engine capable of delivering nearly 760 hp. The crews consisted of Martin Brundle / Eddie Cheever who used the chassis TWR-J12C-588 and Jan Lammers / Johnny Dumfries who were given the chassis TWR-J12C-488. The third car, the chassis TWR-J12C-187 was used only in practices. At the end of the qualifying, the Jaguars were given the same time, 1: 33.62, which earned the two crews Brundle-Cheever and Lammers-Dumfries the fourth and fifth positions respectively on the starting grid. 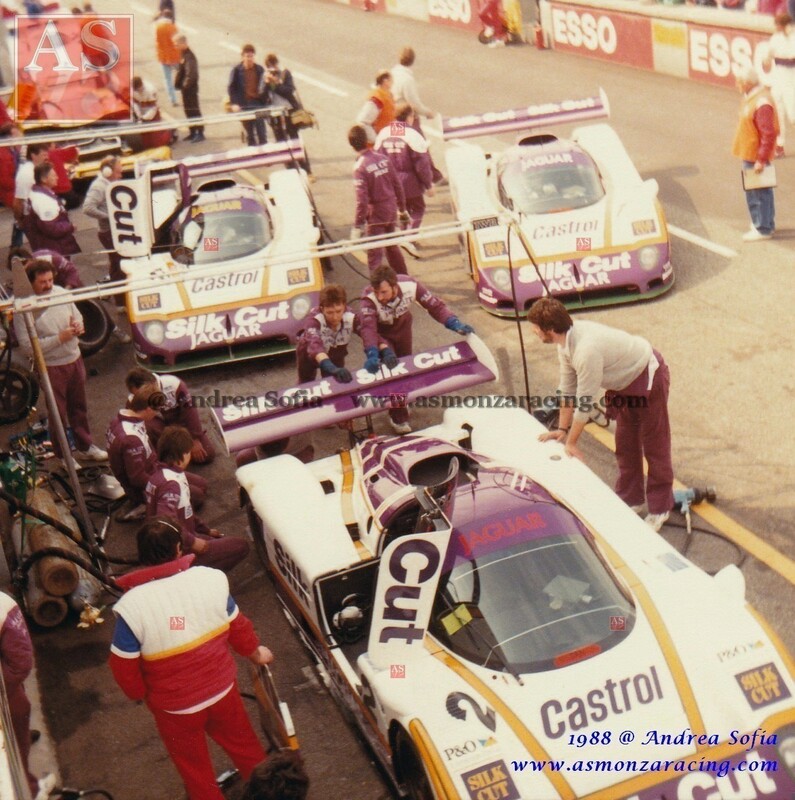 Monza 1000 km, 1988. Silk Cut TWR Jaguar XJR-9
Jaguar XJR-9 chassis #TWR-J12C-588
The Anglo-American crew's race with the car marked by the number 1 was a true masterpiece that took them to the top step of the podium. With an extremely regular race conduct, Martin Brundle and Eddie Cheever bent the fierce competition of Sauber-Mercedes and Porsche without having problems with fuel consumption. 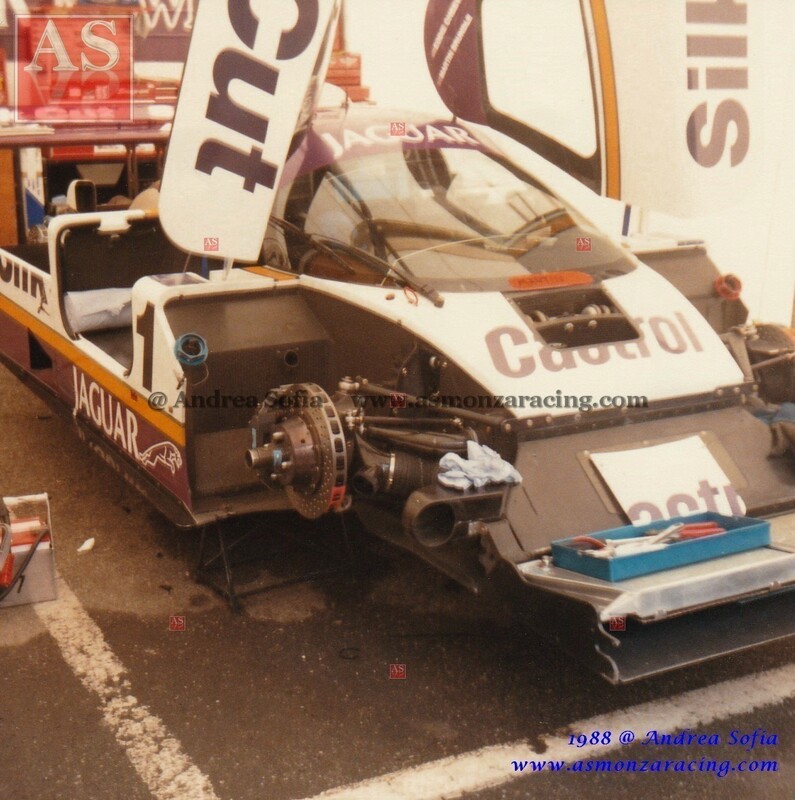 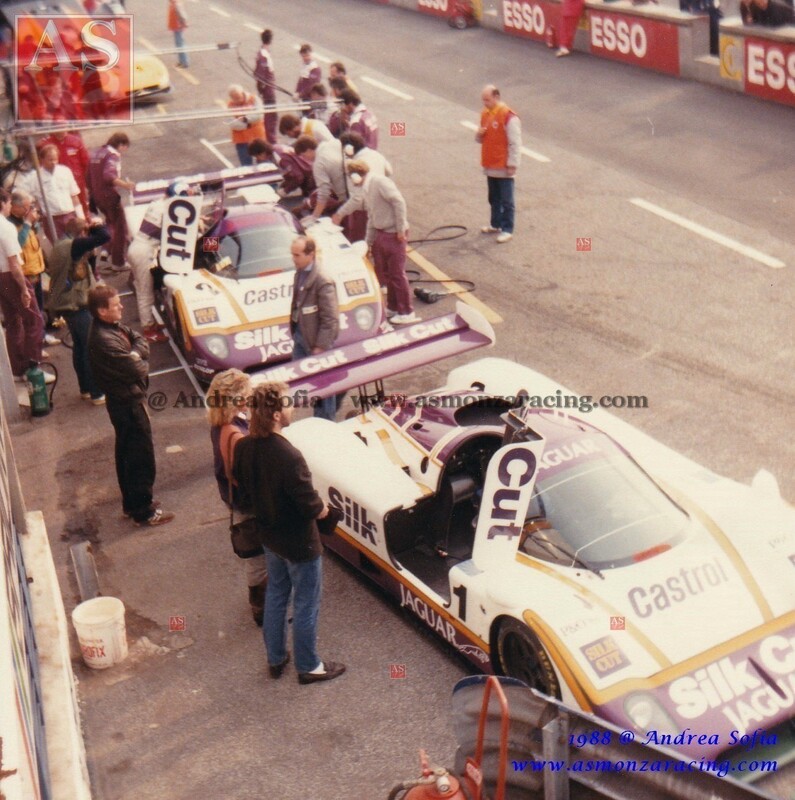 Monza 1000 km, 1988. Silk Cut TWR Jaguar XJR-9 chassis #TWR-J12C-588 Martin Brundle/Eddie Cheever
Jaguar XJR-9 chassis #TWR-J12C-488
At the start of the launch lap, the Lammers-Dumfries engine did not want to fire up and the car was started pushing by mechanics so, at the start of the race it was at the bottom of the grid. On lap 20 Lammers was already fifth but on lap 78, at the Roggia chicane he entered hard on Baldi hitting him on the side-pod. The Dutch driver was forced to stop in the pits losing 5 laps to replace the damaged radiator in the impact. Dumfries started from the pit trying to force the gap only to finish on lap 114 spinning at the Ascari chicane. 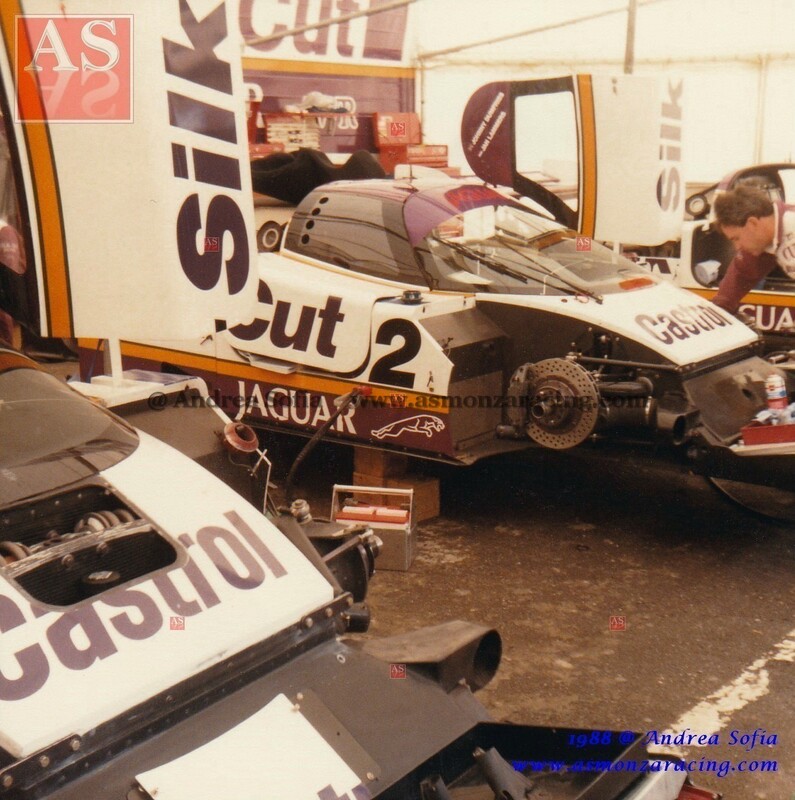 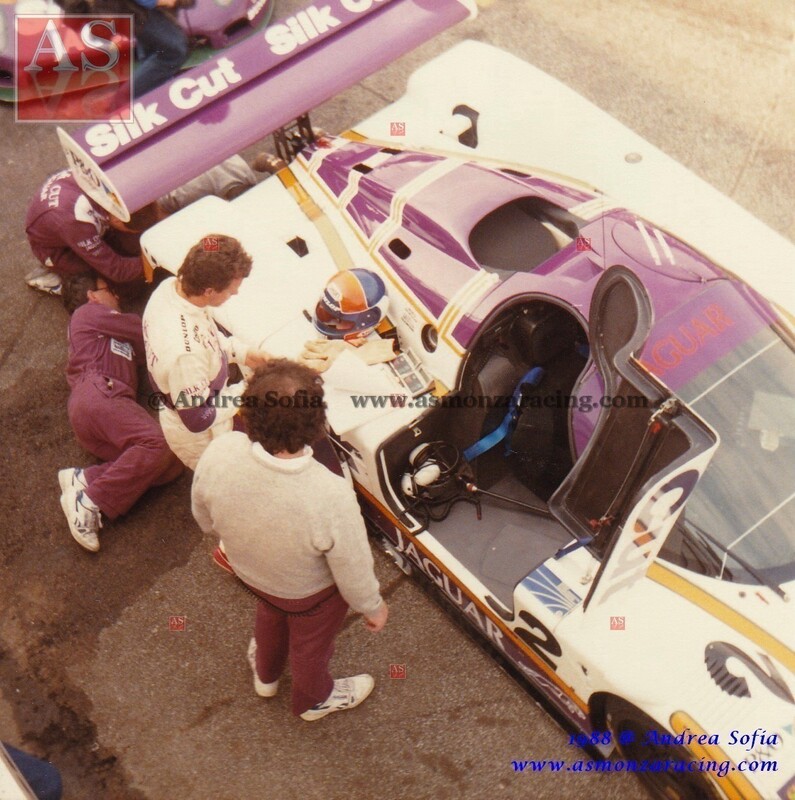 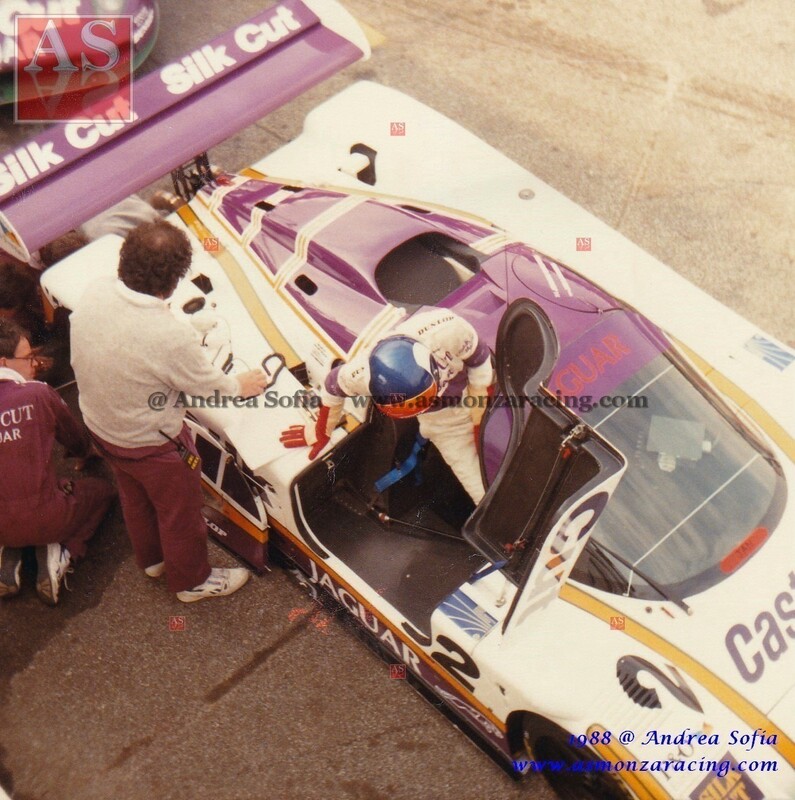 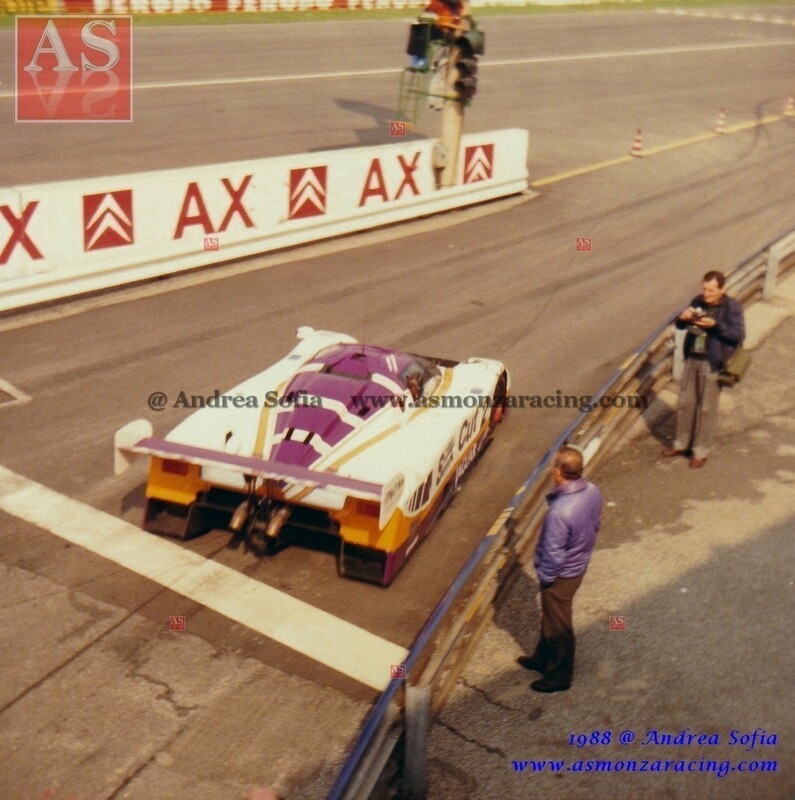 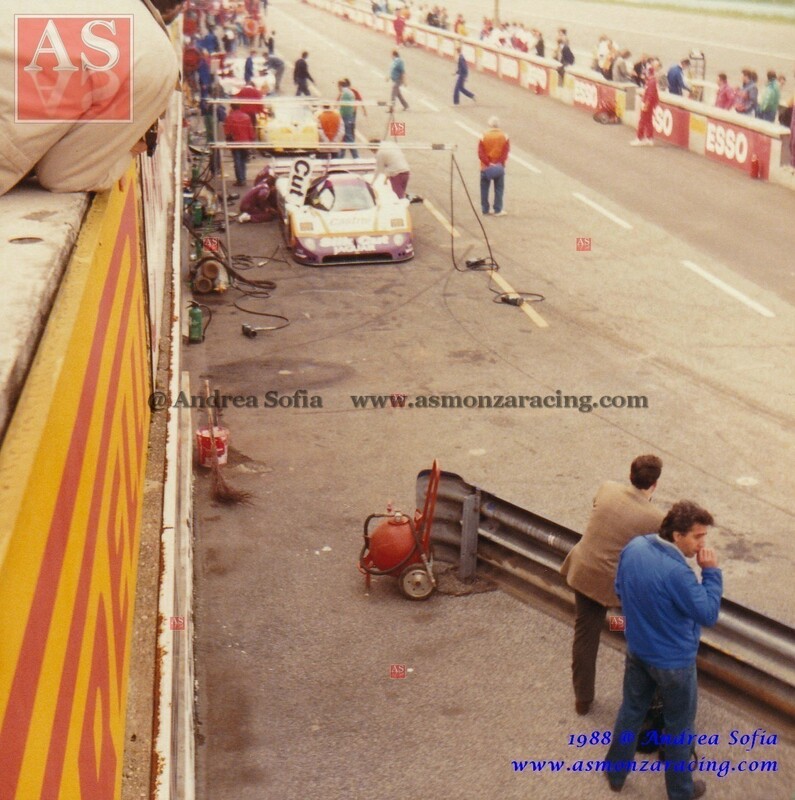 Monza 1000 km, 1988. Silk Cut TWR Jaguar XJR-9 chassis #TWR-J12C-488 Jan Lammers/Johnny Dumfries
Sauber C9-88 Mercedes chassis #87-C9-02
Although the Sauber C9-88 had an aluminium monocoque, lesser than the carbon fibre jaguar's chassis, it was powered by the Mercedes M117 4973 cc V8 engine tuned by the Swiss specialist Mader, supercharged with two KKK devices that allowed to develop a power close to 800 hp, in qualifying configuration. At Monza the Team Sauber-Mercedes brought two cars, the chassis C9-88-02 as a race car and the chassis C9-88-01 as a T-Car. The team's only crew consisted of Jean-Louis Schlesser, Mauro Baldi and Jochen Mass, already winners of the first championship race at Jerez. At the end of qualification days they were the fastest, scoring pole position at 1: 31.69 and after a hard-fought race, they took second place despite the accident with Lammers at the Roggia chicane and  some consumption troubles. 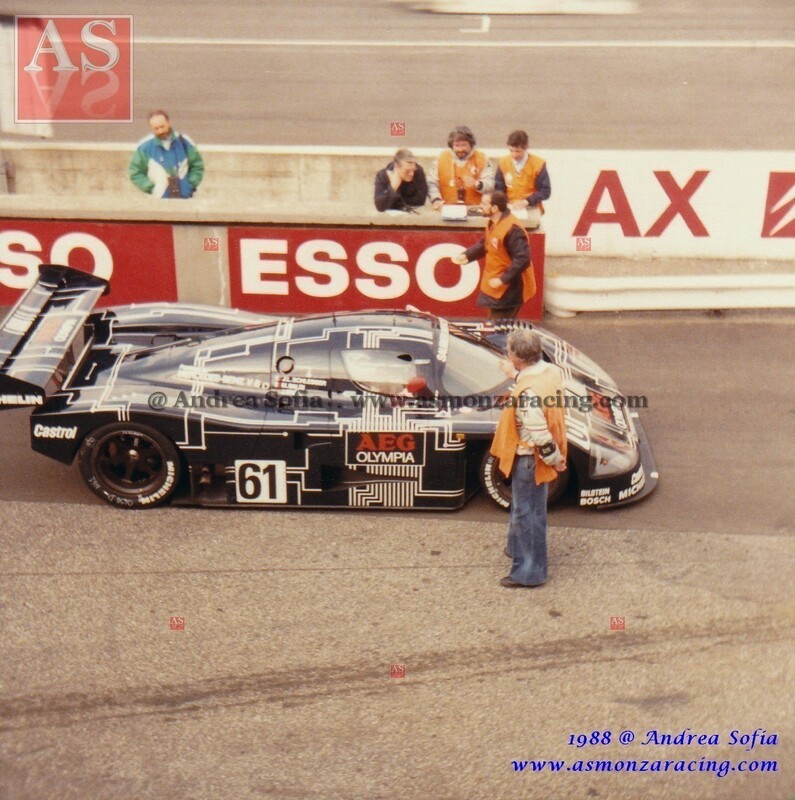 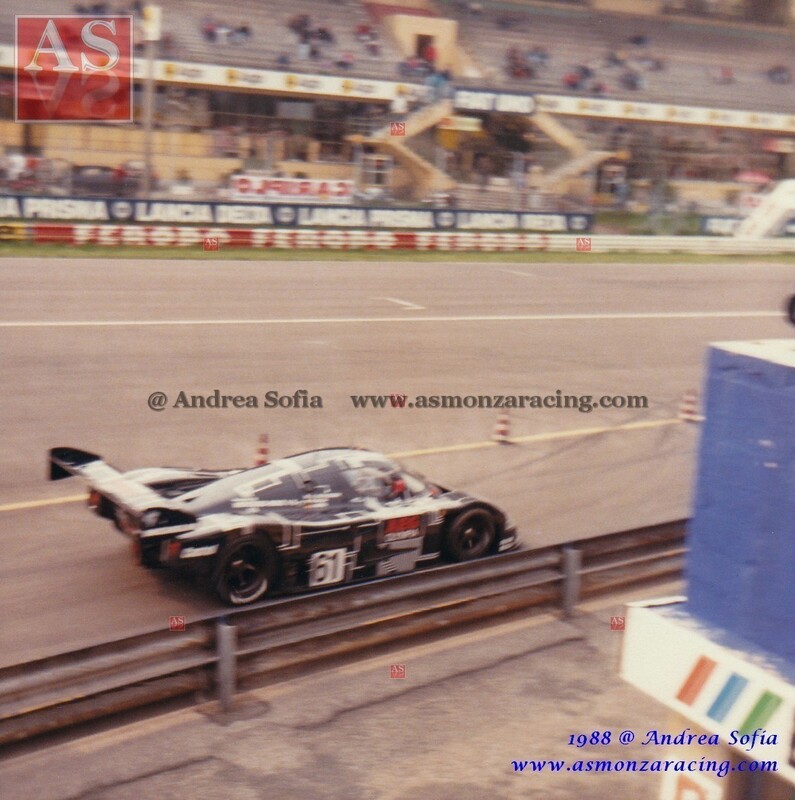 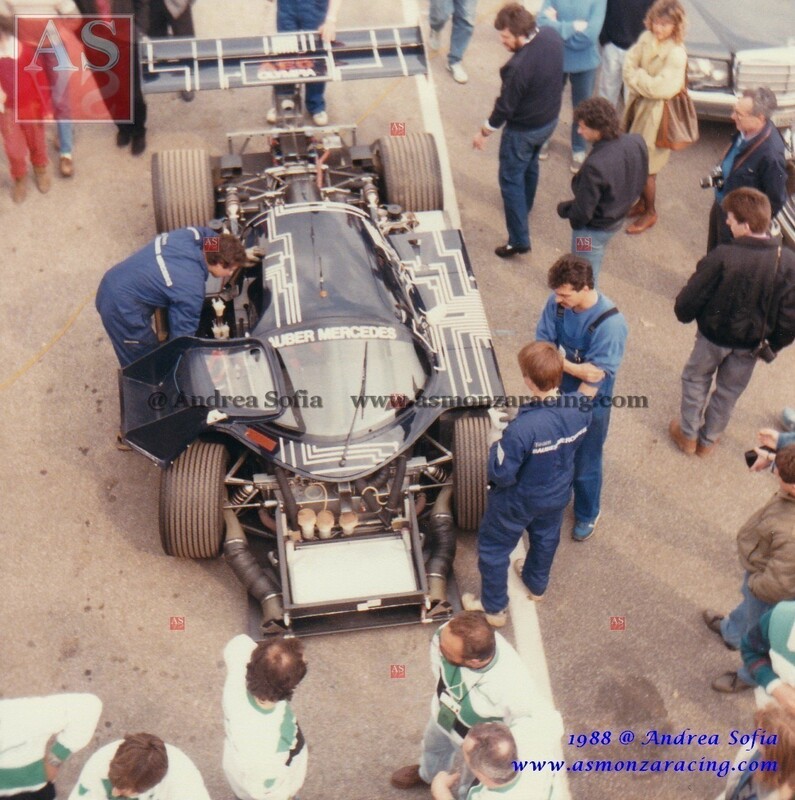 Monza 1000 km, 1988. Sauber-Mercedes C9-88 chassis #87-C9-02 Jean-Louis Schlesser/Mauro Baldi/Jochen Mass
Porsche 962C
No longer technically in step with Jaguar and Sauber-Mercedes, Porsche was present at Monza with 6 cars, all managed by private teams, 3 cars managed by Team Brun, 2 by Team Joest, one for Team Kremer, entered for Wolker Weidler and Bruno Giacomelli and one for the very private Swiss Team Salamin for the drivers Dudley Wood and Antoine Salamin himself. In the end the Stuttgart home achieved an honourable result by winning the lowest step of the podium with the Team Brun's car driven by Massimo Sigala and Oscar Larrauri.
Team Joest - Porsche 962C chassis #116 (8) e chassis #129 (7)
Team Joest in the colours of the Blaupunkt, lined up chassis # 129, built by Joest, for Klaus Ludwig and Bob Wollek with the number 7 and the chassis #116, built by Thompson for Frank Jelinski and "John Winter", whose real name was Louis Krages, with the number 8. Wollek and Ludwig in practices were very fast, proving that even if obsolete, in the expert hands the 962C could still prove something. In the race they were among the absolute protagonists, not caring about fuel consumption but in the end they had to stay in the pits for six laps with the tank almost dry, finishing the race in fifth place. Quiet and profitable race for the duo "Jelinski-Winter", fourth at the finish line after starting from the eighth position on the grid. 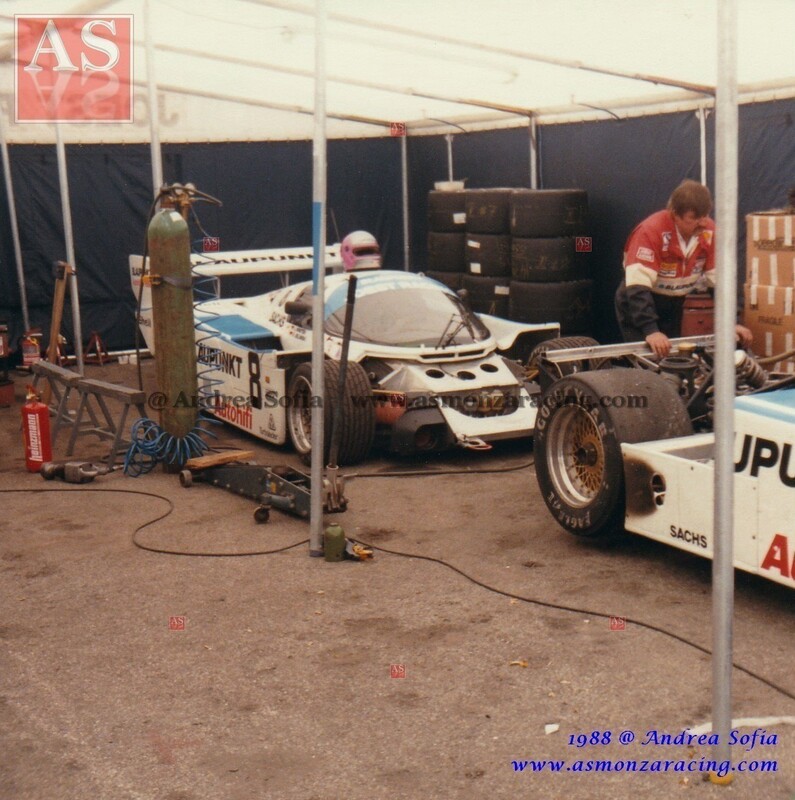 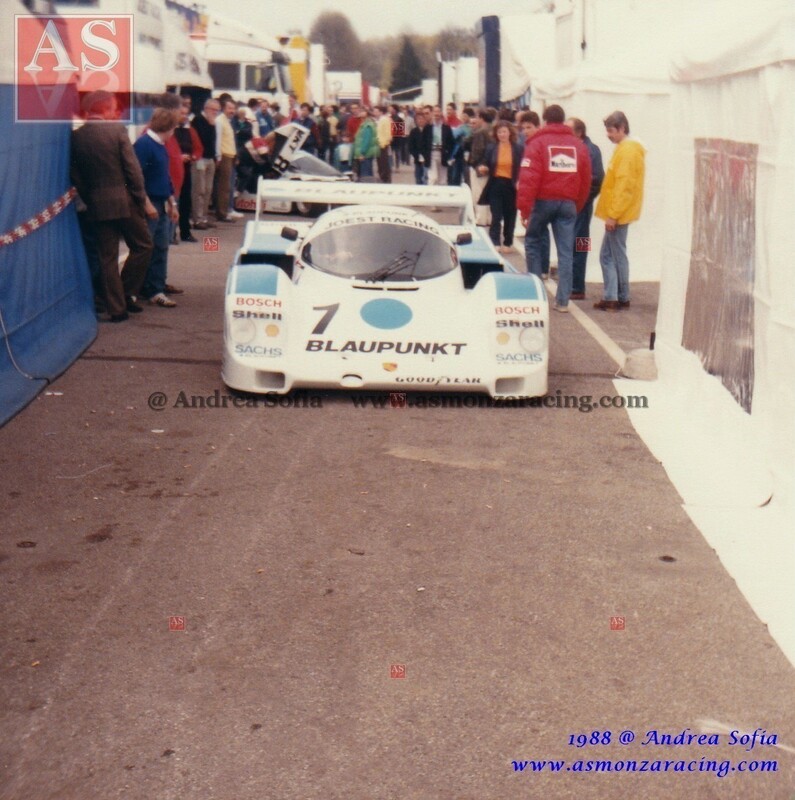 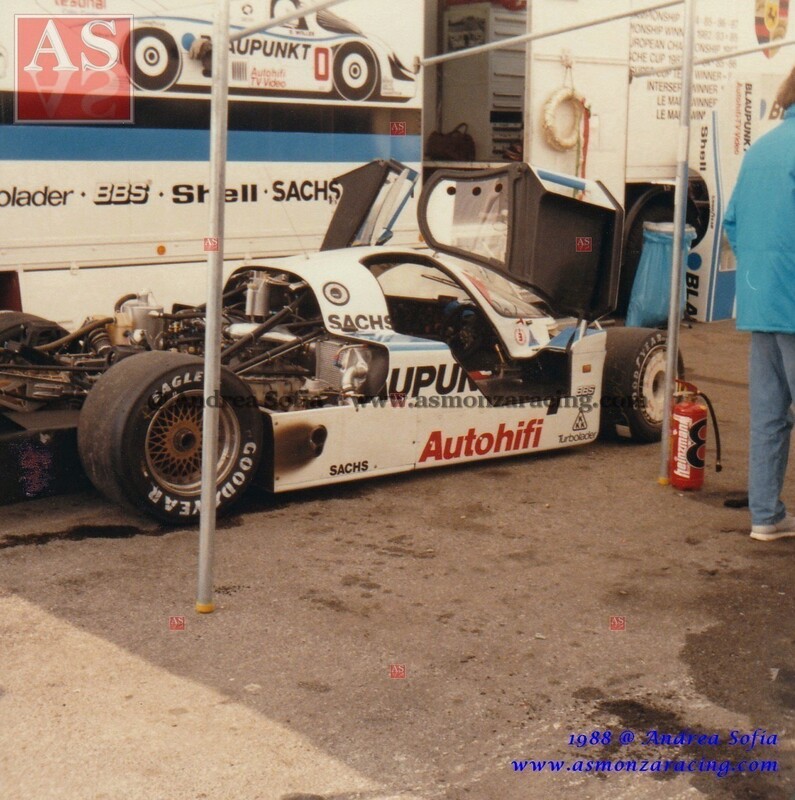 Monza 1000 km, 1988. Joest Porsche 962C chassis #129 (7) Klaus Ludwig/Bob Wollek
Team Brun - Porsche 962C chassis #115 (6) e chassis #002BM (5)
Team Brun brought three Porsche 962Cs: Chassis #115 for Massimo Sigala and Oscar Larrauri, Chassis #117 for Uwe Schäfer and Walter Brun himself and chassis #002BM, build in carbon fibre by Thompson, for Manuel Reuter and Jésus Pareja. With a smart and careful race, the top crew composed by Sigala and Larrauri finished third after having obtained the third fastest time on practices, while the Reuter-Pareja crew, seventh at the start, finished the race on lap 144  destroying the car against the barriers of the second Lesmo corner and also involving the car of Sigala-Larrauri that after a stop for the replacement of a wheel managed to continue. Colourless instead the race of the Porsche 962C driven by Schäfer-Brun, stopped at the 114th lap with the broken gearbox. 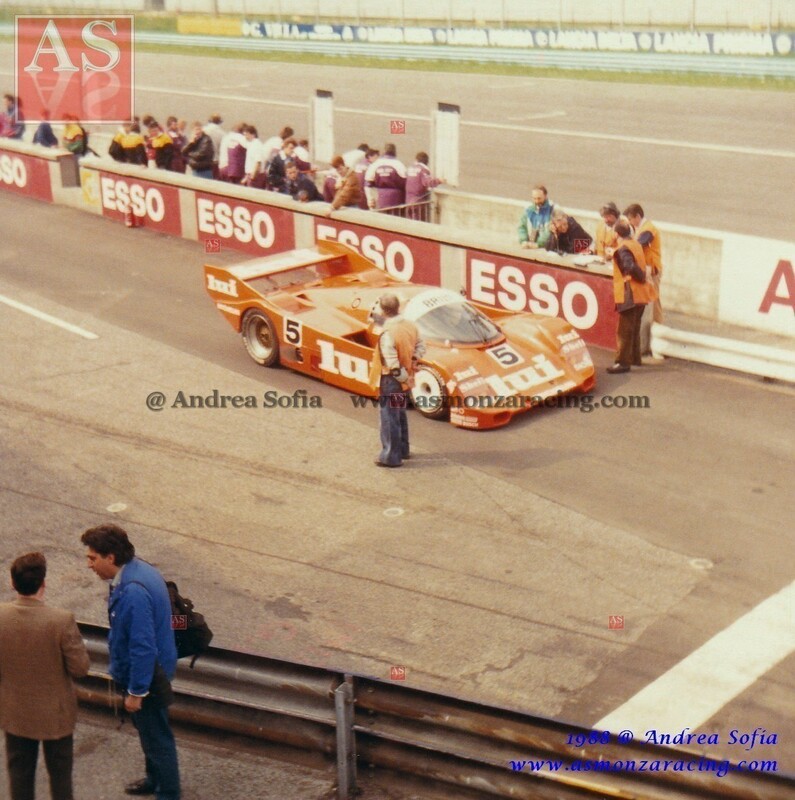 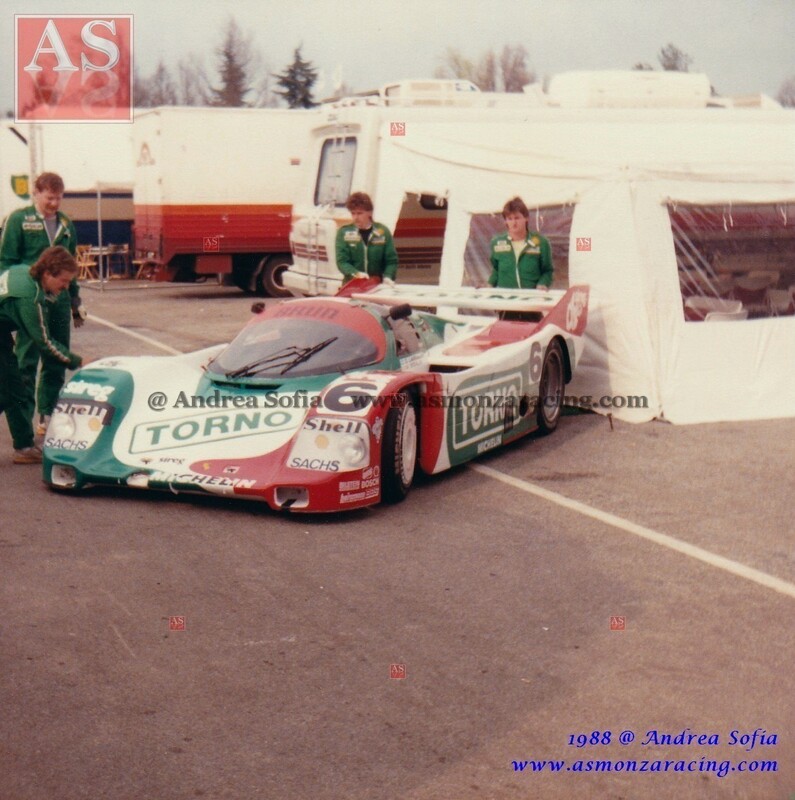 Monza 1000 km, 1988. Brun Porsche 962C chassis #115 (6) Massimo Sigala/Oscar Larrauri
Cougar C20B Porsche  chassis #01
The Cougar C20, built by the French team Courage Competition, was equipped with the 6-cylinder Porsche Type-935 turbo and was making its debut at Monza. Roberto Ravaglia and Pierre-Henry Raphanel obtained the seventh final place at 11 laps from the winners, after starting from the thirteenth position. The second and last race of the Cougar C20 in 1988 was the Le Mans 24 hours. 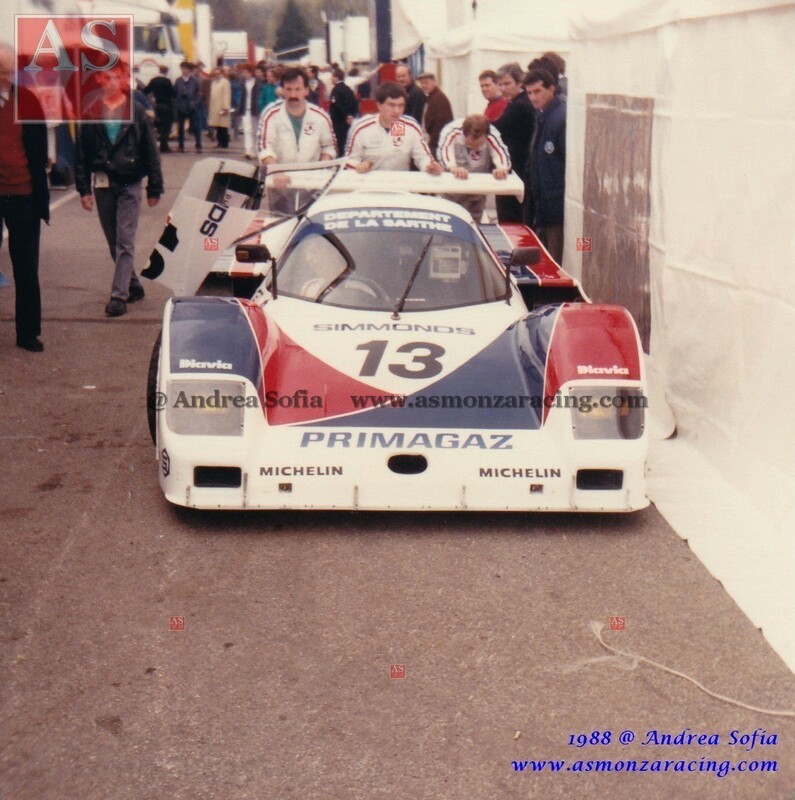 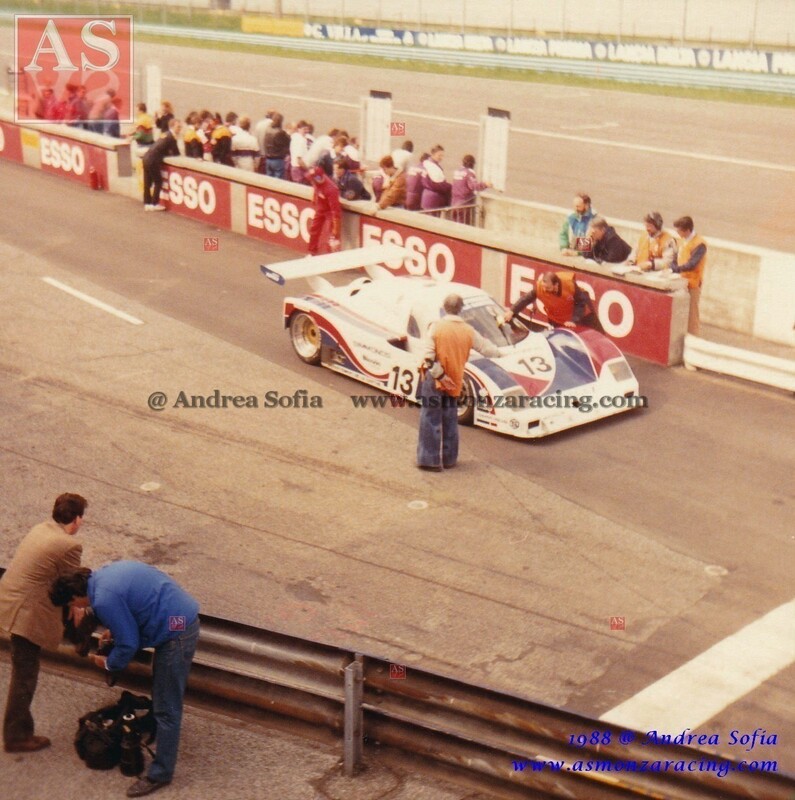 Monza 1000 km, 1988. Cougar C20 Porsche chassis #01 (13) Courage Competition Roberto Ravaglia/Pierre-Henry Raphanel
Lancia LC2/88 Ferrari chassis #0003B Scuderia Mussato Action Car
In 1986 Luigi Mussato had taken over all the material of the Lancia group C and after the catastrophic accident of Bruno Giacomelli at Zeltweg during the tests of the Interserie race where driver was seriously injured and the Lancia LC2 / 85 #0003 was destroyed, the 1988 was due be the year of the relaunch for the small and organized Scuderia Mussato Action Car. Two new monocoque were made by Dallara on Lancia specifications and updated to the new regulations, the suspensions were redesigned, the front section was reduced, the Ferrari V8 turbo engine remained unchanged but was moved more to the centre and also the body was re-built using carbon fibre. The Lancia LC2 turned out to be a completely new car and the debut took place at the 1988 Monza 1000 km driven by Andrea De Cesaris and Christian Danner. In practices the car turned out to be rather slow and qualified in fifth row with a time of 1'38 "27. The race lasted only 11 laps then the car returned to the pits with a broken turbine. 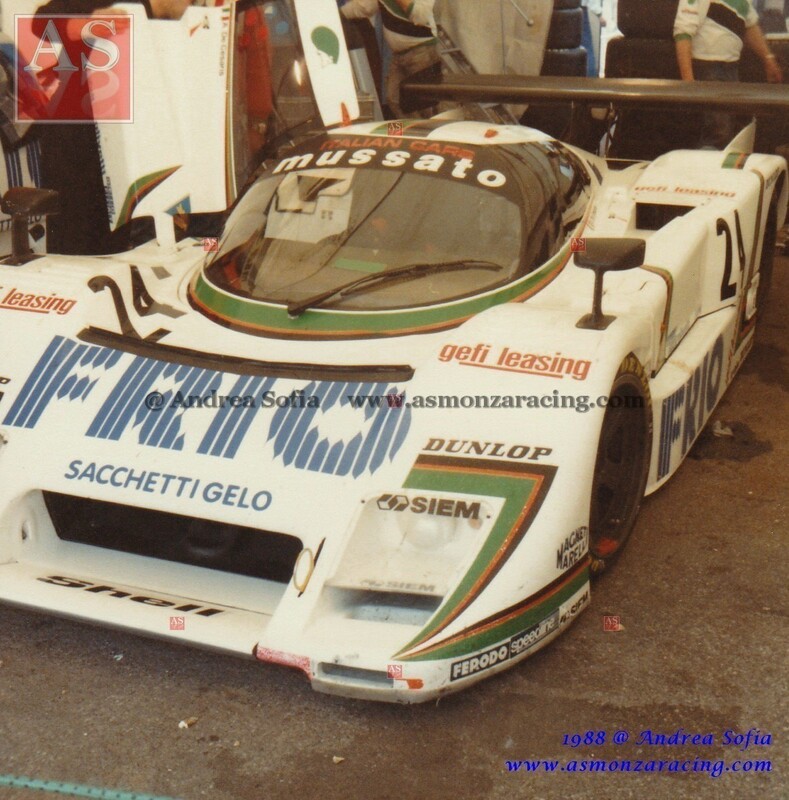 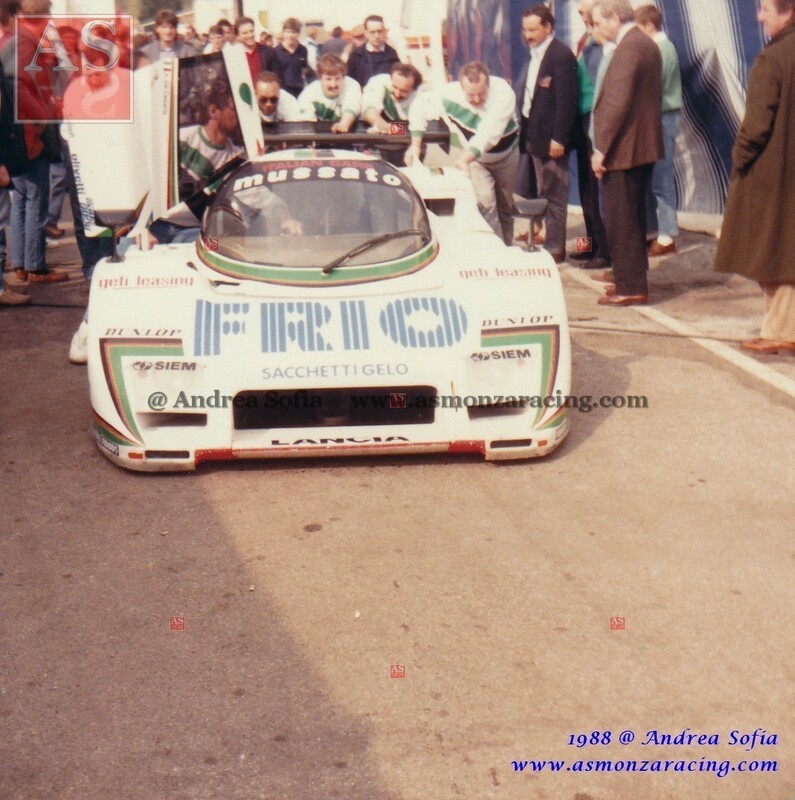 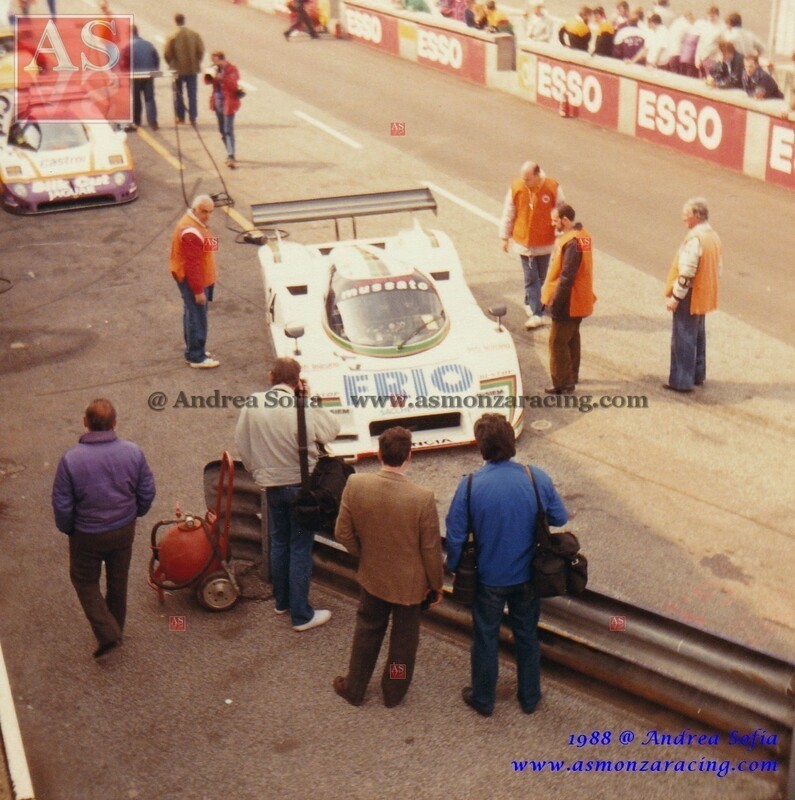 Monza 1000 km, 1988. Lancia LC2/88 Ferrari chassis #0003B (24) Mussato Action Car Andrea De Cesaris/Christian Danner
Spice SE88C Ford Cosworth DFL  chassis #003 (111) Spice Engineering
Spice SE86C Hart 418T chassis #005 Chamberlain Engineering
The Chamberlain Engineering Team Spice SE86C, equipped with the 4-cylinder Hart 418T turbo engine, was the fastest among the C2 group at the end of the practices. The crew, composed by the Englishman Nick Adams and the South African Graham Duxbury, started from the sixth row with the eleventh time. On lap 38 they were forced to retire due to an electrical failure. 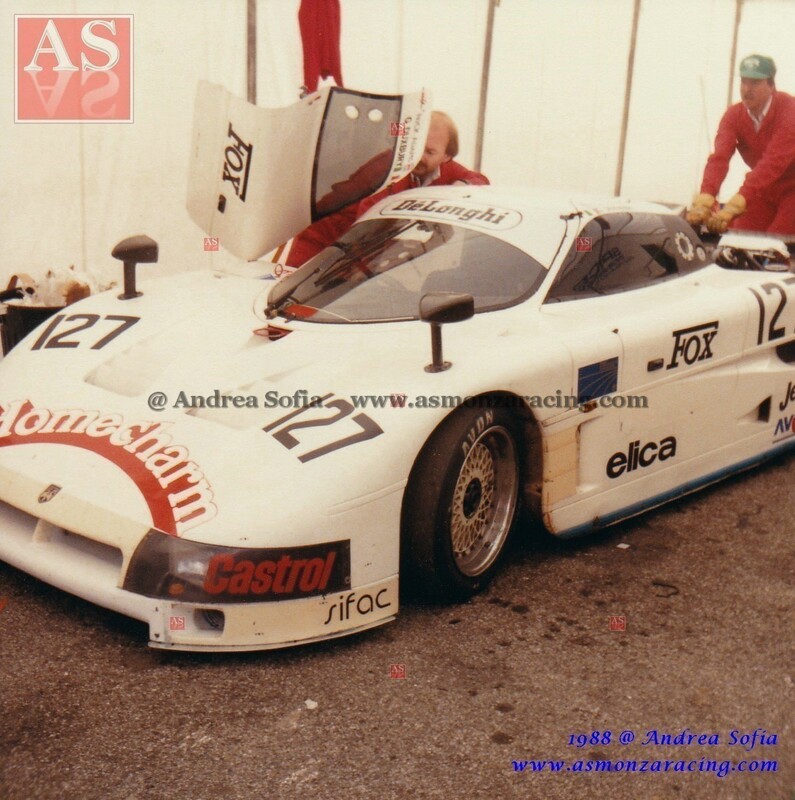 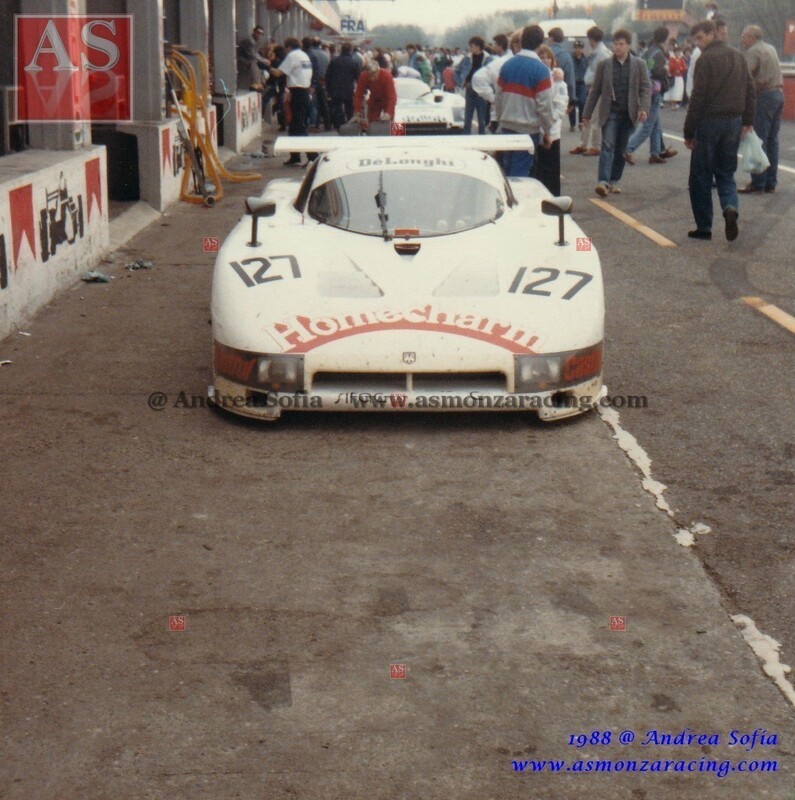 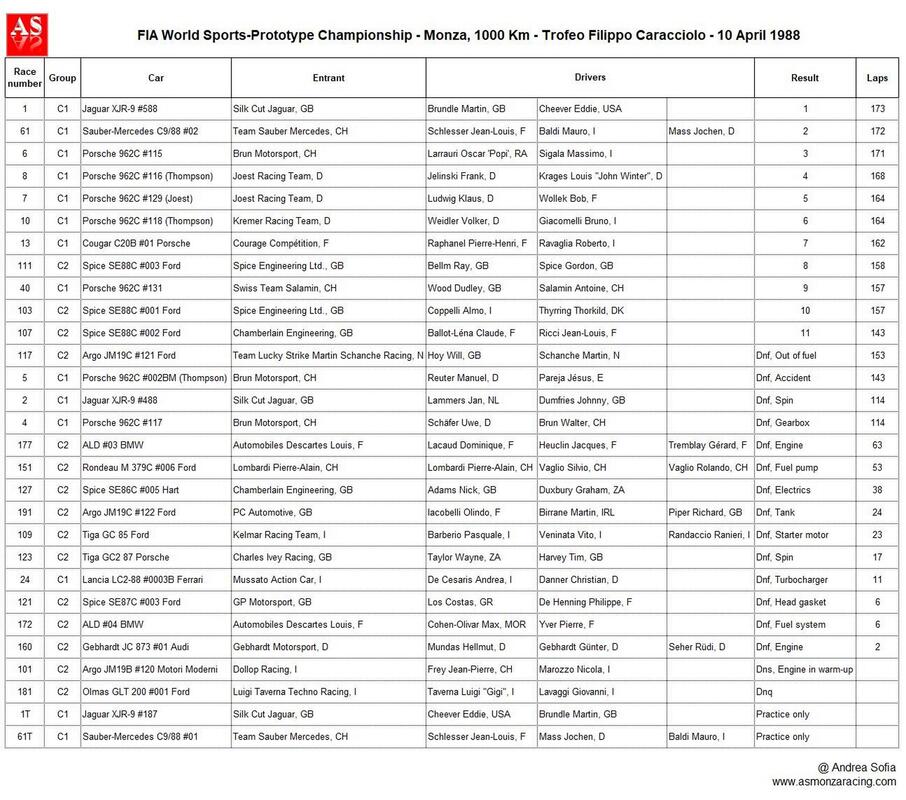 1000 Km di Monza 1965-2008 - Aldo Zana - Giorgio Nada Editore
In this beautiful book signed by the automotive historian Aldo Zana, all the editions of the 1000 Km of Monza are described from 1965 to 2008. For each race, in addition to the detailed report, the starting grid and the final ranking are shown, all accompanied by magnificent archive photographs, very often unpublished. The book is written in Italian. It is a precious and unique book especially for those who, like me, have personally witnessed several of the races described. This book is highly recommended.