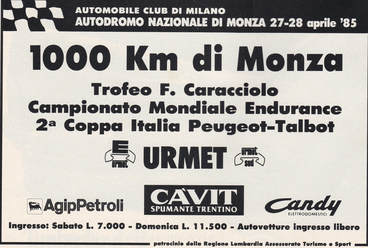 One of the protagonists of the second race of the Endurance World Championship at Monza was the wind. A strong wind at over 90 km / h hit the Autodromo Nazionale causing two trees to fall between the Roggia chicane and the first corner of Lesmo ending the race on lap 138. At the time of the interruption, I was at the parabolica corner and when I no longer saw the cars pass and I saw the red flag exposed, for a moment I thought about the worst. Luckily nobody got hurt. 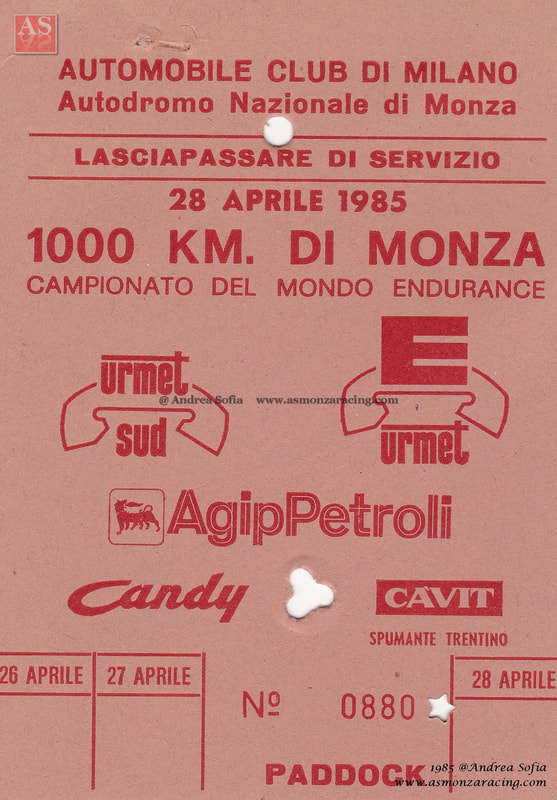 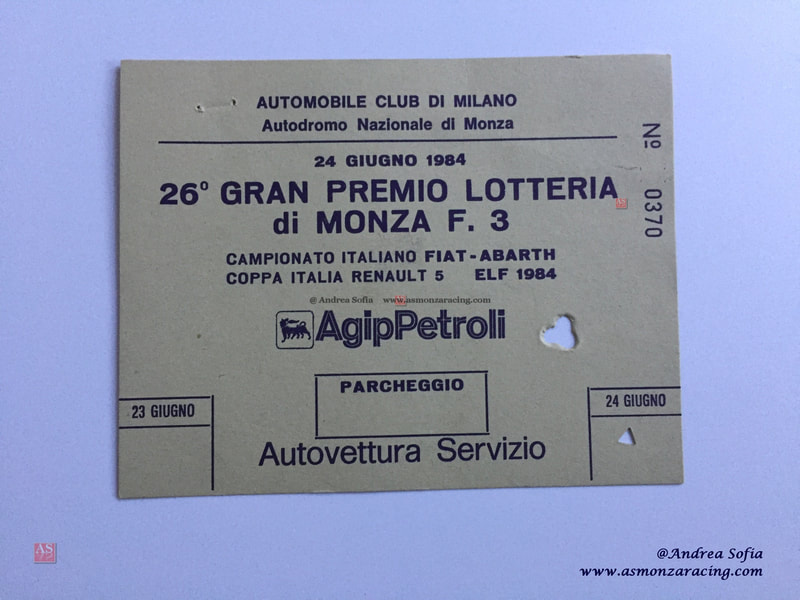 For the 1985 season, restrictions on the amount of fuel usable in a  1000 km race, were tightened. The limit for the C1 groups was raised to 510 litres compared to 600 of the previous year. In addition to this, 4 complete refuelling were made mandatory during the race, to fill the tank with a mandatory capacity of 100 litres. With the refuelling device set by regulation to deliver no more than 50 litres per minute, the stop needed for each refuelling was at least 2 minutes. The other refuelling were free and each team could manage them according to need or strategy. For the C2 group, there were 330 litres available. Of course, the controversy regarding the alleged irregularities of the refuelling systems was not long in coming. The attribution of the scores was also changed and for 1985, the points were attributed to the teams and no longer to the brands. In particular, the Monza race was awarded only the score for the drivers' classification. Eventually, the trees that fell due to the wind spared, to the few present, the final laps of the race with the cars slowed down to avoid running out of fuel. 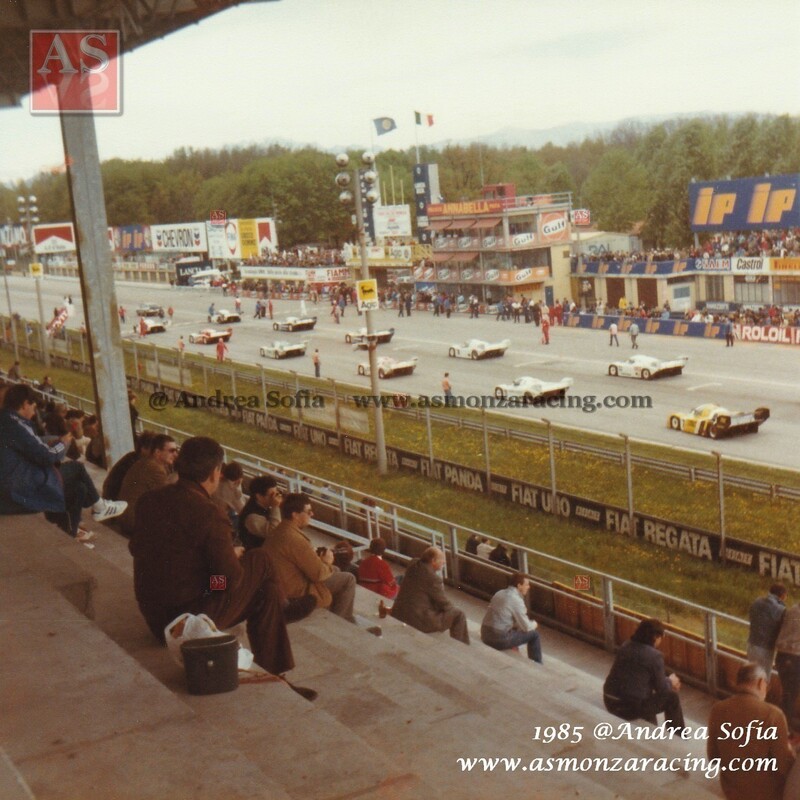 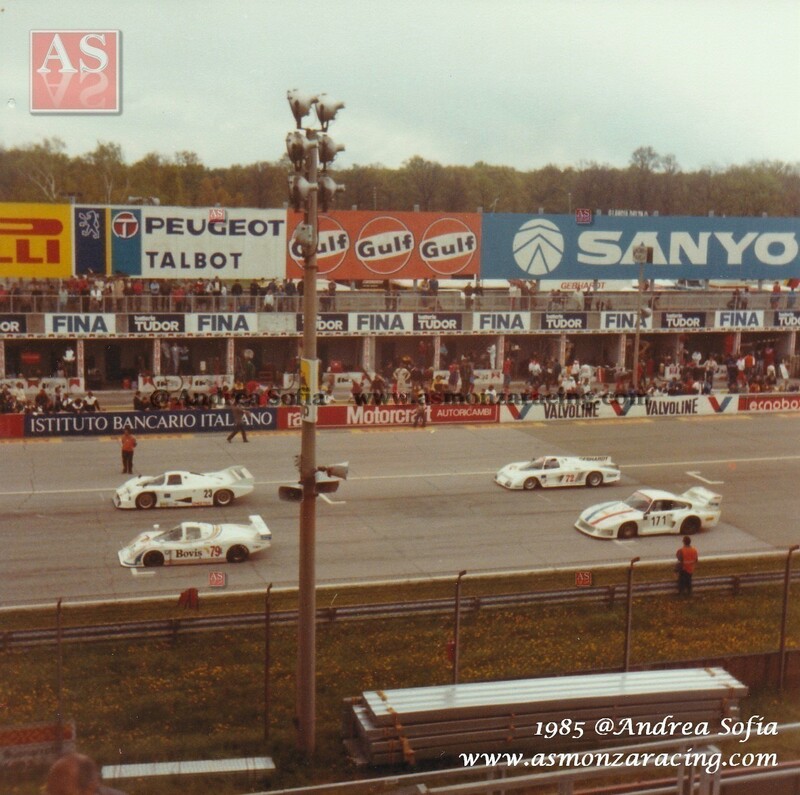 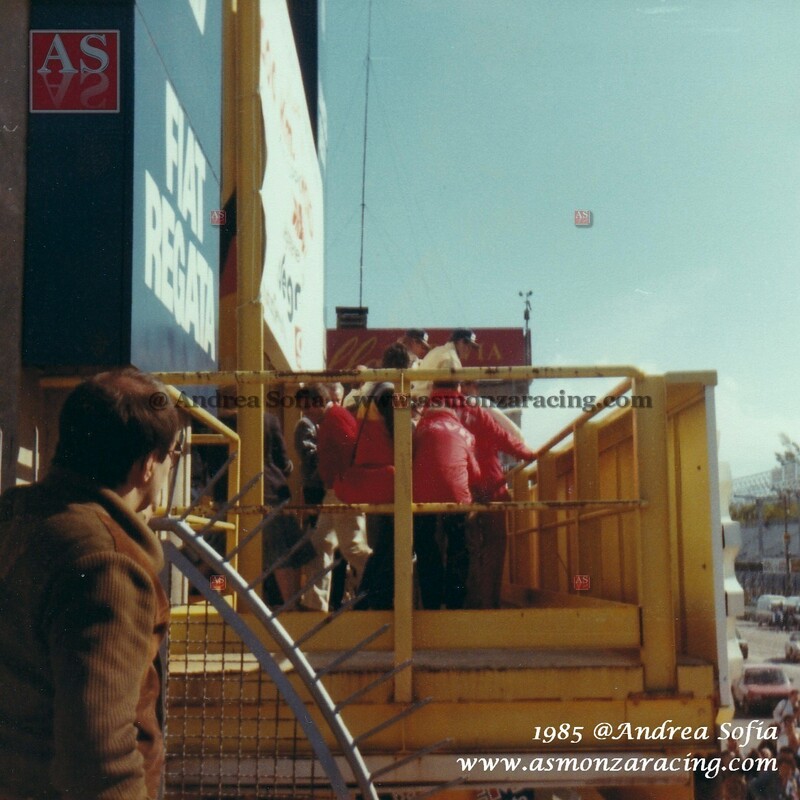 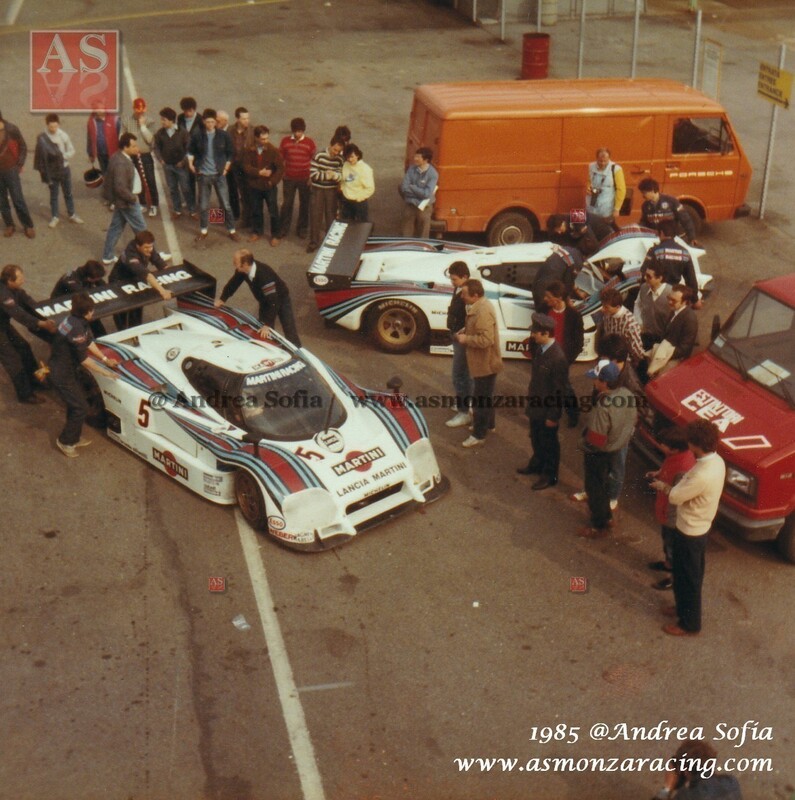 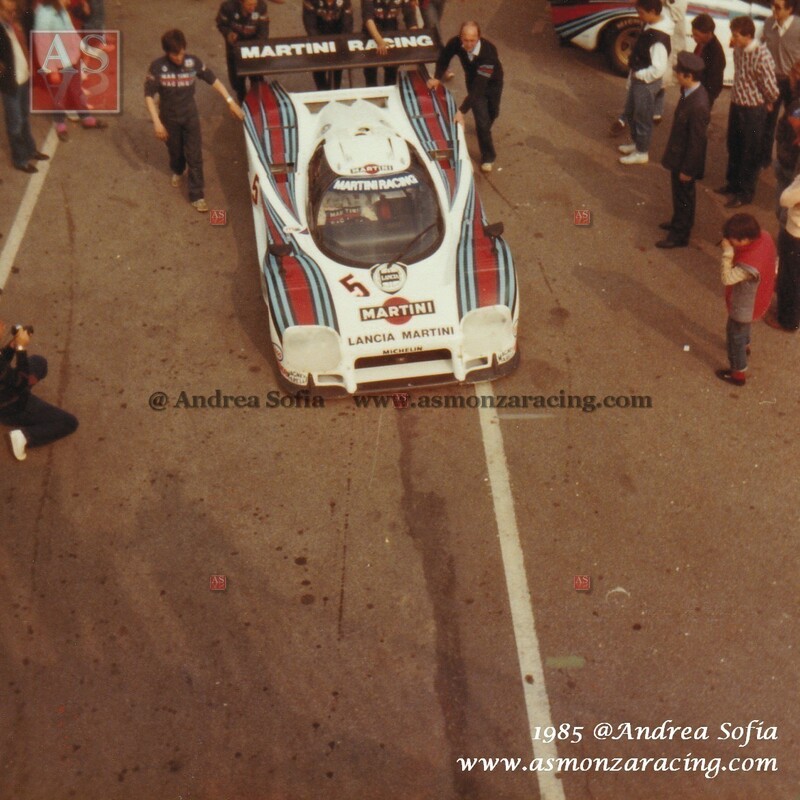 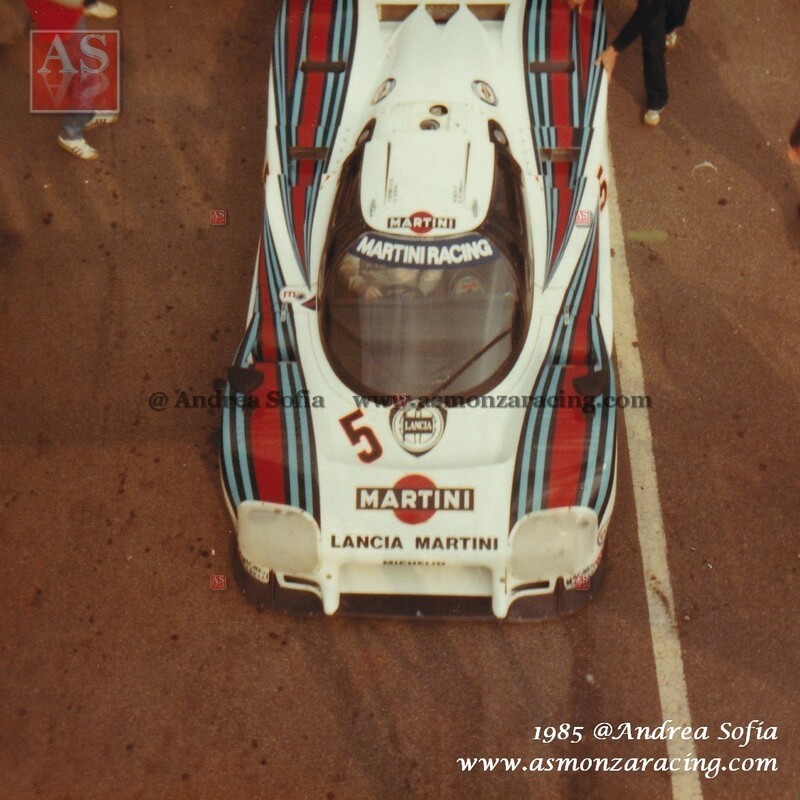 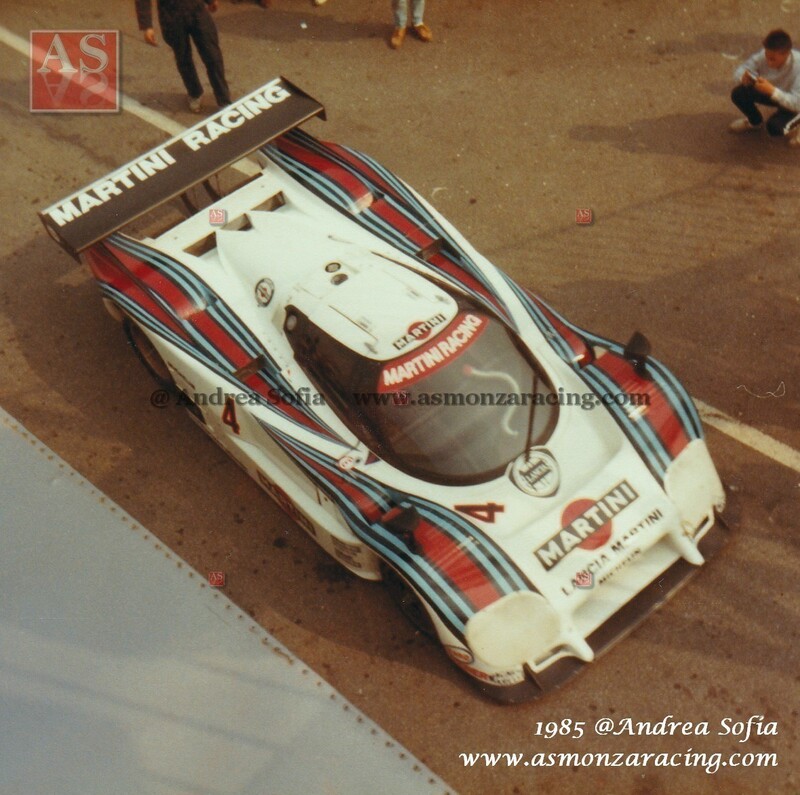 Monza 1000 Km 1985 Lancia Martini LC2-85 chassis #003 Patrese-Nannini.
The practices were dominated by the Lancia LC2-85 masterfully driven by the Patrese-Nannini and Wollek-Baldi-Cesario crews. Riccardo Patrese with the car number 4 scored the pole position with an incredible time of 1'31'00 while Bob Wollek was second, just over 2 seconds behind, with the car number 5. At the start the two Lancia started very fast and settled in command. On lap 46 while in second place, Baldi was rammed by Surer's Porsche 962C which attempted to overtake and the Lancia was trapped in the sand of parabolica corner. Patrese and Nannini finished third with the regret that, if the race had not been interrupted, they would certainly have fought for the victory with the official Porsche 956-83 # 009 of Derek Bell and Hans-Joachim Stuck who came second.
Porsche 956C Rothmans Racing 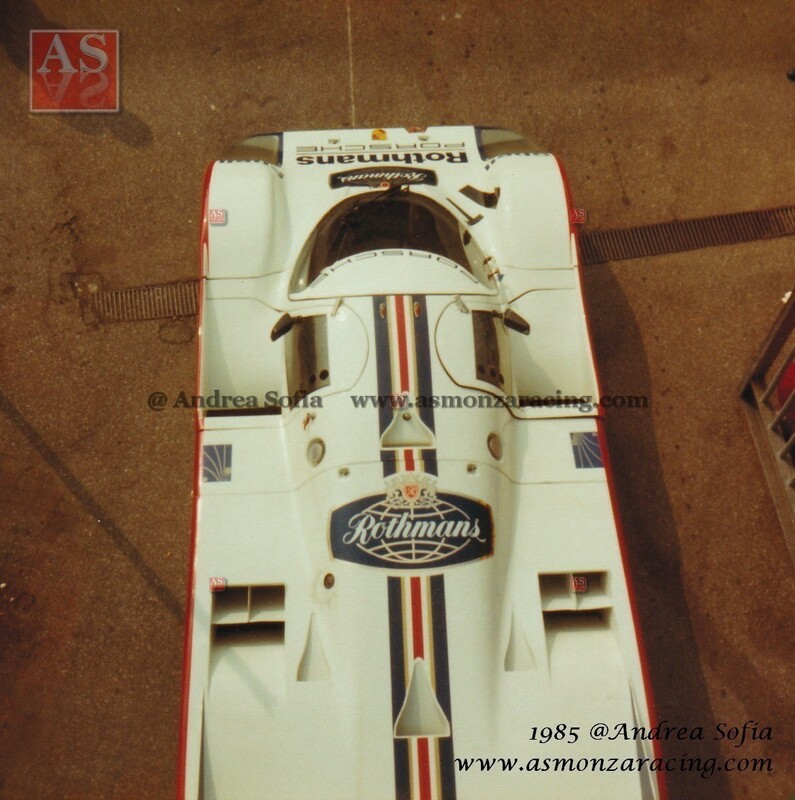 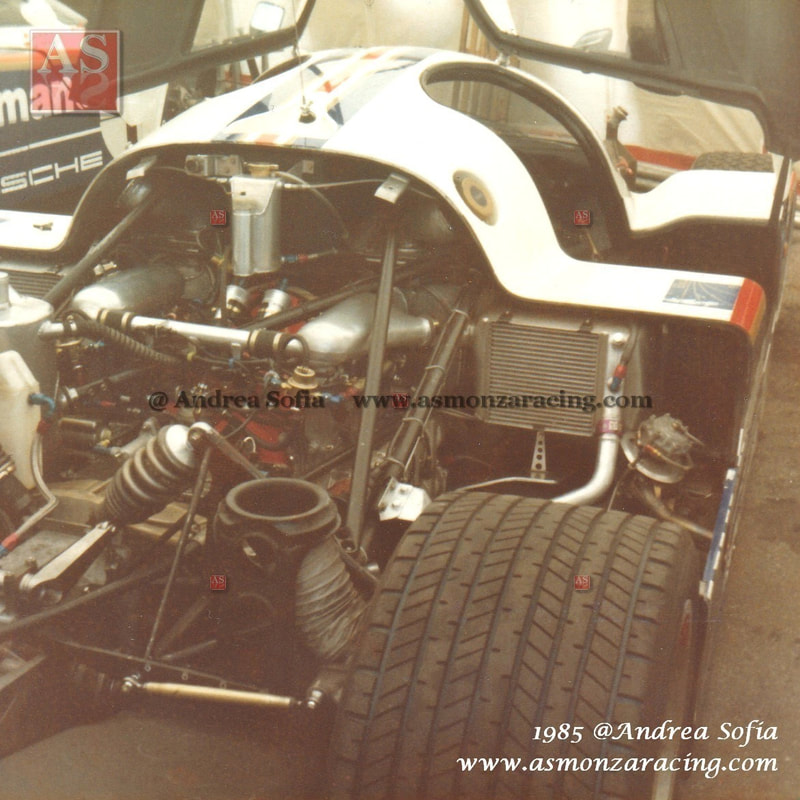 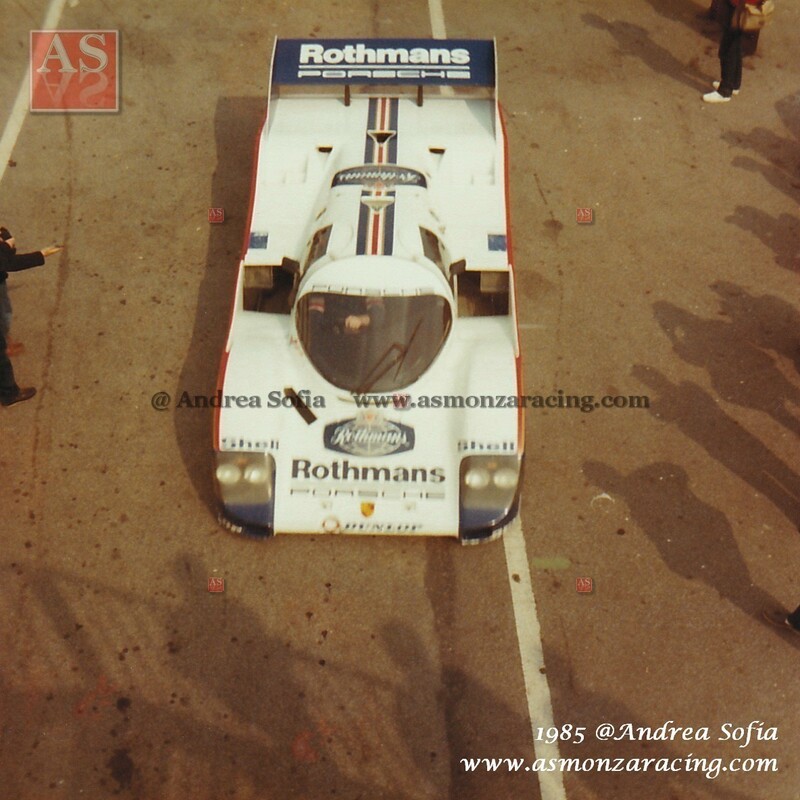 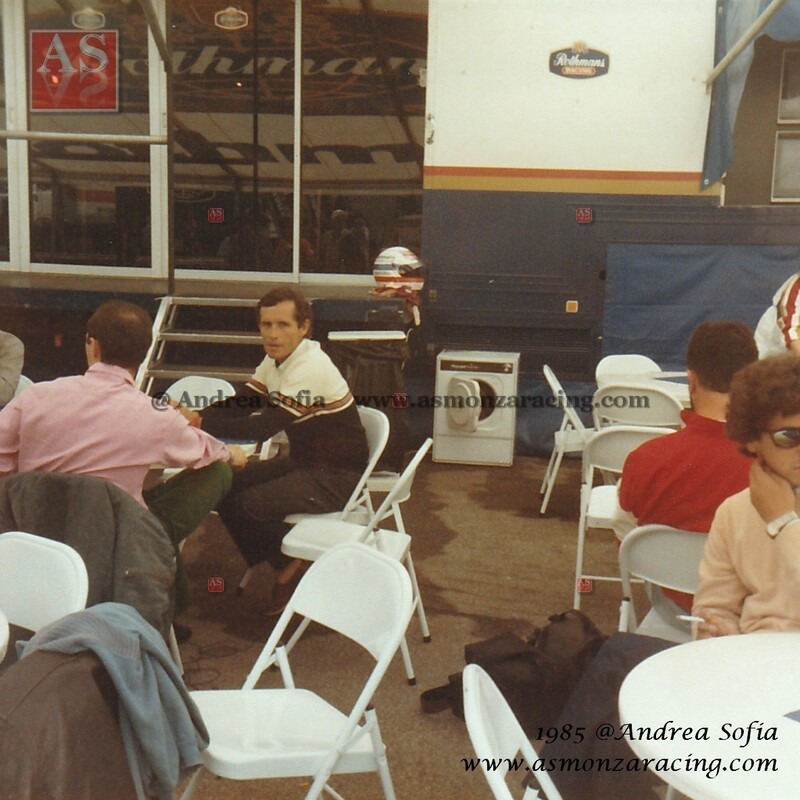 Monza 1000 Km 1985 Jackie Ickx.
During the free practice on Friday afternoon, due to a failure in the electronic injection system, the works Porsche 962C of Derek Bell and Hans-Joachim Stuck, with the German behind the wheel, caught fire after the first chicane, being completely destroyed and forcing the crew to fall back on the spare car, the 956-83 # 009 with which they got the sixth time in practice and the second place in the race. Jacky Ickx and Jochen Mass, with the works 962C chassis # 002, both in practice and in the race placed in fourth place.
Porsche 956C chassis # 110 Kremer Racing
Porsche 956B chassis # 115 Kremer Racing
Cheetah G604 chassis #1 Aston Martin Chuck Graemiger Team 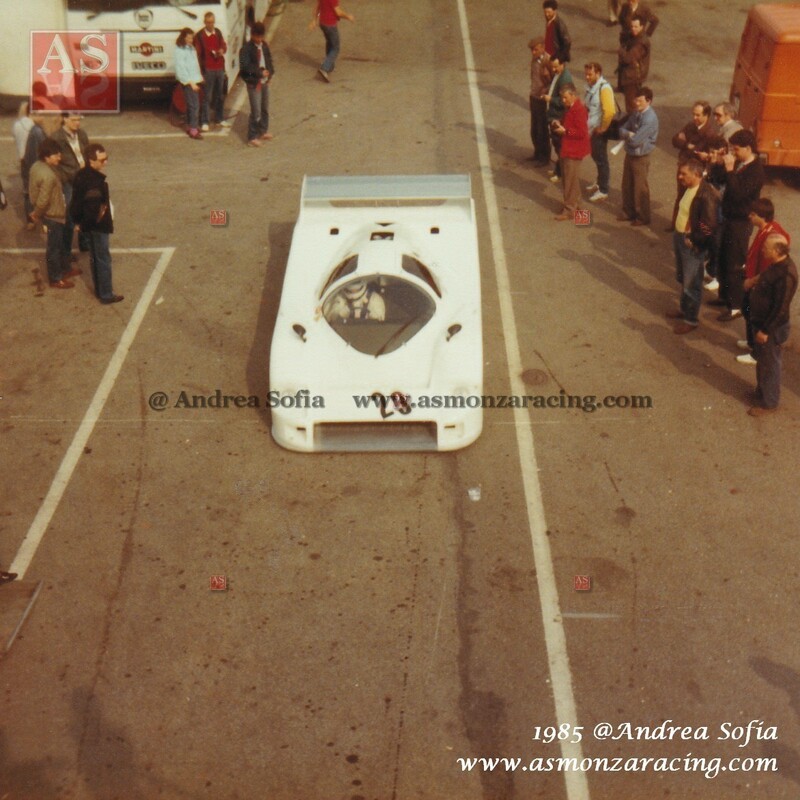 Monza 1000 Km 1985 Cheetah G604 Aston Martin ch G604 chassis #1 DeDryver-Brancatelli
The Cheetah G604 chassis # 1 driven by Gianfranco Brancatelli and Bernard de Dryver. The Chuck Graemiger team entered in group C1 this car, equipped with a 5.3 litre V8 Aston Martin tuned by Tickford and with a carbon fibre and kevlar chassis. The car qualified in eighteenth place but on the third lap of the race it was already stopped due to electrical problems.
Ecosse C285 chassis #02 Ford Cosworth DFV Ecurie Ecosse 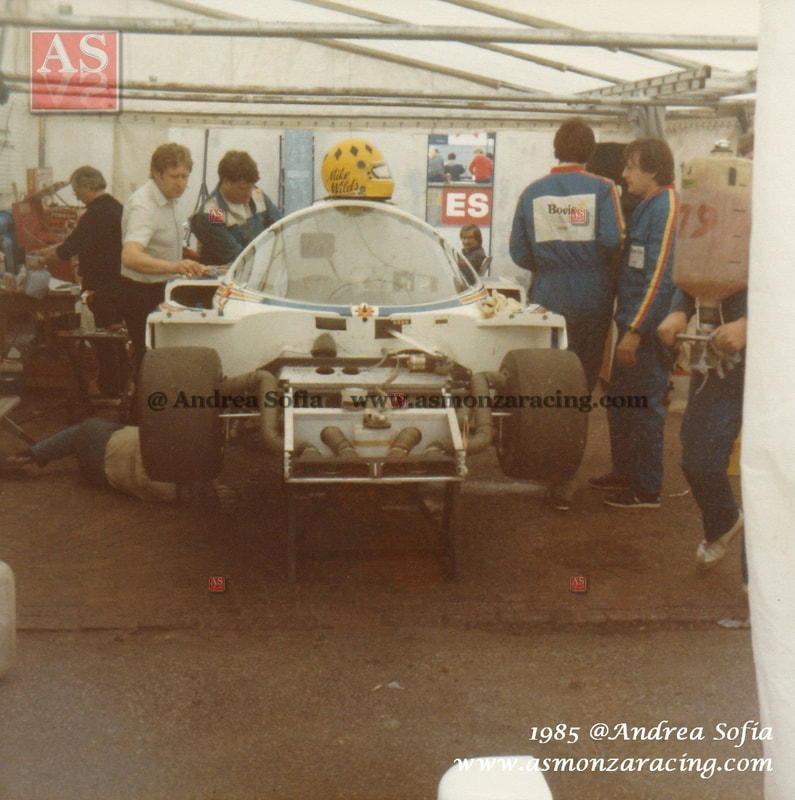 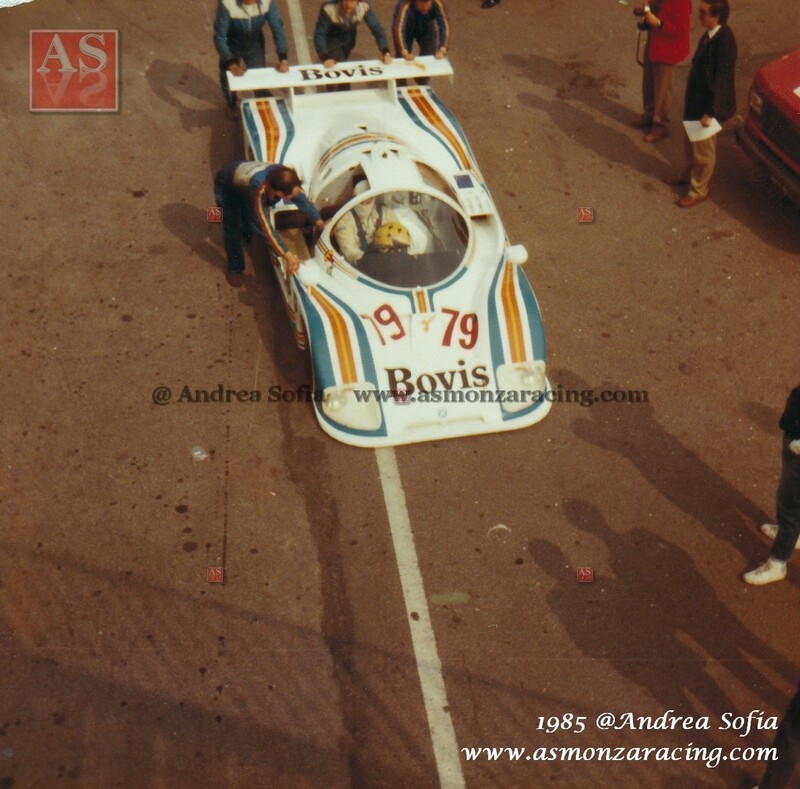 Monza 1000 Km 1985 Ecosse C285 Ford chassis #02 Mallock-Wilds-Leslie
Second in the C2 group Ray Mallock and Mike Wilds with the very valid Ecurie Ecosse' Ecosse C285 chassis # 02 powered by the Ford Cosworth DFV 3.3-litre. The car was derived from the previous year's C284 with a new chassis, improved aerodynamics and the beautiful livery of the sponsor Bovis. For this team it was the first race of the 1985 World Championship, not having participated in the first race at the Mugello circuit. In practices the crew, which was also composed of David Leslie who however did not take part in the race, qualified in 17th place and reached the finish line in tenth position 14 laps from the winners.
Gebhardt JC842 BMW chassis #01
Alba AR6 CARMA chassis #006
Nykjaer C2 BMW
Ceekar 83J Ford Cosworth BDX chassis #001 Ark Racing
Tiga GC284 Ford Cosworth BDT chassis #277 Roy Baker Promotion
URS C83 BMW chassis #005 Jens Winter Castrol Team 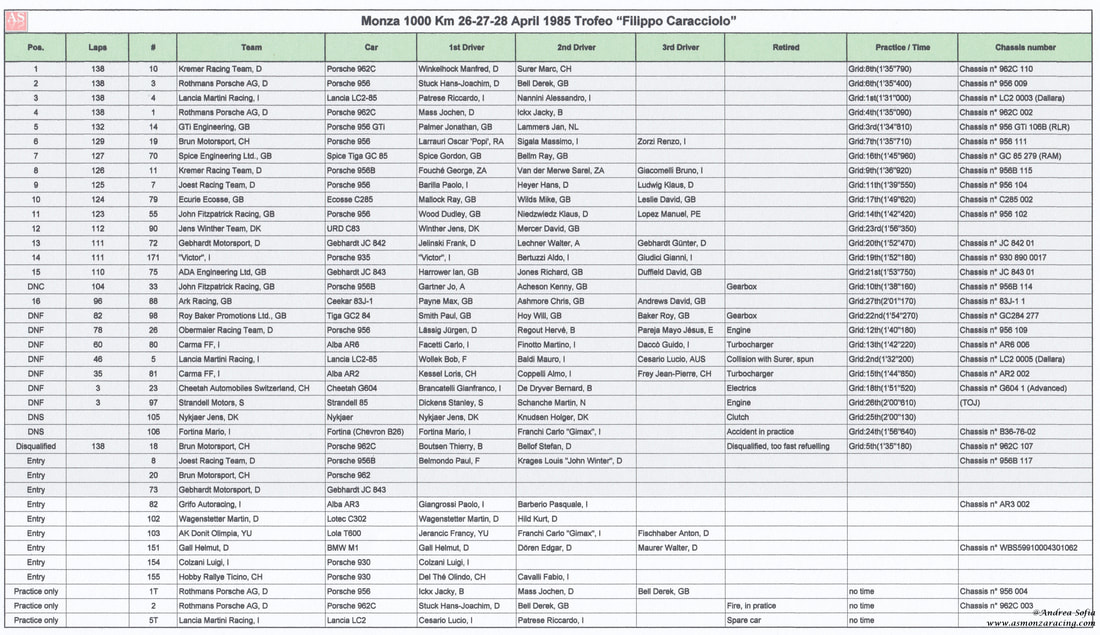 Link:
Porsche 956B #118 1984-85
Lancia LC2-85 #0007 1985
1000 Km di Monza 1965-2008 - Aldo Zana - Giorgio Nada Editore
In this beautiful book signed by the automotive historian Aldo Zana, all the editions of the 1000 Km of Monza are described from 1965 to 2008. For each race, in addition to the detailed report, the starting grid and the final ranking are shown, all accompanied by magnificent archive photographs, very often unpublished. The book is written in Italian. It is a precious and unique book especially for those who, like me, have personally witnessed several of the races described. This book is highly recommended.