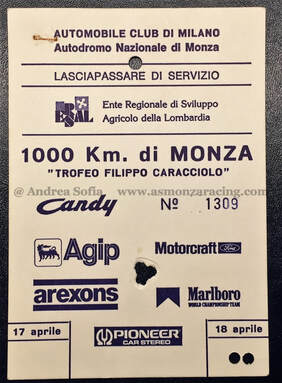 After two races postponed due to lack of entries, the endurance World Championship began at Monza with the classic 1000 kilometres on April 18, 1982. The new rules, imposed by the FIA ​​for the endurance races of the new Group C cars, had as its basic criterion the reduction of fuel consumption and for this, it required a precise number of liters of fuel to be used during the competition and a limited number of refuelling to be made. New cars and new rules, did not seem to be a point in favour for the classic race of Monza, in fact some of the teams entered in the championship, were not yet ready to compete, first of all the Porsche with the new 956s. Despite this, the entry list was not bad because, to increase the small number of new cars, there was a large number of group 6 and group 5 cars, allowed by the regulation, with in the lead, the two works Lancia LC1s, entered for the crews composed by Patrese-Alboreto and Ghinzani-Fabi. The Turin group 6 were quite competitive and ready to guarantee a top-level show. In any case, the 1982 Monza 1000 km would have remained in history because for the first time the new Group C competed on the track. Among the most interesting cars, in addition to the two Lancia LC1, there were two Sauber SHS C6, one for the crew composed of Stuck and Heyer and the other entered for Muller-Brun, the Ford C100 driven by Ludwig-Winkelhock-Surer, the Lola T610 driven by Edwards-Keegan, the Grid-S1 with the drivers Villota-Hoobs, two Rondeau M382 between such as the number 24 entered to Pescarolo-Francia-Rondeau, the WM Peugeot P82 of Dorchy-Frequelin-Raulet and the Porsche 936C Joest (a Porsche 936 deeply revised by Joest) for Bob Wollek and the Martin brothers. At the end of the practices, the two Lancia LC1 occupied the first row of the starting grid, followed by the Stuck-Heyer Sauber SHS C6, the Rondeau driven by Pescarolo-Francia-Rondeau, the Porsche 936C Joest and sixth place for the Ford C100. The race was very beautiful and intense until the end and the victory went to the Rondeau M382 n° 24 chassis 004 well driven by Pescarolo-Francia-Rondeau which with a fast race, even if not without moments of high tension, preceded the Porsche 935 K3 driven by Stommelen-Field and the Osella PA7 of the Italian crew Ciuti-Benusiglio-Piazzi. 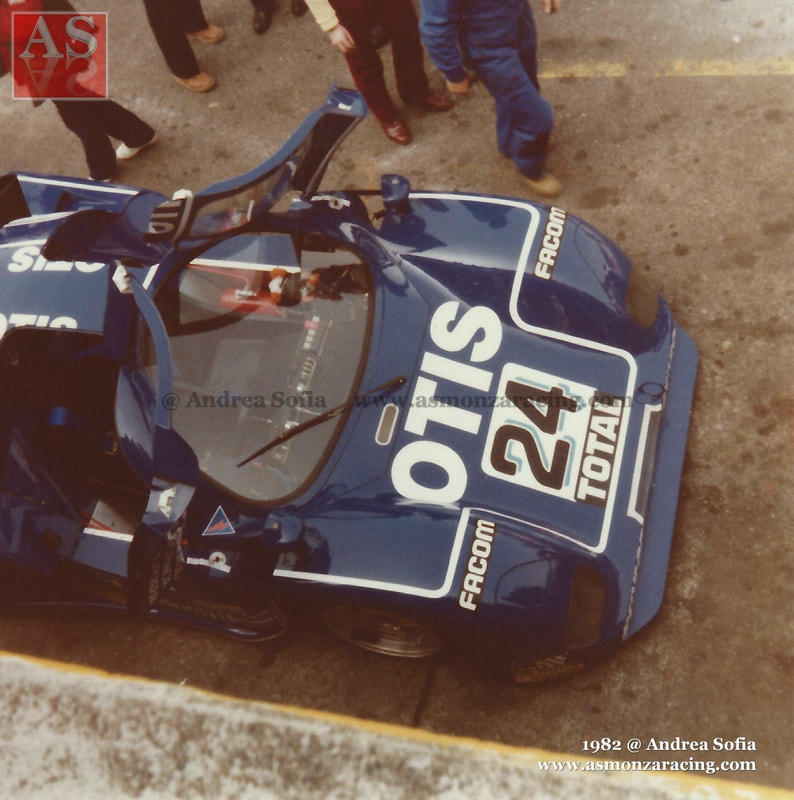 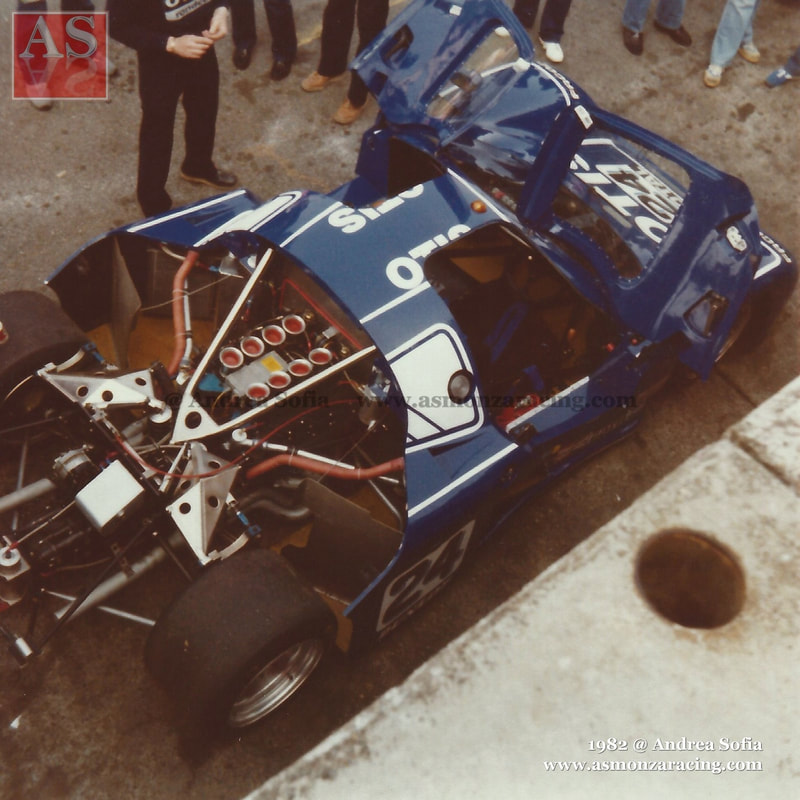 Monza 1000 Km 1982, Rondeau M382 #004 Ford Pescarolo-Francia-Rondeau
The car built by Jean Rondeau had a steel tube frame with aluminium reinforcement panels, the full stressed engine was the classic Ford Cosworth DFL  3,9 litres and the bodywork made in fiberglass. The drivers besides Jean Rondeau were Henri Pescarolo and Giorgio Francia. During the practice, despite an excessive rolling, the car was the fourth fastest and placed in the second row. In the race had a good start keeping the 3rd place and at the first stop the mechanics replaced the alternator belt. At the end of the 2nd hour, the Rondeau M382 was in the lead and stayed there until the end. At the beginning of the 3rd hour Francia stopped to pit by changing  tires that caused vibrations and with the engine miraculously intact despite an over-revving made in a gear change. But the real thrill for this team has been 6 laps before the end when Pescarolo, who was in the lead, was forced to stop at the box for a quick 15-liter refuelling, unexpectedly, and at the time of starting the slightly flooded engine did not want to get started.
Six attempts were made to resume the Cosworth DFL, with the risk to run out the battery. Real terror.
It had happened that, in the previous pit stop, just before stopping, Pescarolo remained out of fuel at two kilometres behind the pits and once the reserve pump was activated, he was stationary on the track for a minute because the fuel did not reach the injectors. Eventually Pescarolo reached the pits and after a 98-liter refuelling he restarted but the mechanics did not notice that one of the tank safety rings had been locked open and so at least 30 liters of fuel were lost along the track. The last episode that finally turned the blue of the French victory red, was lived by Pescarolo who, in an attempt to open the champagne magnum, which had broken the cap, breaking the neck of the bottle on the wall of the podium, got himself a nice cut to the right hand. 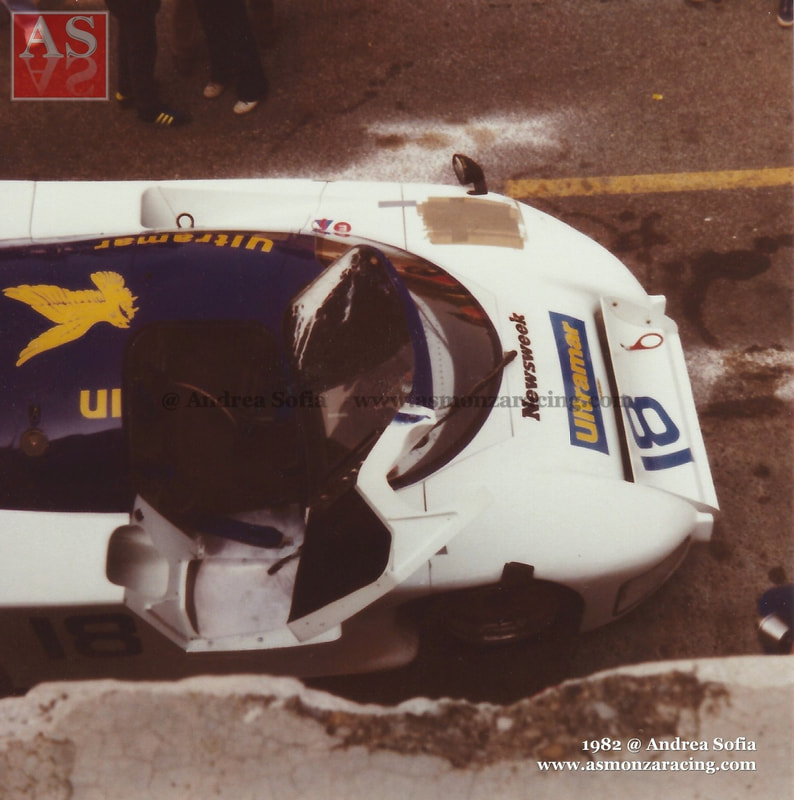 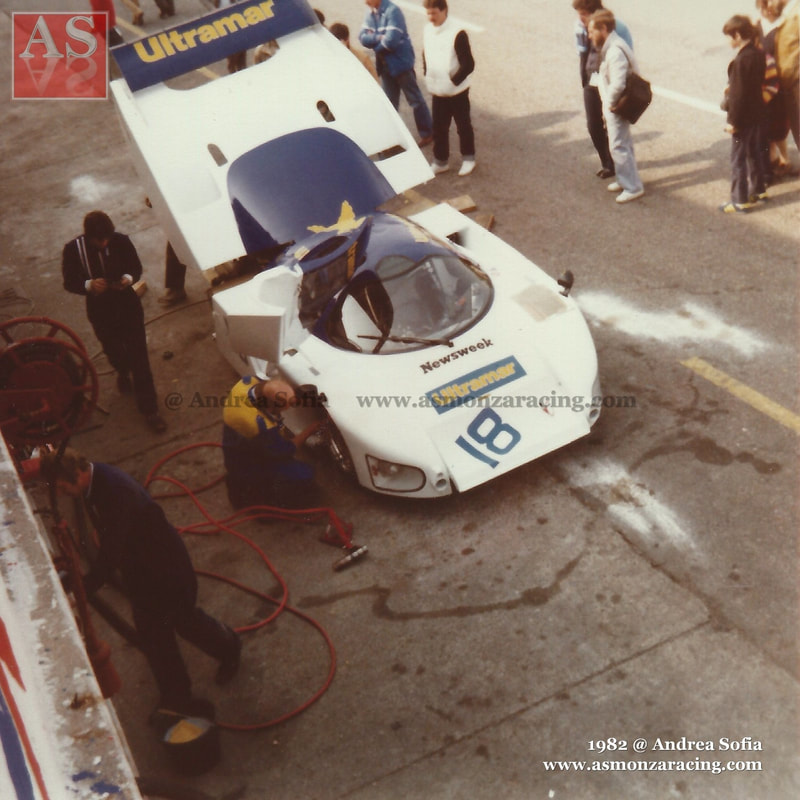 Monza 1000 Km 1982, Lola T610 Ford chassis #HU-01 Edwards-Keegan
The new Lola T610 Group C was present at Monza with the drivers Guy Edwards and Rupert Keegan ready to run the whole season. This car had a body made of honeycomb and fiberglass and an aluminium made monocoque with a carbon fibre bottom that extended until the rear wing for an exasperated utilization of the ground-effect. The most remarkable detail was the fully closed rear bodywork and the vertical fins that supported the wing mounted at a relatively low distance from the ground. The car was also equipped with movable side skirts mounted longitudinally beyond the rear wheels to improve air extraction. This system, as mobile was prohibited by the rules. During the technical checks these miniskirts had been locked, the technical marshals did not notice anything and the car was admitted to the practice but before the race, the system was unlocked and made mobile and when the marshals noticed it they disqualified the car for technical irregularities. When the team appeared on the track for the race, the track marshals tried to stop them to prevent access but when the team representatives asked for a written document and this was not provided, they forced the access to the track. At the end of the first lap he received the black flag and Edwards was forced to stop. During the practices, a small irregularity in the size of the windshield surface, foreseen by the Group C regulations, forced the team to equip the car with a small "window" located above the original windshield (visible in the photograph). The "window" was made using a piece of the windshield of an Alfa Romeo Giulietta rented by the team. 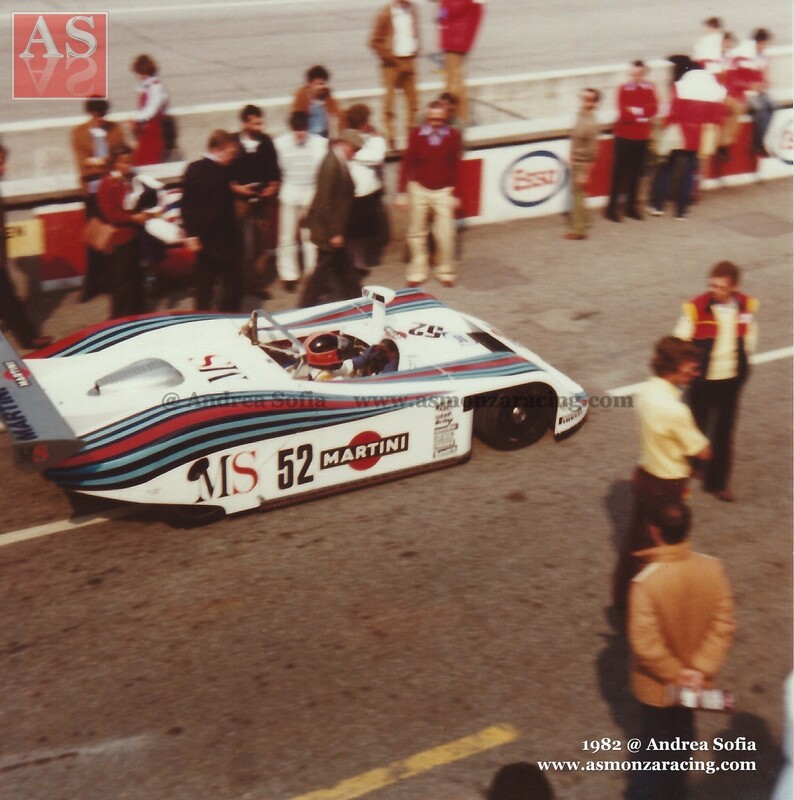 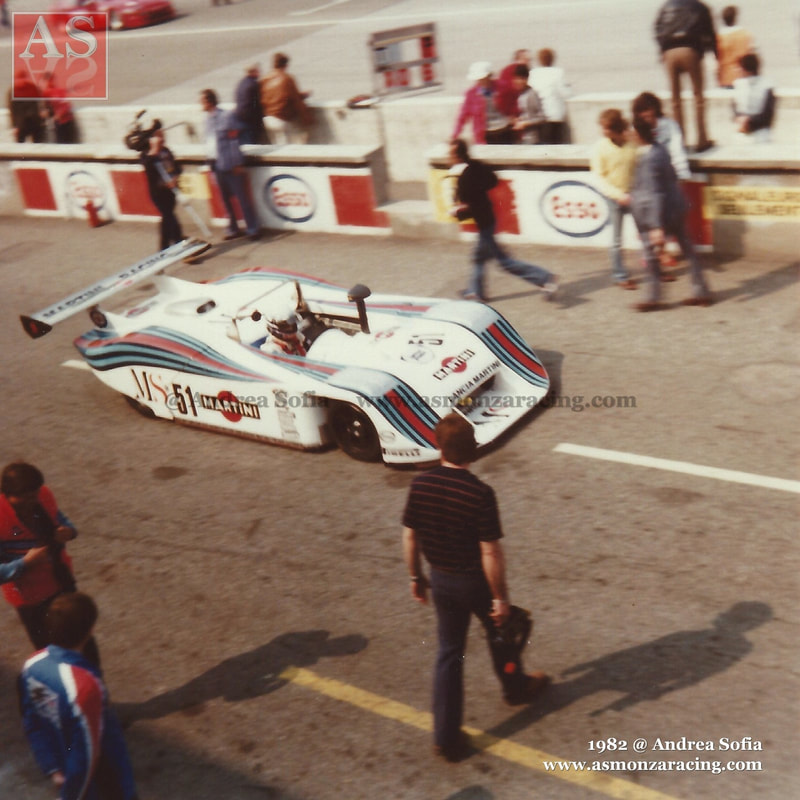 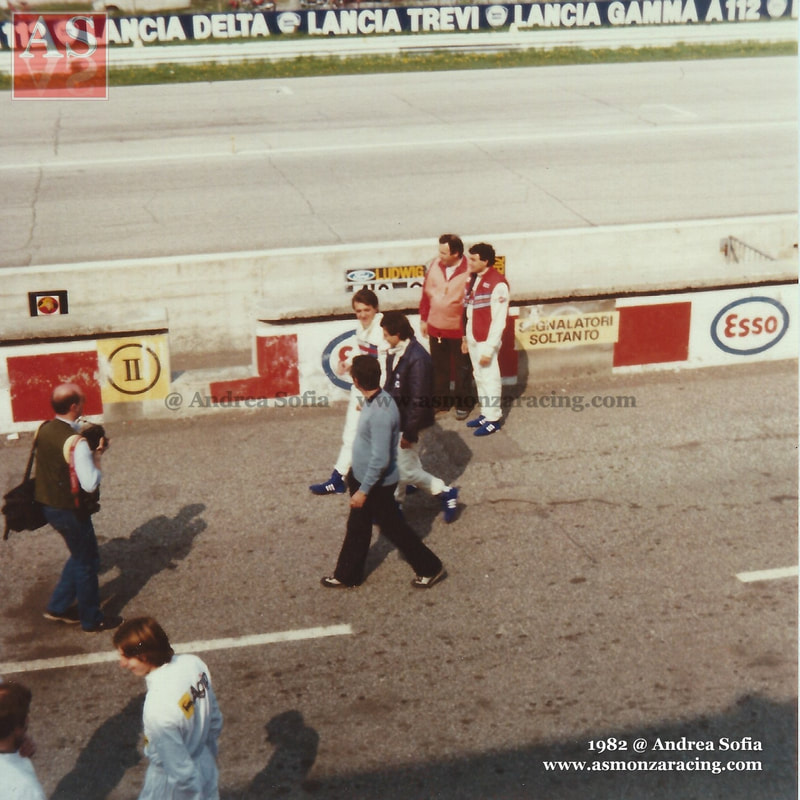 Monza 1000 Km 1982, Riccardo Patrese, Piercarlo Ghinzani and more in white suit and red jacket Michele Alboreto
Only for 1982, the rules of the World Endurance Championship permitted the use of old sports cars Group 6 in addition to the new Group C, but their scores were valid only for the driver rankings and not for the World Endurance Championship. This decision was taken in the fear that in the first year of the new Group C formula, the starting grid of the races would have a low number of cars. Lancia taken literally the regulation, however, distorting its sporting spirit and asked to Dallara to build a new Group 6 sports car which, not having to comply with the same rules imposed in terms of fuel consumption and weight as the new Group C, was potentially a winner car. Small fast and efficient, the two sports, Patrese-Alboreto's number 51, chassis 001 and Ghinzani-Fabi’s number 52, chassis  002, did not long in coming  and in practice they scored the first and second place in the starting grid. The race was a whole other history. The two Lancia started immediately in lead but after just 20 minutes Ghinzani was already in the pits for the replacement of a punctured tire and at the end of the first hour Patrese was forced to the pits due to repair the front body  which suffered vibrations. At the beginning of the 4th hour Riccardo Patrese stopped at the entrance of pit lane with the engine off due to the collapse of a brush of the Magneti Marelli ignition distributor. After twenty minutes of stopping for the replacement the team mate Michele Alboreto started but just after a lap and half, at lap 93, he stopped for the same problem along the track. Things did not get better at the car number 52, Piercarlo Ghinzani was forced to stop in the pits to replace the radiator and the front frame broken due to the bodywork vibrations that caused the nosecone to repeatedly crawl on the ground. After the stop for repair, this car, driven in that moment by Teo Fabi, was forced to surrender, stopping at the first chicane on lap 105, due to the defective ignition distributor. 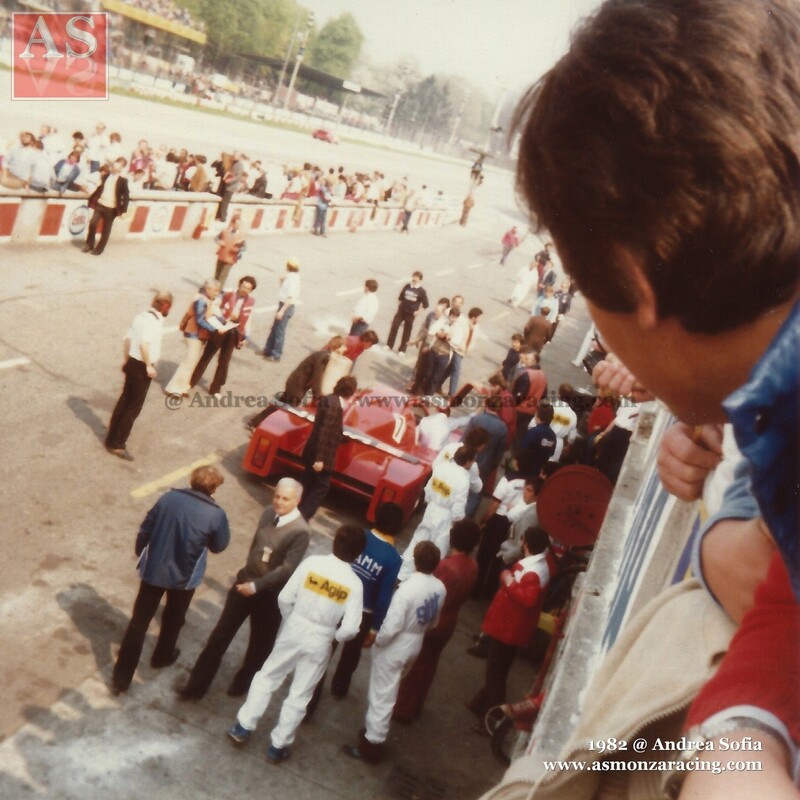 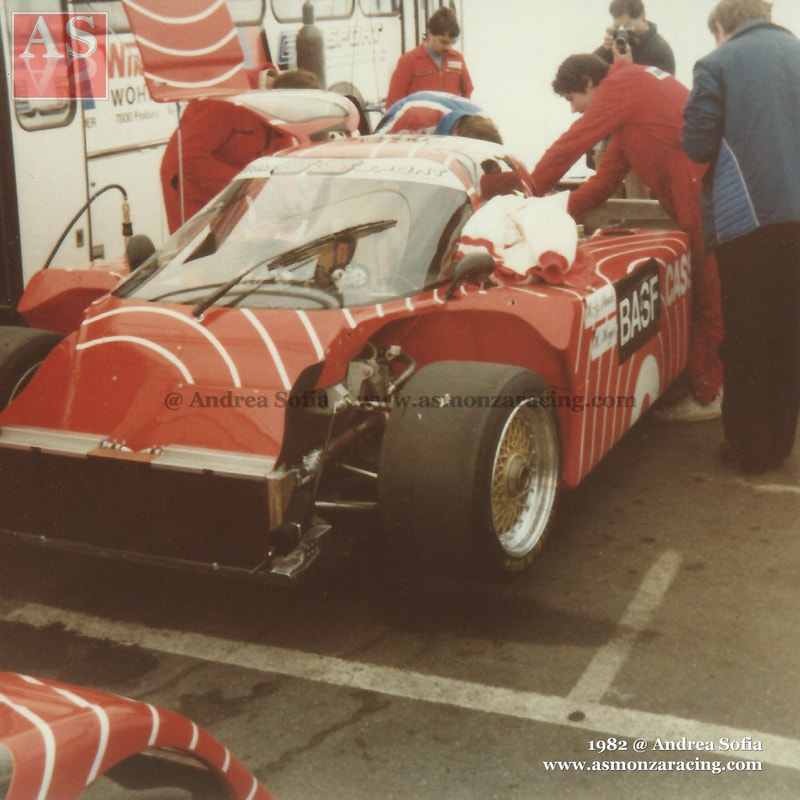 Monza 1000 Km 1982, the Sauber SHS C6 number 6 Stuck-Heyer
Ford was present at Monza with the drivers Klaus Ludwig, Manfred Winkelhock and Marc Surer, the car during the practices suffered several set-up problems having to replace anti-roll bars and rear shock absorbers several times. Eventually the car qualified in the third row with the sixth fastest time. In the race he did well at least until lap 19, when an oil pipe burst. In the pits the crew attempted a makeshift repair also using the pipe "borrowed" from a Ford Fiesta, but the damage was so extensive that every attempt was in vain. Klaus Lugwig was the only driver to bring the car into the race, the other two failed to make a lap before retiring. 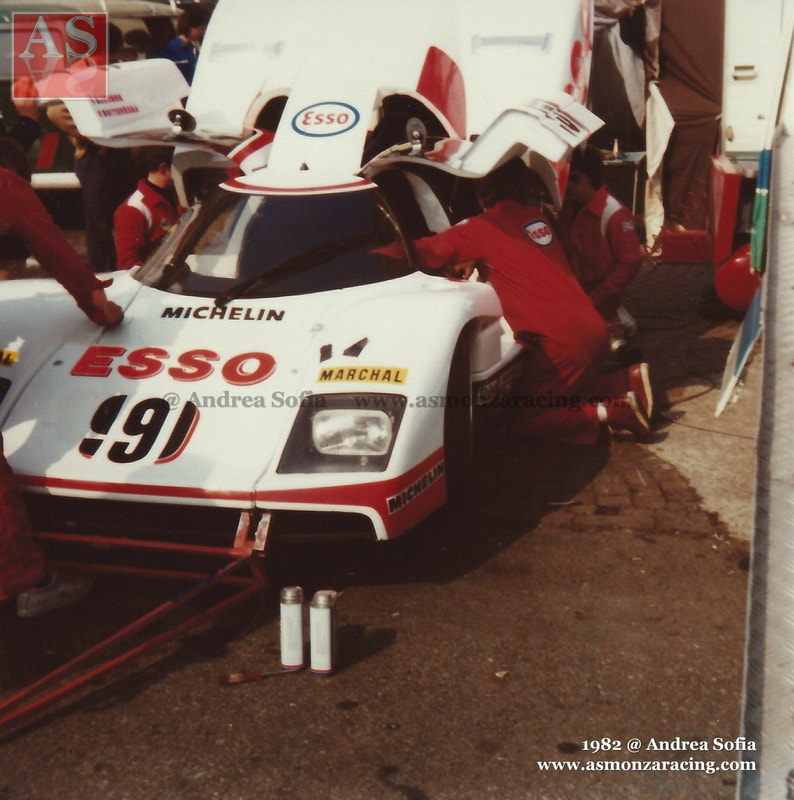 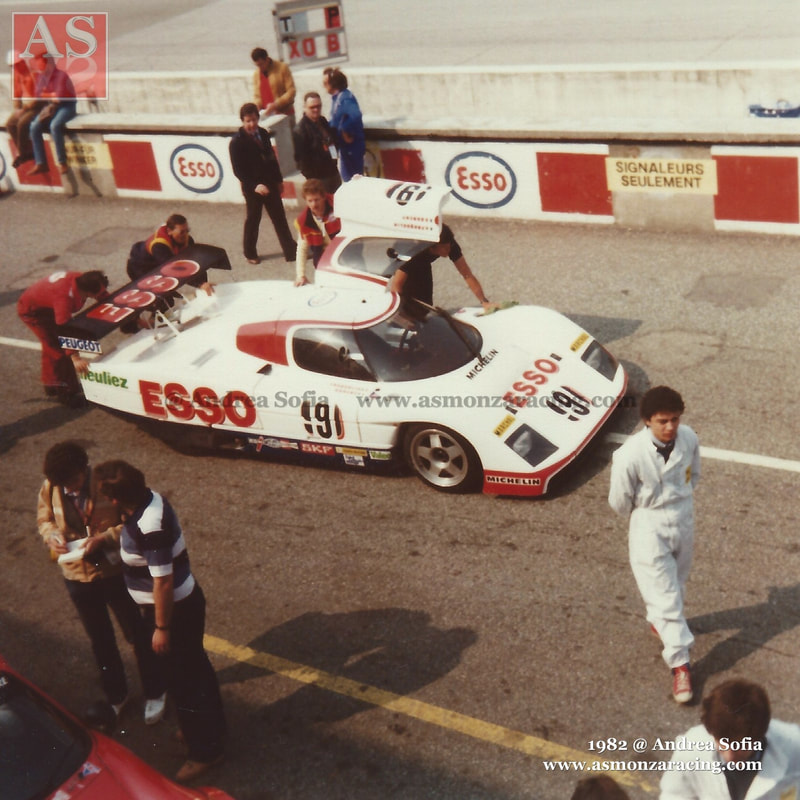 Monza 1000 Km 1982, WM P82 #01 Peugeot Dorchy-Frequelin-Raulet
The WM P82 was entered in Monza for the drivers Roger Dorchy, Guy Frequelin and Jean-Michel Raulet. In practices the car was eleventh despite a breakdown of the left turbo-compressor of the Peugeot engine suffered by Dorchy. With a regular race, the car finished sixth despite being plagued by major brake problems. In addition, the car was one with the highest fuel consumption and that forced the drivers not to push too hard to avoid running out of fuel. 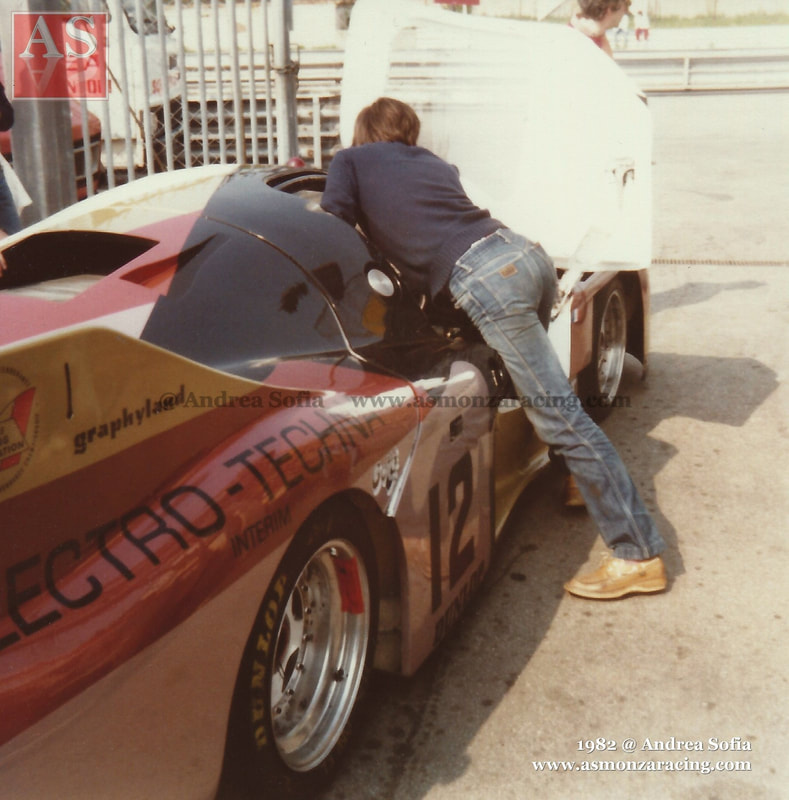 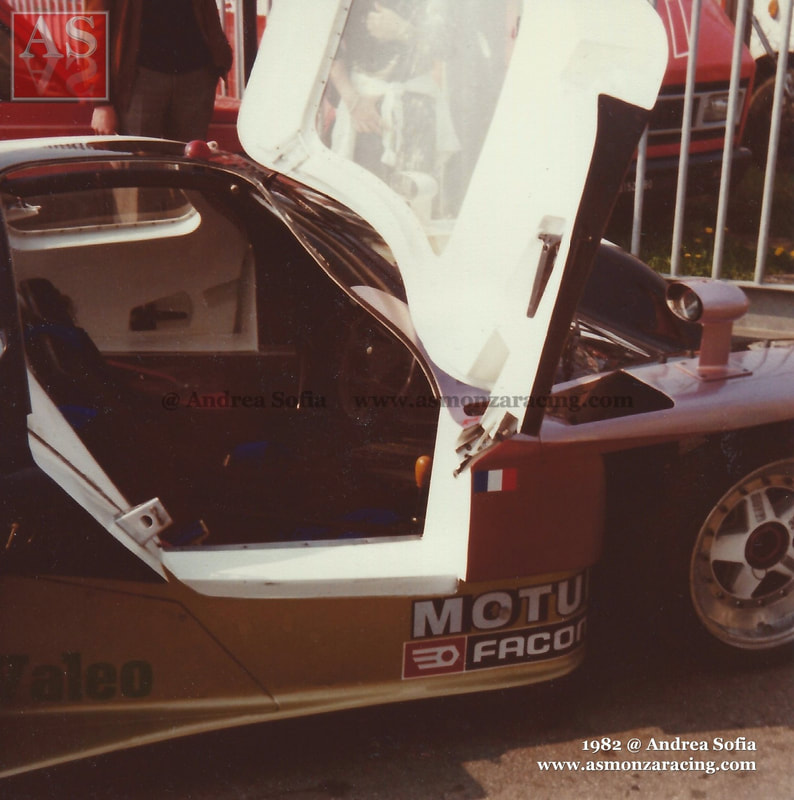 Monza 1000 Km 1982, Rondeau M382 #003 Ford Servanin-Bussi-Guerin
The car brought into the race by Francoise Servanin, Christian Bussi and Jacques Guerin, was not excellent in practice, qualified only in 22nd place, and even less in the race. The car was forced to leave from the pits because of overheating problems and the race did not last long, on lap 39 the car went off the track. 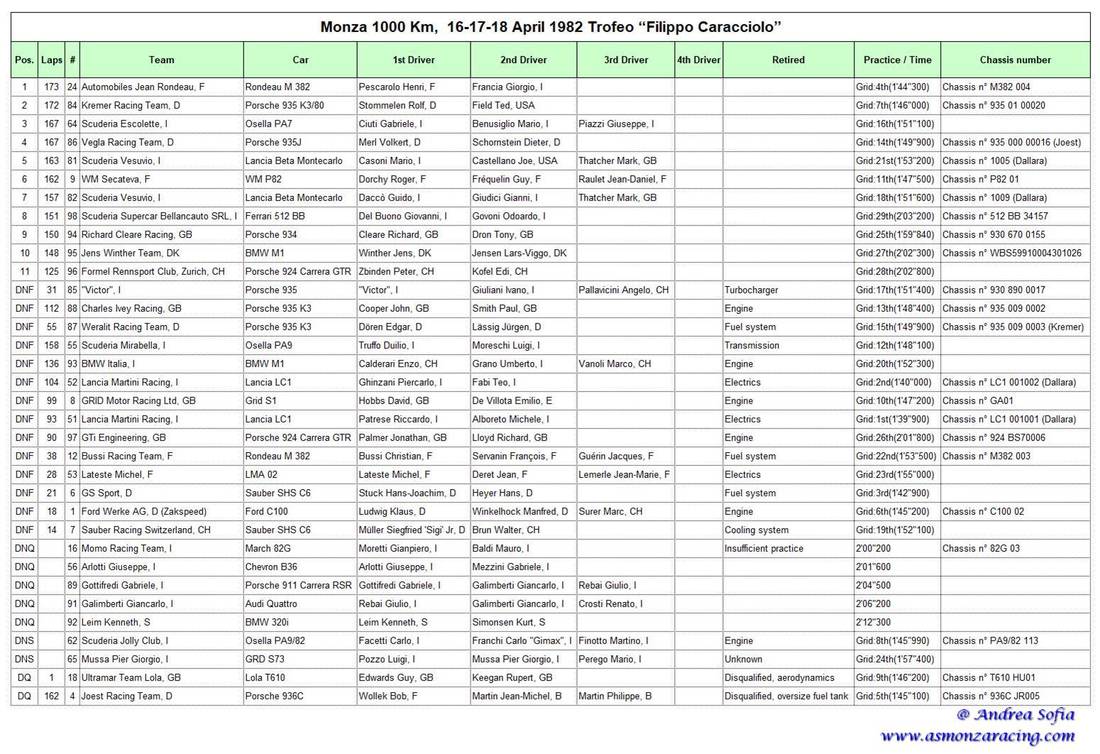 Links:
Porsche 956B #118 1984-85
Rondeau M382 chassis #004 1982
Porsche 935 K3 1979-1981
1000 Km di Monza 1965-2008 - Aldo Zana - Giorgio Nada Editore
In this beautiful book signed by the automotive historian Aldo Zana, all the editions of the 1000 Km of Monza are described from 1965 to 2008. For each race, in addition to the detailed report, the starting grid and the final ranking are shown, all accompanied by magnificent archive photographs, very often unpublished. The book is written in Italian. It is a precious and unique book especially for those who, like me, have personally witnessed several of the races described. This book is highly recommended.